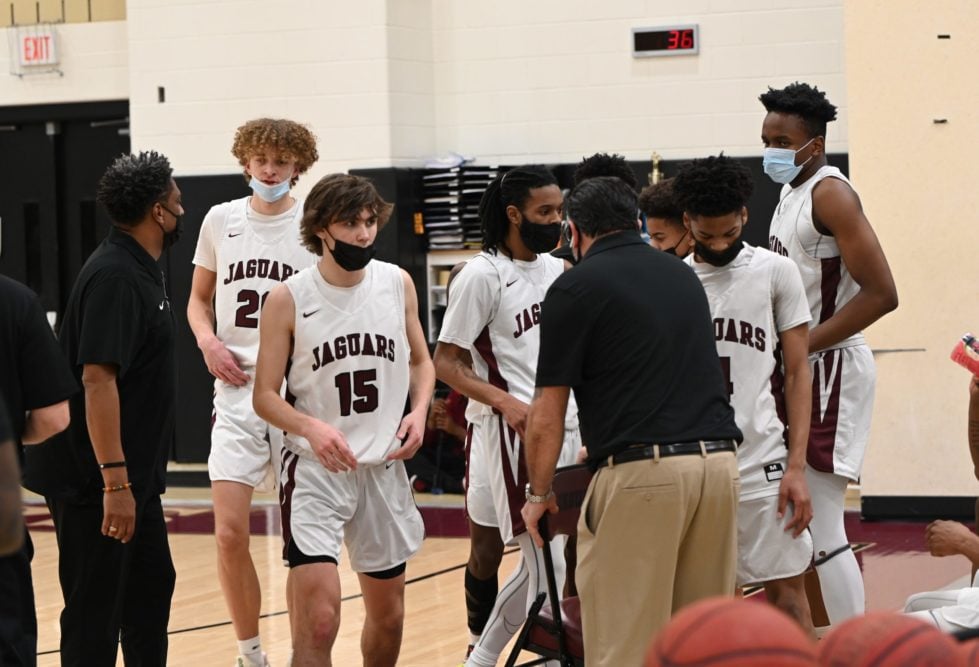 The Appoquinimink Jaguars scored 6 points at the free-throw line in the final two minutes of regulation, forced a turnover to tie the game in the 1st overtime, then outscored Smyrna 16-11 in double OT for a 64-59 win Thursday night in boys top ten basketball.

The 6th ranked Jags gained a late 1st quarter lead at 8-6, but would not lead again until the final overtime period, as Smyrna led for most of the game.

Smyrna took a 9-8 lead after the 1st quarter, and extended their advantage to 23-14 with :21 left in the half on a three point shot by Devin Demoe. Appo closed the gap to seven as Christian Barksdale made a basket with :05 left for a halftime score of 23-16 in favor of Smyrna.

The Jags opened the second half on a 6-0 run, slicing into that 7-point deficit to a single point on five occasions and tied the game twice in the 3rd quarter using an aggressive back court press. With 1:00 left in the quarter, Majesti Carter made a short jumper & fifteen seconds later, Demoe converted the traditional 3-point play to increase Smyrna’s lead to 39-33 with 8:00 left in regulation.

The Eagles grabbed a 10-point advantage early in the 4th quarter on baskets by Carter and Kevin Woodruff, but the Jags dialed up the back court pressure again, scoring 12 of the next 14 points (the final 6 at the foul line) to tie the game and send it into overtime. Eric Mathenge and Tommy Vaughn Jr combined for 8 of those 12 points in the quarter.

In the 1st overtime, Smyrna scored on a foul shot by Carter and 2 more by Demoe to gain a 48-45 lead with 2:08 left, but the Jags answered with a free throw by Vaughn and a steal by Mathenge, who made the layup to tie the game at 48 all with :38 to go. The Eagles had two chances to get the win but came up a little short on both jumpers and the game went into a second OT.

Barksdale gave Appo its first lead since the opening quarter as he laid in a shot and was fouled. His free throw put the Jags up 51-48. Smyrna answered with 2 foul shots from Carter to make it 51-50, then Appo’s pressure again forced key Smyrna turnovers. In the next :90 seconds, Barksdale, Young and Nate Burlew accounted for 7 straight points to give the Jags a 58-50 lead at the 2:00 mark. Undaunted, Demoe nailed a deep jumper and converted a free throw to cut that lead to 58-54 with 1:33 to go. Carter then forced a turnover and was fouled. He made both shots and it was a 2-point Appo lead with 77 seconds left. In the end, that defensive pressure from the Jags proved too much down the stretch. After 2 free throws from Burlew made it a two-possession game, Smyrna couldn’t convert and was forced to foul, putting the Jags at the line where they made 4-of-6 to close out the game.

Appo improves to 10-3 with the win, while Smyrna falls to 7-6. The Jags received balanced scoring, led by Barksdale (15), Mathenge (14), Vaughn Jr (13) and Burlew (10). Smyrna received a season-high 21 points from Demoe and Carter led the way with 22. The Eagles played without leading scorer Lish Gregory.