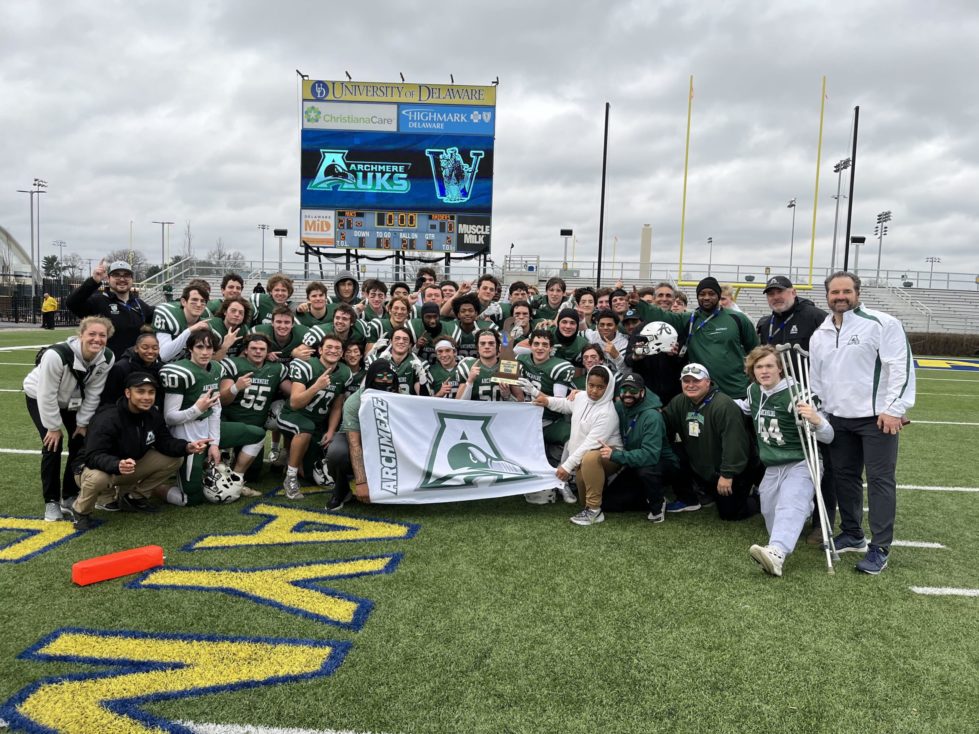 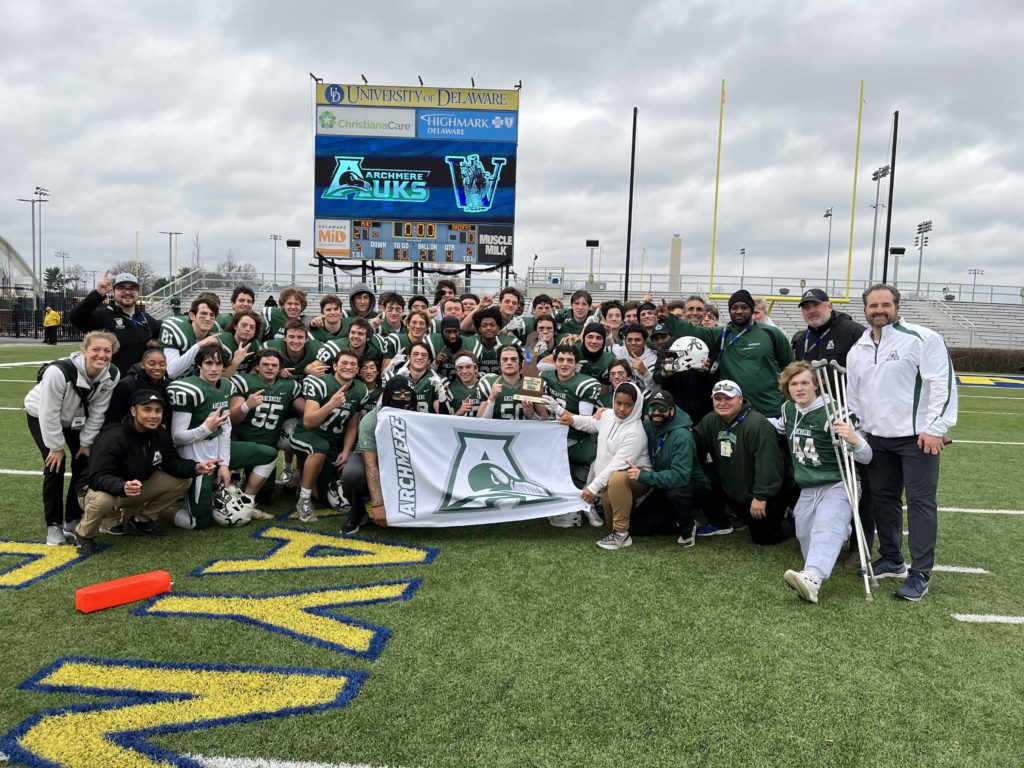 Archmere Auks won the first ever Class 2A state championship with a big win over the Woodbridge Blue Raiders.  In front of a big crowd at the University of Delaware Archmere shutout Woodbridge by a score of 27-0.

Both teams  had unsuccessful first drives that led to punts. On the second possession for the Auks they would drive down the field for their first score of the game as Declan Pearson plowed his way into the endzone from 5 yards out giving Archmere a 7-0 lead with a successful PAT kick from Chris Albero with 4:22 in the first quarter.

Acrhmere’s defense would get the offense the ball right back. The Auks defense forced the Blue Raiders into another punting situation. A high snap on the punt forced the Woodbridge punter back about 5 yards which allowed Cole Fenice enough time to come in and block the punt which gave Archmere great field position. With :12 seconds left in the first quarter Pearson got into the endzone again this time from 2 yards out giving Archmere a 13-0 lead after a failed PAT attempt from Albero. That score would conclude the scoring for the first half.

Late in the third quarter the Auks extended their lead. Johnny Kim took a handoff on a mis-direction, breaking it down the sideline for 81 yards giving Archmere a 20-0 lead with 2:40 left in the third quarter. They then tacked on another touchdown midway through the fourth quarter as quarterback Chris Albero scored on a 6 yard keeper solidifying a 27-0 victory for the first ever class 2A football state championship.

Archmere’s defense was dominating all day anchored by their leading tackler lineman Scott Lucarelli, Kevin DiGregorio, and Conor udovich. They kept Woodbridge out of the end zone coming up big in the third quarter with two fourth down stops deep in the red zone. They held Woodbridge to just 39 yards in the first half and held them to under 150 yards total in the game. 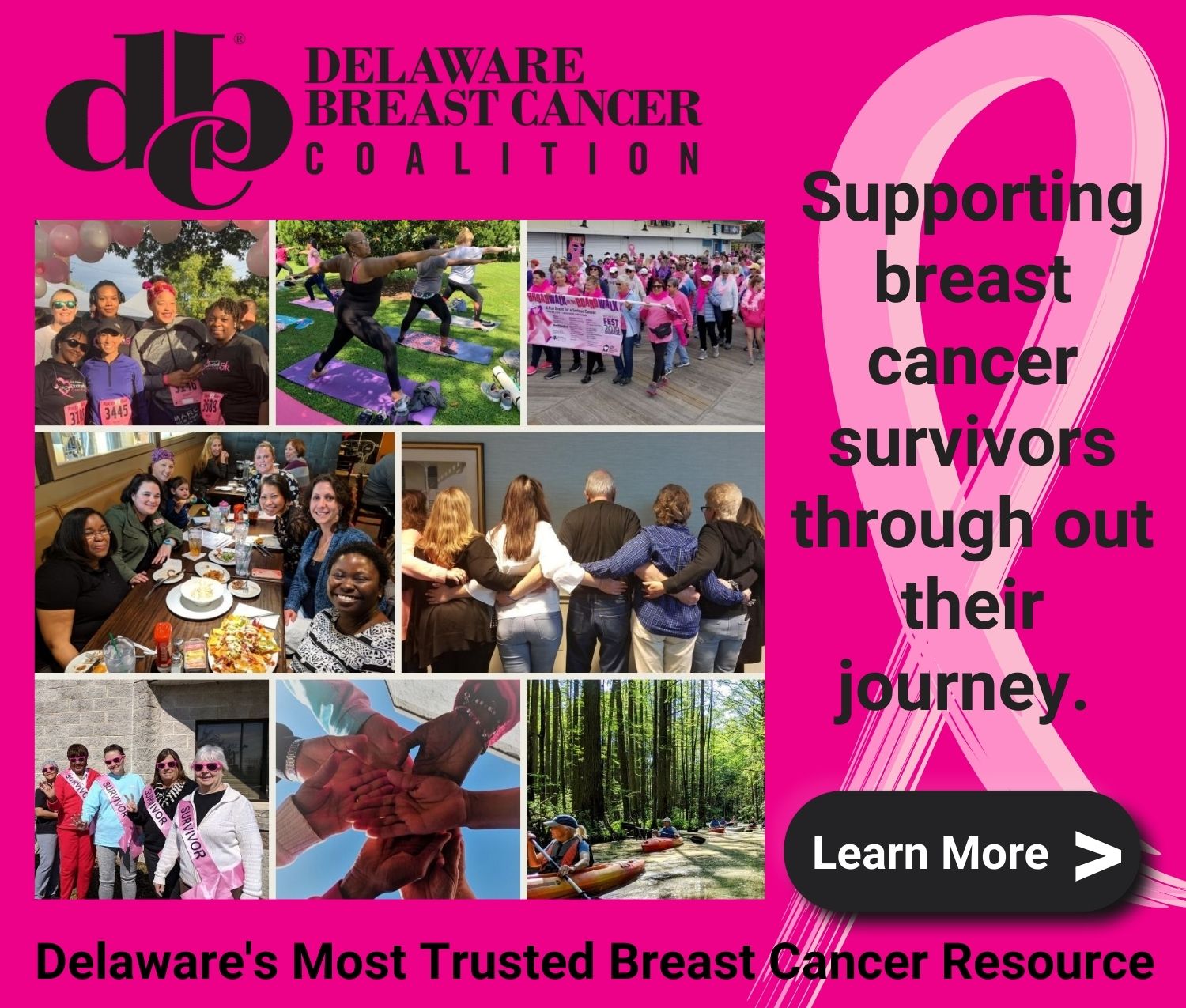