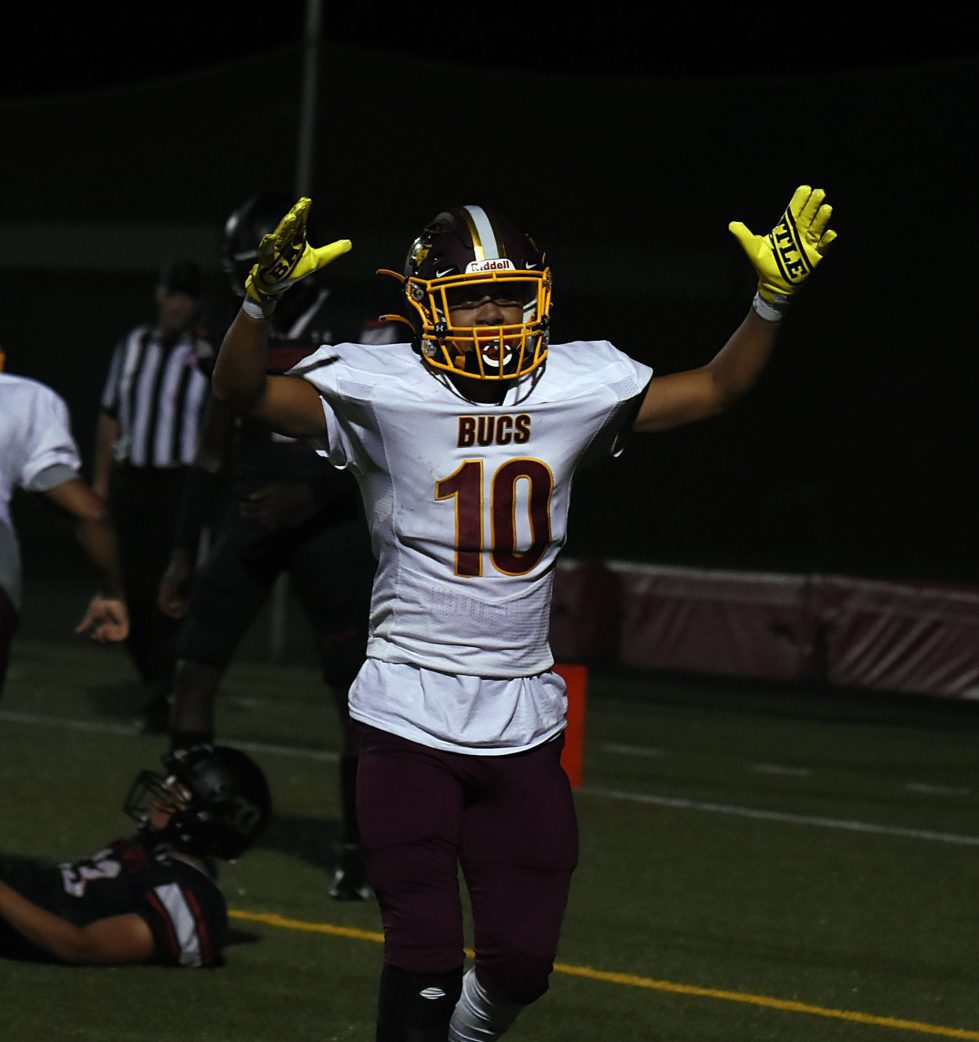 Without traffic it takes about an hour and forty minutes to get from Milford to North County H.S. in Glen Burnie, Maryland. With traffic, and there is always traffic on a Friday, it can take a lot longer. That was just the case last Friday as it took Milford’s football team about two and a half hours to get there. While they looked to be warmed up and were definitely on the field when that game started, it appeared that their minds were anywhere but on the task at hand. “I honestly don’t know what it was. We looked like we warmed up pretty good, but once the game started, we simply were not ourselves,” MHS coach Shaun Strickland said. “I don’t know if there is such a thing as bus lag, but that’s what I’m going to attribute our slow start to.”

Trying to describe a game’s first half in which Milford would finally prevail is difficult. It wasn’t that it was bad, Milford just made massive mistakes in big moments. Despite all the pitfalls, the Bucs created for themselves in the first half of a 53-33 victory, they proved to themselves and anyone else watching that they won’t quit. If they make a mistake, OK. If they fall behind, OK. If they aren’t playing their best, that’s OK too. Because they believe in each other and have an offense that can put up points in a hurry, against good defenses. “We never got down on ourselves. We made some mistakes in the first half, but the answer was always the same. Let’s get those points back,” Bucs senior quarterback Shawn Saxon stated.

The game started with Milford on the defensive, as the host Knights began the game’s opening drive on their 40-yard line. North County looked bigger and stronger up front on both sides of the ball. It did not take them long to assert their offensive prowess as it took them just three plays to open the game’s scoring with a 35-yard touchdown pass. The quick score moved the Knights into a 7-0 advantage just 1:30 into the game. It was at this point Milford began to rub the sleep out of its eyes. With Milford working the ball to around midfield, senior Aaron Sivels ripped off a 55-yard touchdown run just three minutes later, but a failed PAT would keep Milford trailing 7-6.

It was at this point in which Milford tried its best to give the game away. After forcing a three-and-out, the Buccaneers could go nowhere. After the teams exchanged punts, North County went on an 80-yard drive, marching right down the field and demonstrating superior strength and size along the front lines that Milford would eventually have to overcome. On the ensuing drive, Milford would go nowhere, forced to a three-and-out in its own territory. A dropped snap on the punt allowed the Knights to set up shop deep inside Milford territory. It wasted no time as North County made the score 21-6 with 6:45 remaining in the second quarter.

Milford needed to respond, and it needed to respond quickly. What transpired over the rest of the first half was a lesson of football dos and don’ts that may serve the Buccaneers well for the rest of the season. One thing was for certain, they were awake now, it was how they would channel this attitude which was important. There was no finger pointing, now blame, it was just “Let’s get ourselves in gear and win this game,” Strickland said.

What transpired over the next six minutes was a flurry of football which I have never seen in my more than 12 years of covering Milford football. The Bucs would start their comeback on the very next series. Setting up on its 35-yard line, Milford struck quickly as Saxon connected on a quick outside slant to junior Andrew Kravitz, who took off like a rocket and never looked back, as Milford closed the gap to 21-14 with the two-point conversion.

Then it happened. The Buccaneers special teams continued what would be a horrible night as they gave up a 65-yard touchdown return on the ensuing kickoff making the score 27-14 following a failed extra point attempt. Not to be deterred, Milford would take the ball 60 yards down the field, with Sivels taking the ball in from 13 yards out to make the score 27-20 following another Milford missed extra point with 4:54 remaining in what was rapidly turning into a track meet.

North County responded immediately with another kickoff return for a touchdown, this time from 80 yards out. Milford almost allowed another touchdown return later in the game, with Bucs senior kicker Alexander Nash making a shoestring tackle at the Milford 25 to prevent the score. Speaking with Coach Strickland on Sunday, after he had a chance to review the film, he believes he understands where the changes need to be made with regard to special teams. “To call what happened Friday night bad would be an understatement. We have players playing both ways and try to give them a breather on special teams. The problem was the guys on the kickoff team simply didn’t rally to the ball. They didn’t seek contact and they didn’t do their job. We are not going to put up with that, we need football players out there and a lot of the guys simply did not get it done on Friday, that will change.”

With the score now 33-20, with 4:24 remaining, it was up to the Bucs to answer, and answer they did. Saxon would find Kravitz again on a 45-yard strike and just like that, Milford had closed the gap to 33-26, with just over three minutes remaining in the half.

Milford was able to keep the Knights on their own side of the field, finally giving its defense a chance to play. The Buccaneers responded by forcing a fumble with the Knights driving, returning it deep into the host’s territory. Saxon responded again, this time hitting junior Averi Copes with 1:06 left, and with a successful PAT Milford found itself ahead 34-33 as the first half finally ended.

After all the mistakes and mishaps during the first quarter, Milford somehow took the lead into the locker room. Most of it was due to the Buccaneers’ passing attack, which is developing into a formidable weapon. While Saxon may be at the helm, he has a plethora of receivers who can step up and make plays. This talented passing game is going to make or break the Bucs this year. With two touchdown catches in the game, Kravitz is the most talented of a deep group, including Sivels, Dwayne Wiltbank, Jordan Norman and Ryan Mejia, just to name a few. “We believe in each other, we can all catch the ball and make plays. There are so many of us and we are always trying to pick each other up. Trust me, we are deep. You will see guys sixth or seventh down on the depth chart making catches at big times,” said Kravitz, who would end up with two touchdowns on the night.

The second half would play out much differently than the first. The game would remain tight as the defenses would take over. Milford eschewed the punt, even going for it on fourth and five from its 33- yard line and failing to make it, as Strickland could feel his defense starting to heat up. “They (North County) played tough the entire game, but I believed in our defense the entire game and they rewarded me with a scoreless second half.”

With both defenses playing firm throughout the third quarter, the score remained 34-33 as the time wound down. As the stalemate continued, the tension began to build. It would finally be broken as Saxon would find Mejia on a 42-yard go pattern down to the Knights 13-yard line. From there, Sivels would take care of the rest of the work and finally give the Buccaneers some breathing room with a 13-yard touchdown run with the PAT increasing the advantage to 41-33.

Sivels would score from 30 yards out, with 4:24 left in the game to seal the deal for the Buccaneers. He would also take an 80-yard run up the right side in the game’s final minutes to complete the game’s scoring.

The win wasn’t pretty, it wasn’t easy, and it was just what the Buccaneers needed, as they head into their Division 2A schedule. With the DIAA aligning to three divisions this year, Milford has been placed with some traditional rivalries as well as some new teams, such as a revitalized Red Lion, an always stout Mount Pleasant along with an always competitive Caravel Academy. Familiar foes will include Delmar, Woodbridge and rivals Lake Forest, who the Bucs will face off against this week in the annual Battle of The Bell. While traditionally the season’s final game, Milford hosts the Spartans Thursday at 6:30. Speaking with Strickland, he believes both teams will be ready to put on a show. “Hey, these teams both respect each other and both want to win the game. Game one, game ten, it doesn’t matter. Both teams are going to go after it. This year however, it means a bit more. The playoff system has changed, so the team that loses the game, will already be behind the eight ball. This game is huge for both teams,” he said.