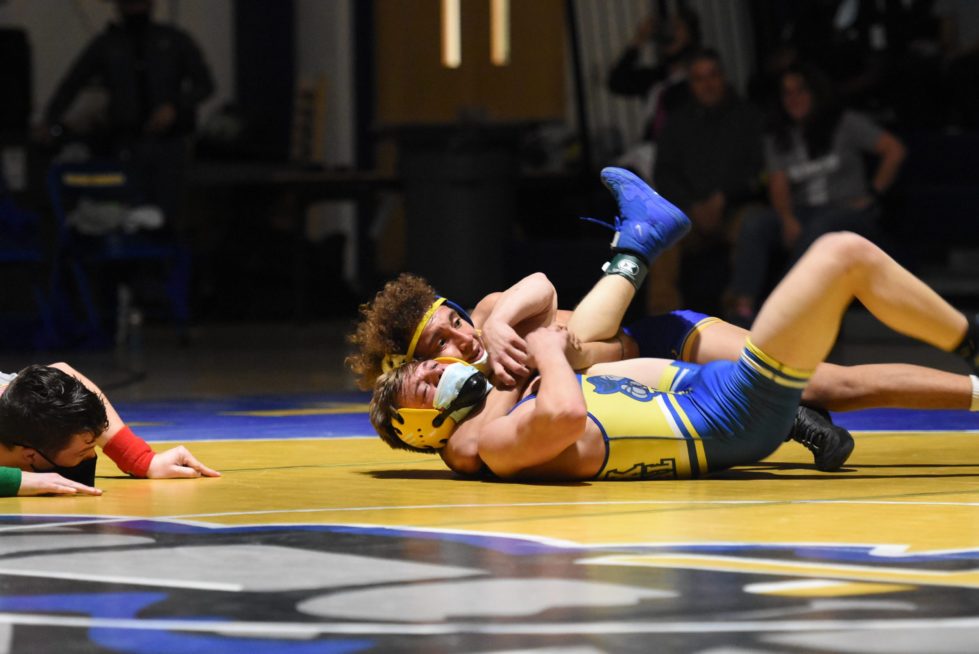 Caesar Rodney’s M’Ja Smith locks up a cradle on Evan Broomall in their 132 pound match. Smith earned a pin in 516.

Georgetown – Cody Waski went out onto the mat at 145 pounds with the weight of his Riders teammates on his shoulders in the final bout of the night. Caesar Rodney was trailing 34-31 with criteria not in their favor, Waski knew he needed a bonus point win for the Riders to prevail in their Henlopen Conference Northern Division opener.

“Honestly I just knew the team had made a comeback and I needed to go out and finish it off, I have been looking forward to being in a moment like that for a long, long time,” Waski said.

Caesar Rodney trailing 34-16 with just four bouts left in the match the Riders needed to win out and win out with at least seven bonus points.

Dylan Bennett got the Riders comeback started with a pin at 126 pounds in 1:23. In one of the night’s most exciting bouts M’Ja Smith trailed Evan Broomall 3-2 at the start of the third period. Smith scored a takedown and then locked up a cradle and settled in for the pin in 5:16 closing the score to 34-28.

“We have been working hard and during the break before the third period I looked over at my teammates and knew I had to go out and get it done for them. We call it cradle crazy at practice and work on it all the time,” Smith said.

Cameron Cataldi won a 14-8 decision at 138 pounds, setting the table for Waski in the final bout.

“This is what high school wrestling is all about, we had a combined effort tonight coming off of a barnburner on Monday and I challenged the guys to come out and find a way to dig deep. We came out on the other end of it tonight and I am just happy for them,” Rigby said.

The night started with the two teams trading wins, Sussex Central’s Caden Cope won the opening bout of the night 10-4 at 152 followed by the Riders Jaxon Kopp winning a 17-7 major decision at 160 pounds. Kopp scored a takedown and nearfall points with just five seconds left in the match to give the Riders a bonus point that would turn out to be big at the end.

“Jaxon’s late takedown was big, you know we are just happy he is winning the match because we knew it was going to be tight and he comes up with a takedown that makes a difference in the end,” Rigby said.

The Golden Knights reeled off three straight wins early in the match with Ivan Neal (170) with an exciting 7-5 decision then defending state champion Josh Negron (182) getting a 44 second pin followed by Gabe Cannon (195) receiving a forfeit giving Sussex Central an 18-4 lead.

“Ivan stepped up and performed tonight and started that little rally that gave us a nice lead at that point,” Sussex Central head coach Shane Miller said.

The Riders Josh Dyer (220) and Bobby Meister (285) cut the Central lead to 18-16 with a pair of pins before the Golden Knights lightweights swung the bout back in their favor. Malachi Stratton (106) and Chase Murray (113) scored pins before Evan Cordrey (119) earned a 13-2 major decision giving Sussex Central their final lead of the night at 34-16.

“We were proud of our guys coming out and getting bonus points in matches tonight, but then we gave some back. We worked on it this week because I felt we gave up a lot of bonus points at the Ray Oliver tournament and that came back and bit us tonight,” Miller said.

Caesar Rodney improves to 1-1 and will compete in the Milford Invitational this weekend while Sussex Central starts the season 0-1 and will head to the Delmar Invitational which starts on Friday afternoon.