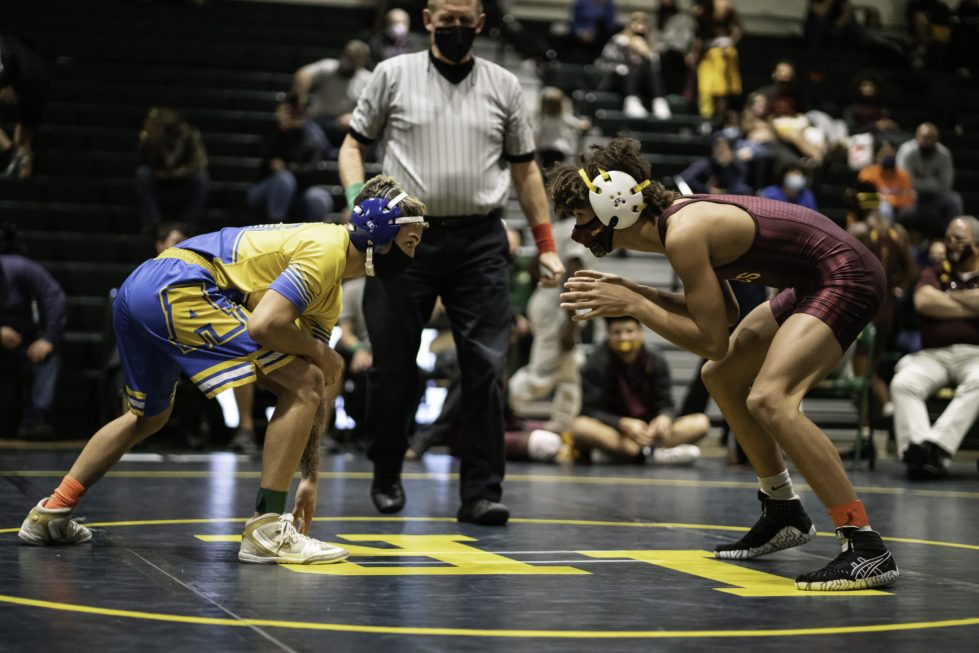 Milford– Caesar Rodney recorded five straight pins early in the match and then held off Milford for a 43-28 victory in a Henlopen Conference Northern Division wrestling match.

The Bucs Ryan Mejia began the dual with a first period pin at 152 pounds followed by a 7-0 decision by Averi Copes at 160 pounds as Milford took a 9-0 lead to start the match.

Dixon’s pin gave the Riders a lead that they would not relinquish for the rest of the match.

“I think the early pins took the pressure off of the guys that had to finish, it was different than like the Sussex Central match where it came down to the last match,” Dixon said.

As the match headed into the lightweights Alex McEvoy recorded a technical fall at 106 pounds stretching Caesar Rodney’s string of wins as well as the match score to 35-9.

The Bucs Vincent Jenkins ended the Riders run with a pin at 113 pounds followed by Trevor Copes 14-5 major decision at 120 pounds. Milford cut the match score to 35-16 with four bouts left.

The Riders Dylan Bennett sealed the victory with a technical fall at 126 pounds giving Caesar Rodney a 40-16 lead.

Jack Thode (132) recorded a pin for the Bucs and Aaron Briscoe won an exciting 3-1 decision over M’Ja Smith at 138 pounds.

Cody Waski ended the night with a 9-2 major decision at 152 pounds as the Riders improved to 2-1 in the Henlopen North.

“It was a great match, we were ranked three and four so this should help our seeding in the state tournament,” Dixon said.

Milford suffered their second consecutive loss and fell to 9-2 on the season.