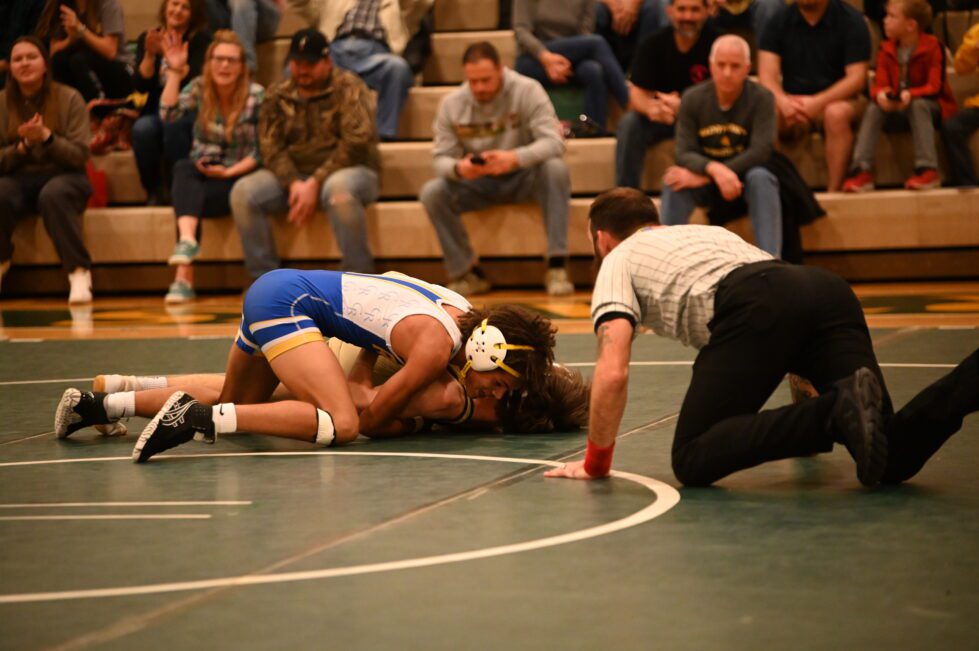 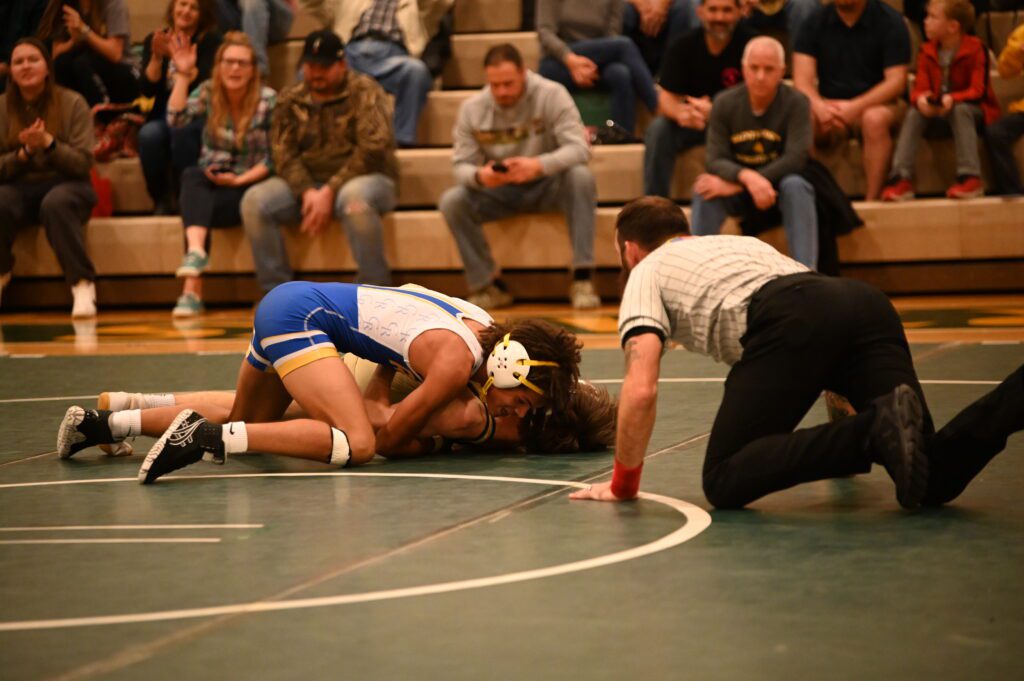 Pike Creek – The formula to winning a wrestling dual meet is simple. Find seven pinners on your team and then at least one that can stay off their back. The Caesar Rodney Riders used that formula to win their season opening non-conference match over St. Mark’s 46-30.

The Riders won seven matches by pin and picked up a major decision in one other match. St. Mark’s recorded four pins in the match.

“We definitely needed those seven pins tonight, I like my guys going out after pins. It can make a difference in the match like it did tonight,” Caesar Rodney head coach Trey Mitchell said.

With the match starting at 132 the Spartans took the first bout with Aaron Menickella won a 3-1 decision over Nate Moore. The Riders answered with a 21-9 major decision by Dylan Bennett over Alec Baxley at 138 pounds and then Jaxson Kopp secured a pin in 5:28 at 144 pounds.

The two teams traded pins with St. Mark’s Keigan Barnes got a pin in 1:59 at 150 pounds and the Riders Cam Cataldi responded with a pin at 157 pounds in 2:28 giving the Riders a 16-9 lead after five bouts.

The Spartans took the lead back with consecutive pins by Vinny Hurst at 165 pounds and then Luke Spoor at 175 pounds giving St. Mark’s a 21-16 lead at the midway point of the match.

The Riders responded with a pair of pins of their own as Owen Dixon secured a pin at 190 pounds in 1:03 and Owyn Meister at 215 in 23 seconds. Spartans 285 pounder Aiden Zellman’s 43 second pin got St. Mark’s back on the board as the Riders led 28-27 heading into the lightweights.

“I’m really proud of our effort, they (Caesar Rodney) are a great team, we are young and talented and we had some key match ups, some key wins tonight. I’m really impressed with my guys and really looking forward to the rest of the season,” St. Mark’s head coach Cam Butler said.

Clif Backsh avenged a loss from last season with a 9-3 decision at 106 pounds over state finalist Alex McEvoy giving the Spartans the lead 30-28.

“I liked the fight in my team tonight, St. Mark’s came out like a ball of fire and brought it. That’s the whole reason we came up here to wrestle them to get good competition and we did,” Caesar Rodney head coach Trey Mitchell said.

The Riders closed out the match with three consecutive pins coming from Cole Moffett (113) in 1:49, Nick Moore (120) in 1:10 and Trevor Copes (126) in 1:01 giving Caesar Rodney their first win of the season as well as Mitchell’s first win of his career.

St. Mark’s will head to the Penn Manor Tournament this weekend and return to dual meet action next Wednesday when they host Conrad.

Caesar Rodney will compete in the Milford Invitational on Saturday and then begin Henlopen Conference action next Wednesday at defending state champion Cape Henlopen.

“We will get back in the room tomorrow and get back to work. We have the Milford Invitational on Saturday before we head down to Cape next week. We look at it as another opportunity to wrestle and get better,” Mitchell said.