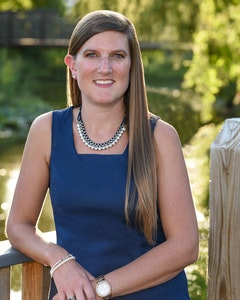 The City of Milford recently hired 2004 Milford High School graduate, Sara Pletcher, for the newly created Economic Development & Community Engagement Administrator position.  In this role, Pletcher is responsible for planning, directing, and administering comprehensive economic development and business assistance programs for the City. She will also work closely with the business community/civic organizations and serves as the City’s designated Public Information Officer.

“Sara has extensive experience in the Milford business community and her past work in promoting Downtown Milford is an example of her passion to see economic growth in this area,” said City Manager Mark Whitfield. “Promoting our City’s potential for business opportunities will be a key function of her position. Her marketing background will serve the City well and we are excited to have her part of the Milford City team.”

Pletcher joins the City after four years at Zephyr Conferences as the Conference Operations Manager, where she managed five international beer, wine and food conferences, as well as six and half years at MilfordLIVE as their Publisher.  Prior to joining Zephyr, Pletcher was the Promotional Marketing and Communications Manager at Milford-headquartered GROWMARK FS, LLC.  She was previously the President of Downtown Milford, Inc. (DMI) and served on the City’s Planning Commission for four and half years.

“I’m excited to be working for the City in this new role and commend City Council for their foresight in funding this position,” Pletcher said.  “I am ingrained in the success of the City and fully understand the potential this position can bring to the City, its business community and community at-large.”

A 2008 graduate of Immaculata University in Chester County, PA and 2016 graduate of Wilmington University, earning her master’s degree in Marketing Management, Pletcher resides in Magnolia and enjoys playing with her Weimaraner puppy, volunteering on DMI’s Promotion Committee, shopping local and exploring craft breweries.