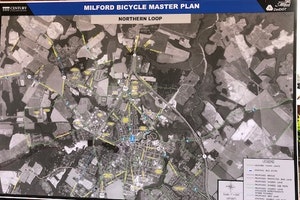 TAP Project, a partnership between the City of Milford and DelDOT will bring sidewalks and bicycle paths with construction planned to begin in 2021

During 2021, motorists in Milford will deal with several road construction projects as the city plans to begin new projects while completing others that began in 2020. City Manager Mark Whitfield explained that Public Works is following a 5-year CIP plan for these projects.

“The area of Mispillion Street, McColley and Marshall will have an extensive reconstruction project that will include some water and sewer work, storm sewer work, new curb and sidewalk, and new paving,” Whitfield said. “They are some of the worst streets in the city. Southeast 2nd Street has been turned over to DelDOT to complete the remaining work which include ADA ramps and new paving as the city has completed all waterline and sewerline work.”

Whitfield explained that the city will be completing sewer rehabilitation which will primarily be internal work that requires excavation on Northeast Front Street as well as installing a new waterline from Washington Street to just east of Rehoboth Avenue.

“The existing waterline is an old asbestos-cement pipe and it will be replaced with PVC pipe,” Whitfield said. “The waterline work will be completed this winter and spring. DelDOT will be bidding the TAP project which includes streetscaping, sidewalks, curb, new paving, bike lanes, sidewalks and more from Washington Street to Northeast 4th Street. Funding for the city street projects came from Municipal Street Aid in the form of gas tax money via DelDOT as well as the Real Estate Transfer Tax revenue. The Northeast Front Street project is a TAP project with 80 percent funding coming from the Federal Highway Administration through DelDOT. The remaining 20 percent will be from Real Estate Transfer Tax. This work will begin in late spring and go through the winter of 2022.”

TAP, which stands for Transportation Alternatives Program is a multi-phase project that will add new bicycle and pedestrian paths along Northeast Front Street. In May, DelDOT and the City of Milford held workshops at the Milford Library asking for public input for two designs that were being proposed. The designs show sidewalks on different sides of the street as well as different landscaping to improve the streetscape of one of the main arteries in and out of Milford. The roadwork planned will be the first of four likely phases to begin installing those pathways and sidewalks with the next phase to be from Northeast 4th Street to Rehoboth Avenue. Whitfield stated that Church Street to Maple Avenue would follow with the final phase from Maple Avenue to Dupont Highway. The street projects are not the only infrastructure changes planned for Milford in 2021.

“We are in the process of drilling a new well at our 10th Street facility, east of Route 1,” Whitfield said. “This well will replace Well #1 which is the big concrete structure along Washington Street across from the library. Well #1 is nearly 90 years old, and we have had numerous problems over the past several years with production, casings and screens. Once the new well at 10th Street is deployed, we will decommission Well #1. We continue to replace HPS streetlights throughout the town with LED lights and are about 50 percent complete. Hopefully, with voter approval we will break ground for a new Police Station in December 2011.”