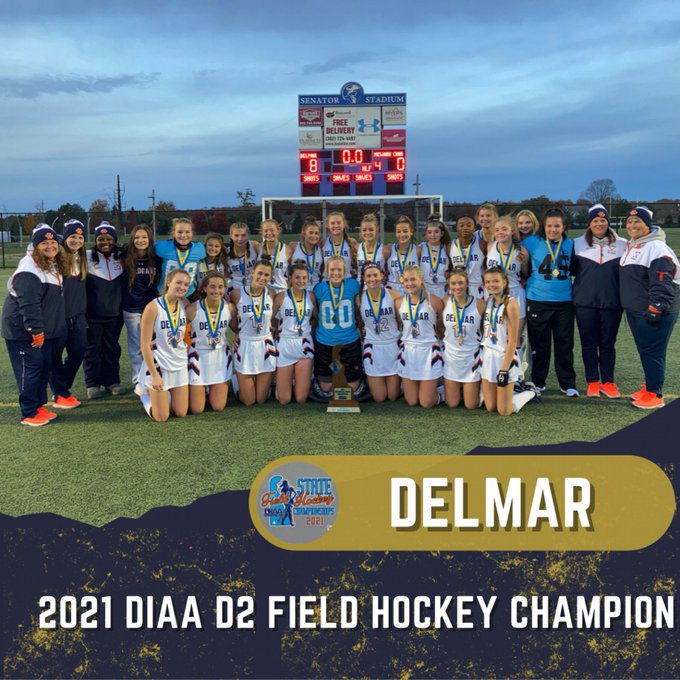 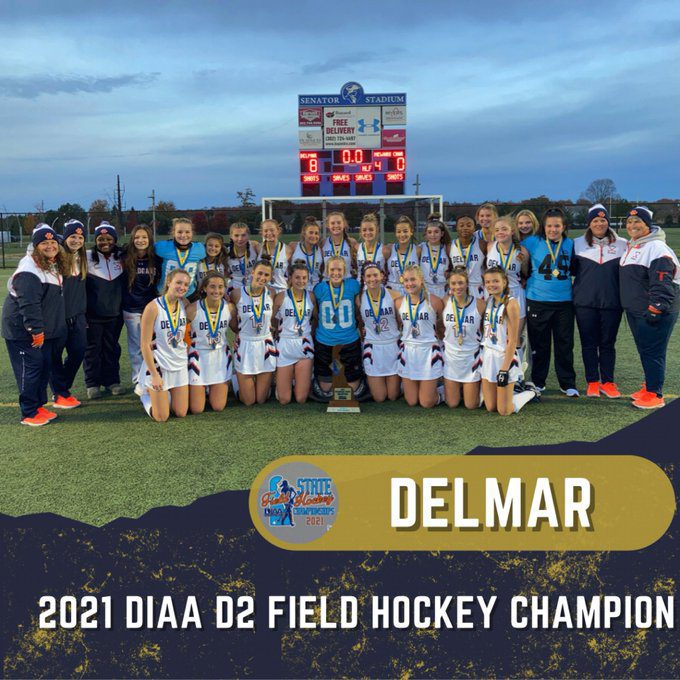 (Dover)  The Delmar Wildcats proved they are deserving of a top ten national ranking as they won their state record sixth consecutive field hockey title, 8-0 against Newark Charter Saturday.

A large crowd was in attendance at Dover High’s stadium to see Coach Jodi Holloman record her 211th win since she took over the position in 2009. Her Wildcats are ranked 2nd in the Mid-Atlantic Region’s latest poll and 9th in the country, according to “Maxfieldhockey.com”. Division I champ Cape Henlopen is also in the top ten regional rankings at #5, giving the small State of Delaware two programs receiving high accolades from their peers.

Delmar junior, Maci Bradford opened the scoring with an early goal just 2:26 into the game, giving the Wildcats a 1-0 first quarter lead. Newark Charter played well defensively in the opening 15 minutes, but Delmar exploded in the 2nd quarter scoring 4 goals to take a 5-0 lead into the half. Bradford got the “hat trick” with 2 goals in the 2nd stanza, the other two goals were put into the net by Josie Holloman and Lilly Waters.

It looked like the Patriots would hold Delmar scoreless in the 3rd quarter, but a goal with :21 to go by Jordyn Holloman extended the lead to 6-0 with the final 15 minutes left.

Josie Holloman netted an early 4th quarter goal at the 13:03 mark & less than four minutes later, Bradford closed out the scoring with her 4th goal of the game to make the final 8-0.

Delmar out-shot the Patriots 18-0 with Newark Charter freshman goalkeeper Riley Redding making 13 saves. The Wildcats ended up with an advantage in penalty corners of 22-1.

Newark Charter finished the season with a very respectable record of 15-3, appearing in the championship game for the 1st time in school history. The program began just 7 years ago when Coach Stacey Spiker sought permission to start up the sport in 2015.

Meanwhile, Delmar completed an unbeaten season at 19-0, outscoring their opponents by a phenomenal total of 162-4 (23-0 in the tournament). The Wildcats have not lost a game since October, 2016 to Cape, taking a 96-game winning streak into the 2022 season.