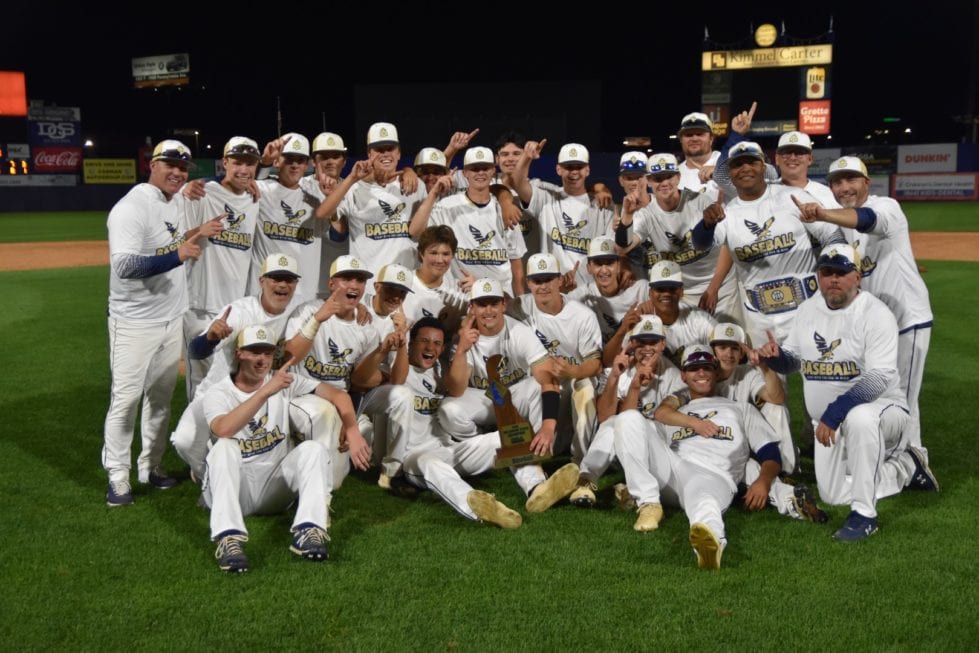 The Seahawks entered Monday’s game having never played in a baseball state championship and left with the school’s first state title. This all went down before a record-breaking crowd that saw over 2400 people in attendance, the most at Frawley Stadium since the championship game moved there in 1994.   The Seahawks hit up and down the lineup as they jumped on the Jaguars early, scoring 2 runs in the first. DMA shortstop and the University of Delaware commit Jackson Tyer got the inning started with a single. Tyer would then score on a single by Catcher Tyler August to take a 1-0 lead. DMA would add on in the first on a single by Zach Morris and then a double by Mason DeLuca to extend the lead to 2-0 after 1 inning of play.

The Jaguars would get on the board in the second. Appoquinimink catcher Austin Luszcz would lead off with a single, then exit for pinch-runner Dillon Peden. Peden would steal second then eventually come around and score on a 2 out throwing error, cutting the DMA lead to 2-1.

DMA would go on the offensive again in the 3rd inning, scoring 3 more runs, this time with the help of the Appo pitching stuff. Jaguars walked 5 batters (1 intentional) then gave up an infield single on a bunt by Zach Morris. Mason McCloskey would follow up with a sac fly to give DMA a 5-1 lead before Appo relieved starter Evan Bouldin. The Jaguars would again look to answer in the 4th as Austin Luszcz led off with a hit, this time a double. Peden would once again enter the game as a pinch-runner and scored on an RBI single from Preston Leinbach. But DMA would answer every run by the Jaguars. The Seahawks would go on to score 3 more runs in the 4th. Appo again struggled again defensively, with an error, walking two batters, then hitting two more batters. This allowed McCloskey to knock in another run and extend the lead to 8-2.

Appoquimink would load the bases in the 5th but were unable to get a runner across, then in the 6th inning, Appo would put together some hits. The Jaguars would score 3 runs with the help of two RBI singles from Preston Leionbach and Keegan Miller. This brought 3 runs across for the Jaguars and they cut into the lead 8-5 in the 6th. But once again DMA answers in the bottom half of the inning. The Seahawks would get a runner on with a walk and then leadoff hitter Jackson Tyer would bring him around on an RBI double, making the score 9-5. Appo would be unable to answer in the 7th and DMA closes the door with the help of reliever Drew Simpson, to bring home the school’s first-ever DIAA Baseball State Championship.

Second Team All State pitcher Kevin Williams came up big on the mound for the Seahawks as he went 92 pitches for DMA before allowing Simpson to pick up the win in relief. Tyer and DeLuca had extra-base hits for the Seahawks in the win.