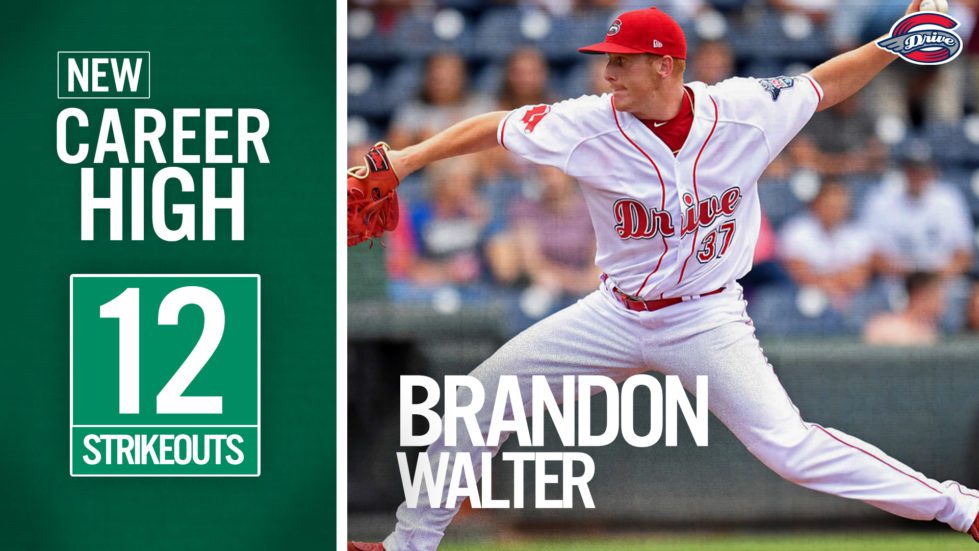 Brandon Walter, a 26th round selection of the Red Sox, was called up to Greenville following a dominant start to the year in Low-A Salem, in which he pitched to a 1.45 ERA in 13 appearances primarily out of relief.

Since the call up, Walter has been utilized strictly as a starting pitcher.  His first three outings, Walter combined for only 12 innings pitched, surrendering 19 hits, including 5 home runs.  He did strike out 21 batters over those 12 innings.

Walter has turned things around in his last two outings. He has had back to back stellar games while setting a career high in strikeouts in one of them. On Wednesday July 28th the 24-year-old left hander struck out a career high 12 batters while only allowing 1 hit in 6 innings of work for the Greenville Drive, a High-A affiliate of the Boston Red Sox.

Last night Walter followed up his career strikeout game with another great outing. Facing the Rome Braves he threw 6 innings allowing 5 hits, and 1 earned run while striking out 8. Brandon has notched two wins in a row bringing his record to 2-2.

The outings are a huge turn in the right direction for Walter, after allowing 12 earned runs in his first 3 appearances in Greenville. The bounce back games are a good sign for Walter, for former Blue Hen & Hodgson Vo-Tech pitcher as perhaps he has begun to settle into the High-A level.