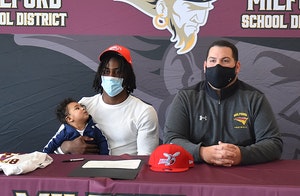 There are people that are simply born to play football, Milford senior Marquis Gillis is one of them. While many players in the game have the talent, it takes much more than talent to make it to the next level. It is even more difficult to earn a scholarship, especially in today’s environment. The NCAA issued a directive allowing all athletes an extra year of eligibility, thereby drastically narrowing down the number of scholarships available. Gillis however demonstrated enough prowess on the field to get offered and accept a full-ride scholarship to Delaware State University, signing with the local school this past Wednesday in front of a small gathering of family and friends.

During his career with the Buccaneers, it was thrilling to watch Gillis develop into the player he has become. Playing on both sides of the ball Gillis was the center of the offense as well as a star on defense. Postseason awards bear out those statements with Gillis being selected second-team Henlopen Conference at running back. On the defensive side, Gillis was selected first team at defensive back both in the Henlopen Conference and All State. Gillis was also named the Maxwell Award recipient for Milford as well as the team’s MVP. Gillis will also represent Milford as its Blue-Gold selection.

Gillis posted impressive numbers at Milford with over 2,000 yards rushing and 20 touchdowns. He also recorded three defensive/special teams touchdowns during his career. Gillis also recorded three interceptions and over 100 tackles on the defensive side of the ball. “It was such a pleasure to coach Marquis during his time here at Milford. He was the type of player every coach dreams about, I never had to worry about him putting in the effort,” Coach Shaun Strickland said. “Every game, every practice he left it all on the field, he was a natural leader as well.”

While there were other options available for Gillis, it was DSU that pursued him from the start and stayed with him in this uncertain recruiting environment. “They showed interest in me early on and never wavered, that meant a lot to me. I really felt comfortable with the coaching staff and the fact that DJ [Milford graduate David Bowman] was there also played a factor in it. The fact that he likes it there was important to me,” Gillis said.

In over 10 years of covering Milford football, Gillis was one of, if not the toughest player that I have ever seen. His ability to withstand punishment and play through pain, was truly impressive. It is more than that which makes Gillis special, it is his love for family and life that makes him unique. Sitting there on signing day, with his family and his son Gianni on his lap it was easy to see that the future is bright for him. When asked about his family, Gillis replied. “My mom and pop-pop have always been there for me. Every time I needed inspiration, they were always there to support me, I honestly can’t thank them enough for all they did for me.”

Following his time at DSU, Gillis plans on becoming a podiatrist.