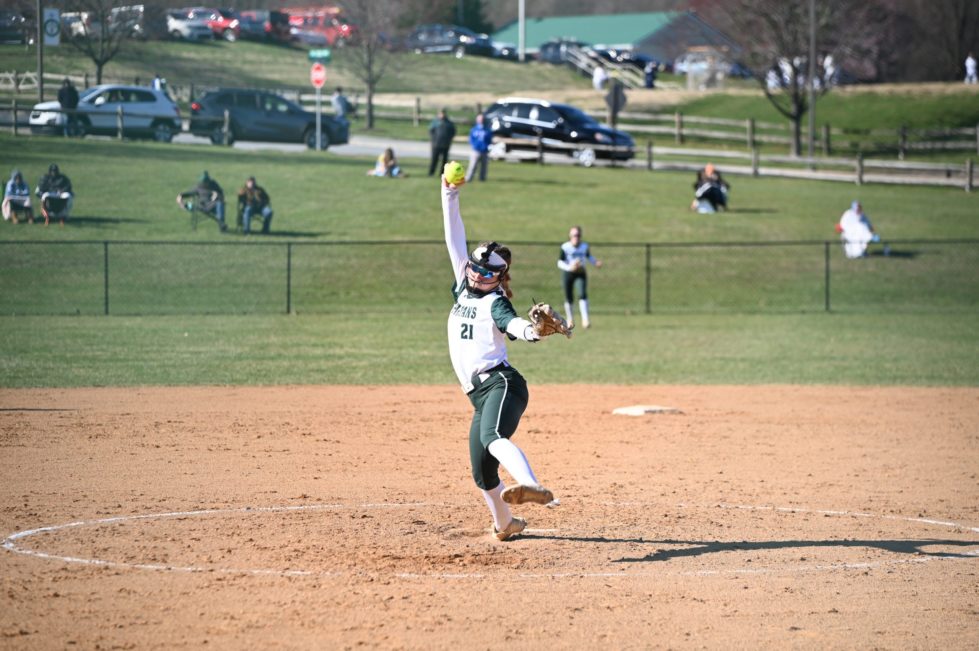 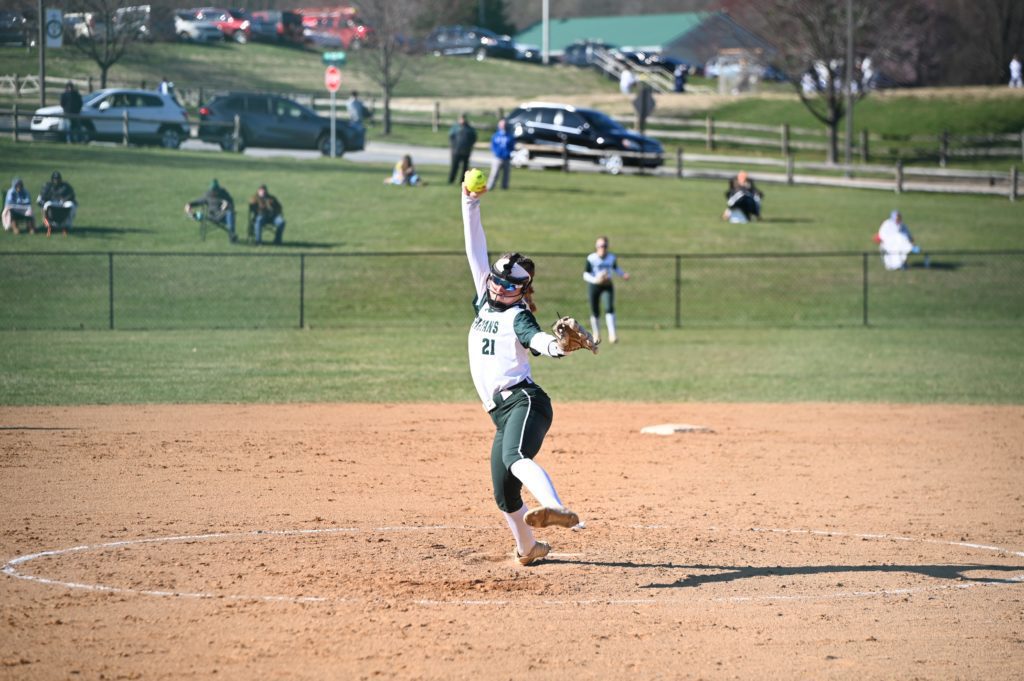 Ryleigh Thomas Saint Mark’s recorded a no-hitter, striking out 17 for the win photo by Nick Halliday

Top ranked Caravel improved to 5-0 with an impressive 11-3 road win at #10 Smyrna Tuesday. The Bucs had 14 hits in the game including 2 home runs from Brooke Holdsworth, accounting for her 5 runs batted in. Mikayla Walsh and Haley Grygo also went yard for Caravel. Meghan Shirey homered for the Eagles. Brooklyn Richardson held Smyrna through 4 innings, to 2 runs on 4 hits to pick up the win. The Eagles fall to 4-2 and will face Indian River Thursday.

No. 2 Sussex Central winners of 5 straight, faces (2-2) Delmar Thursday after having a postponement against Laurel last week. The Wildcats have won two straight over Laurel and Newark Charter.

No. 3 Appo is on a roll at 7-0 on the season including a 5-1 victory against conference rival William Penn on Tuesday. The Jags received another stellar performance from pitcher Savannah Laird as she struck out 16 and allowed just one hit (a 1st inning homer to Madison Perry). Offensively, Appo was led by Hailey Watlington with 2 hits and 3 RBI’s and Julia Weglarz with 2 hits and 2 runs scored. The Jags host Delmarva Christian Thursday in a key Top 10 match up.

No. 4 Delmarva Christian lost to Stephen Decatur (MD) 4-2 on Monday before bouncing back with a close 2-1 win over Indian River. Lily Hutt led the Royals going 2/3 at the plate against the Indians. Kinsley Hall suffered a tough loss in the circle for IR as she recorded 14 K’s while getting 2 hits at the “dish”.

5th ranked DMA improved to 4-1 with a 9-1 win Tuesday against Conrad. Emily Trzonkowski tossed a 2-hitter and struck out 4 for the win. Lexi Delcollo led the Seahawks with 3 hits, 3 RBI’s and 2 runs. Marisa Edevane and Lindsey Henn also had multiple-hit efforts for DMA. The ‘Hawks travel to Smyrna for a top-10 game Saturday at noon.

No. 6 Laurel fell to unbeaten Caesar Rodney Tuesday 2-1. It’s the 2nd straight defeat for the Bulldogs as they are now 2-3 on the season. Alyssa Brittingham doubled and scored the lone run for Laurel. The Riders were led by pitcher Peyton Shields with 7 strikeouts. Stacy Deputy tripled to knock in the winning run in the bottom of the 8th. The Riders tied the game in the 6th inning on an RBI hit by Kaitlyn Horton. CR will face Seaford Thursday then meet #9 Middletown next Tuesday at home.

No. 7 RLCA came from 3 runs down to get a 7-3 victory over Milford on Monday. The Lady Lions scored all their runs over the final 3 innings as Alayna Griffing homered, and Kimorah Neal tripled. Morgan Lieske went 3/4 with 2 runs batted in, while Peyton Pusey and Angelina Edwards had 2 hits each. The Lions take a 5-1 record into Wednesday night’s game against St. Marks.

No. 8 St. Marks improved to 6-1 with a 4-0 win versus Archmere. Ryleigh Thomas recorded a no-hitter, striking out 17 for the win. The game was scoreless until the Spartans plated 4 runs in the bottom of the 6th. Archmere’s Tory Connor held the Spartans without a hit until the 4th inning. St. Mark’s travels to No. 7 RLCA Wednesday night for a game that will be broadcast by Delaware Live.

Finally, 9th ranked Middletown won its 6th game in a row by knocking off Mount Pleasant 13-0 on Tuesday. Reese Founds pitched a “perfect” game with 13 K’s to get the win. Summer Montgomery, Jacquelyn Hackett, Becca Maiorano and Kaylee Stenvik all recorded multiple hits for the Cavaliers. Middletown will have a week off before traveling to unbeaten Caesar Rodney next Tuesday.

In other games of note…Charter of Wilmington broke open a close game in the 4th inning Tuesday and eased to a 14-4 win at home against Archmere. The game was 2-1 through the 3rd, when the Force batted around, scoring 6 times on 3 hits, 2 walks and an error. Kate Hoban went 4 innings to get the win. Cecilia Johnston collected 3 hits, while Natalie Nycz and Sophia Johnston homered for the Force. The Auks were led by Ryan Vitola with 3 hits and a walk. Vitola also doubled off a runner from center field in the 1st inning. Delmar scored in the top of the 7th to gain a 3-2 win over Newark Charter. The Wildcats have won 2 straight.

That’s it for this edition of “Inside The Circle”