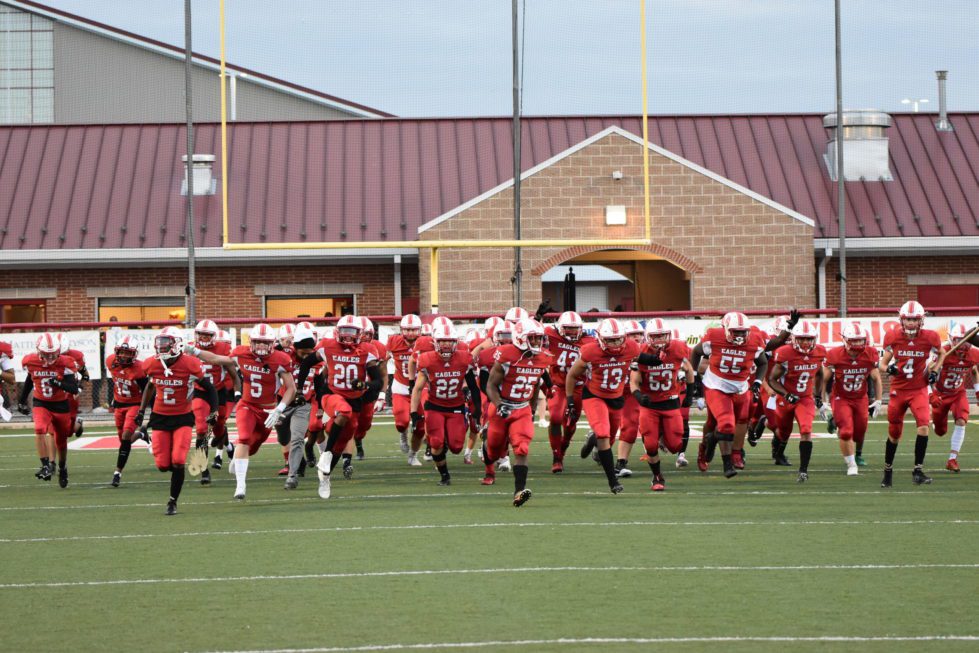 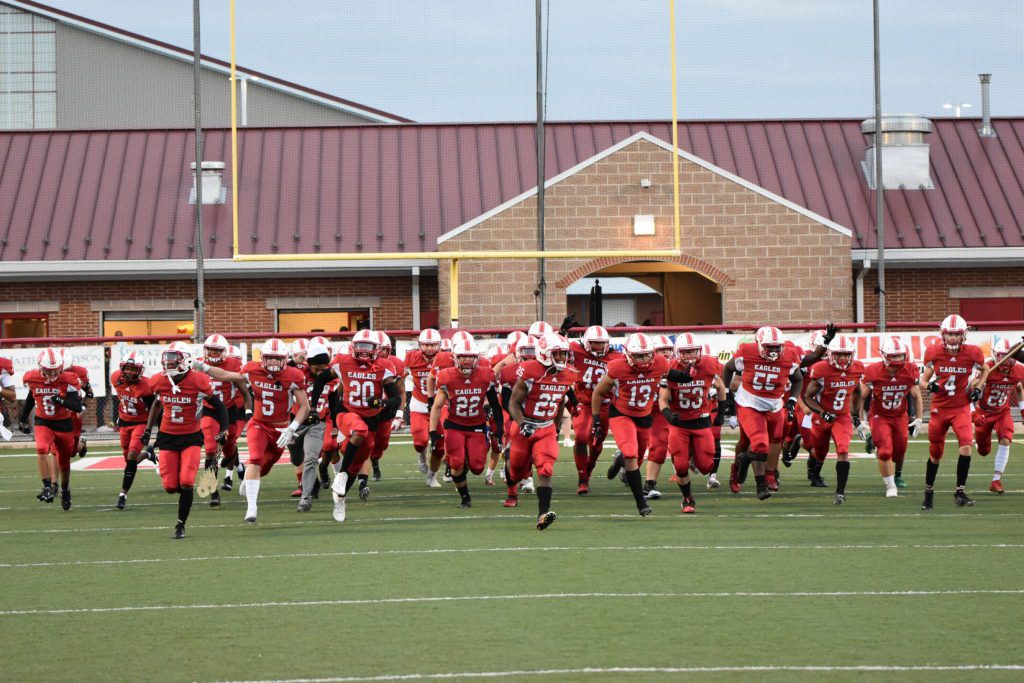 Wayne Knight scored four touchdowns and was crowned homecoming king as Smyrna clinched the inaugural class AAA – district 2 title with a 34-13 win over Dover Friday night. The Eagles are 3-0 in district play (5-2 overall) with one district game remaining against Cape Henlopen November 12th.

Smyrna unveiled its brand new inflatable Eagle during pregame before a capacity crowd. The Eagles scored first after a 41-yard pass from Cameron Edge to Devin Demoe put them in business inside the Dover ten. Edge found Wayne Knight open on a “middle” screen for 5 yards and a 6-0 lead. The next time Smyrna took possession, they scored on a Knight 9-yard run and increased the lead to 12-0 at the end of one quarter.

Knight finished the 1st half scoring with a “jump-cut” and sideline scamper for 35 yards as the Eagles took a 20-0 advantage into the locker room. Dover was held to 95 total yards in the half by a stingy Eagle defense. Meanwhile, Smyrna gained 211 yards, 91 on the ground and 120 through the air.

Dover made halftime adjustments and methodically marched downfield 68 yards in 12 plays to start the 3rd quarter. The drive took 6:21 off the clock as Ja’Kwon Kilby ran down the sideline for a 10-yard touchdown to cut the lead to 20-7. Both defenses stiffened as Dover held Edge to one completed pass in five attempts into the 4th quarter. With 8:20 left in the game, the Eagles decided to go to the run-oriented “earthquake” formation deep in their own end of the field. When Wayne Knight attempted a jump pass, it was picked off by Ethan Roth and returned 20 yards for a touchdown that closed the gap to 20-13 and a one score game.

Smyrna answered barely two minutes later when Edge found Demoe for a 30-yard pass. The 2-point conversion gave the Eagles a 28-13 lead with 6:05 left. Smyrna’s defense forced a turnover on downs and Wayne Knight finished the scoring with a 40-yard touchdown run to make the final 34-13.

Knight carried the ball 16 times for 161 yards and 3 TD’s plus he had two pass receptions for 16 yards and a 4th score. Edge was held below his season average completing just 13 of 23 pass attempts for 154 yards and 2 scores and his 2nd interception of the season. Demoe caught 5 of those passes for 79 yards and a touchdown.

The Senators were led by Kilby with 105 yards on 24 carries and the lone offensive TD. Jordan Moran completed 14 of 33 passes for 131 yards and an interception. Freshman John Parker had 8 receptions for 72 yards and UD commit Elijah Sessoms caught 4 passes for 44 yards. Ethan Roth recovered a fumble and added the 20-yard “pick-6” interception.

Dover completes district 2 play with a 3-1 record (5-3 overall) and will host William Penn on the 29th. Smyrna improves to 5-2 (3-0 in District 2) and travels to Wilmington next Friday to face Salesianum.