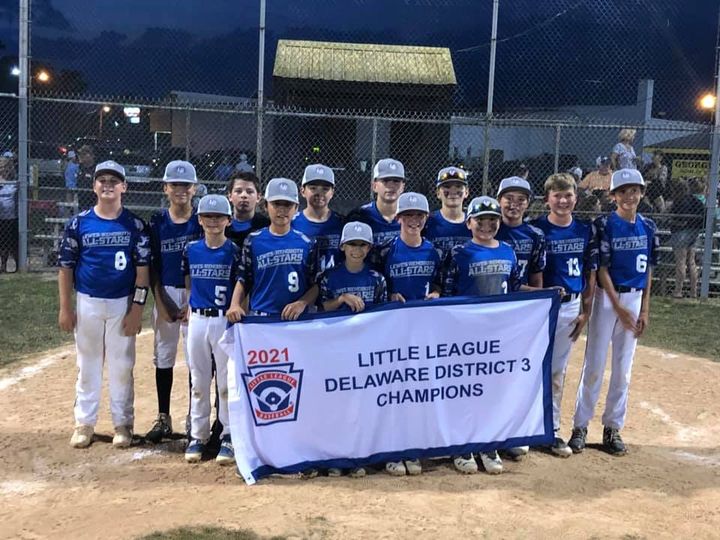 After dominating their first three opponents by a combined score of 32-3, the Lewes/Rehoboth All Stars found themselves with their backs against the wall in what is referred to as the “If game,” the winner take all tournament final.

They faced off against the Milton All Stars on Thursday, July 22, at the Georgetown Little League Park.

Lewes/Rehoboth scored four runs in the bottom of the first and never looked back, winning the District III Major League championship 5-2 over Milton.

It was their first district title as a merged league and the first since Lewes won the district championship in 2012.

“This is a really talented team and I have told them since day one we have the talent to win this All Star tournament,” said Lewes/Rehoboth manager Greg James.

Milton forced the final game with an 11-2 win on Wednesday. Milton had won four District III titles in the past six years including three state championships.

Milton jumped on Lewes/Rehoboth starting pitcher Ben Tollett as the first three Milton batters Taz Willey, Liam Mitchell and Aaden Johnson reached on base hits. Willey scored on Johnson’s RBI single. Tollett then switched up throwing more off speed pitches and followed up with three straight strikeouts to end the inning only giving up the lone run.

“I felt good with the fastball early and they were hitting it so I started to change it up,” Tollett said. Tollett earned the win on the mound throwing a five hitter with seven strikeouts and two walks. He helped his own cause with a two RBI single in the top of the first.

Lewes/Rehoboth answered in the bottom half of the inning scoring four runs on four hits to take a 4-1 lead after one inning. Nick Clampitt, Tollett, Ethan James all had base hits while Lukin Jones doubled in a pair of runs.

Johnson came in relief on the mound of Mitchell for Milton and was met with a leadoff single by Chris Friscia who later scored on Jack Simeone’s RBI double. That would end the Lewes/Rehoboth scoring as Johnson settled in and finished the game allowing one run, four hits, six strikeouts and two walks. Johnson also led Milton at the plate going 2 for 3.

Milton added a run in the fourth inning when Trey Dickinson led off with a single and later scored on a throwing error.

Lewes/Rehoboth advances to the state tournament where they will play District II champion (New Castle County) Canal Little League on Wednesday, July 28 at the Camden-Wyoming Little League Park. First pitch is scheduled for 7:00 pm. Camden-Wyoming will represent District I (Kent County) in the state tournament and will play the winner of Lewes/Rehoboth and Canal on Thursday, July 29.

“We’re going to enjoy this one, but we have a really talented team we’re going to see how far we can go, we aren’t done yet,” James said.

Jack Simeone – 2 for 2 double and RBI