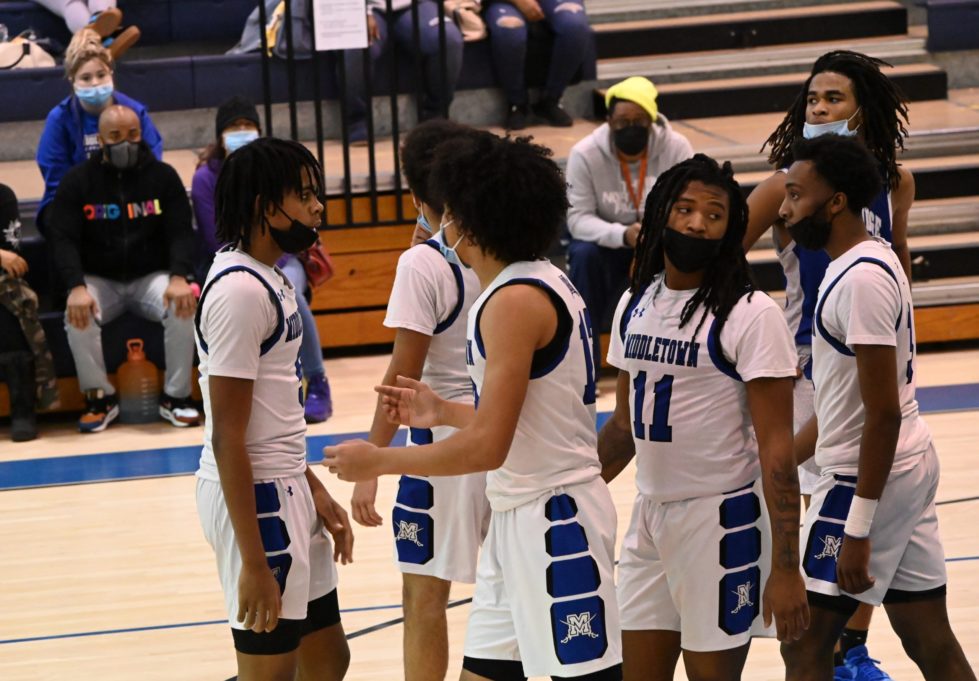 The DIAA State Indoor Track Meet is scheduled for next Saturday (19th), but Friday night in Middletown, the 9th ranked Cavaliers and Woodbridge provided their own brand of “a track sprinting event” in boys basketball. The two teams raced up and down the court playing the 1st half in barely 30 minutes of real time and went into the locker room separated by a single point at 28-27 in favor of the Cavs.

Ultimately, the depth of Middletown was too much for the Blue Raiders starting five, as the Cavaliers out-scored Woodbridge 44-29 in the second half for a 72-56 win.

The first two quarters were very entertaining as neither team led by more than 6 points. Freshman Isaiah Giles banked a 3-pointer from the left corner at the buzzer to cut the Cavs advantage to 28-27 at the break. It would be his only basket of the game as most of the Blue Raiders offense this season funnels through the other four starters. Emmanuel McRea-Mosely, Kenny Newtown, Bruce Mosely and Ci-Atrick Stones are those four starters, and along with Giles, predominantly play the entire game for head coach Julius Cannon. They are “fearless”, constantly attacking the rim while using their quickness to force turnovers.

Middletown head coach Azeez Ali, countered with the depth of his team – staying fresh and matching the intensity of the visiting Blue Raiders.

Woodbridge started fast to open the 3rd quarter, scoring four straight points on baskets by Newton and Bruce Mosely to grab their first lead of the night at 31-28. Undaunted, the Cavs regained the lead as Christion Simms drained a long-range jumper and Ty Hynson made a bucket for a 33-31 turnaround. The two battled neck-and-neck for the next two minutes until Middletown went on an 8-0 run to push the lead to 44-35.

That spurt, plus foul trouble proved to be the difference, as the visiting team would get no closer than 7 points in the 4th quarter. Two starters fouled out (Stones and McRea-Mosely) as the Cavaliers built a double-digit lead early in the final quarter and “coasted” from there.

Middletown’s balanced attack was led by Hynson with 21 points and 6 rebounds. Jaden Rogers added 12 points – 6 boards – 5 assists, while Simms made three 3’s and ended with 11 points. The Cavaliers improved to 11-5 and will host Mount Pleasant next Tuesday.