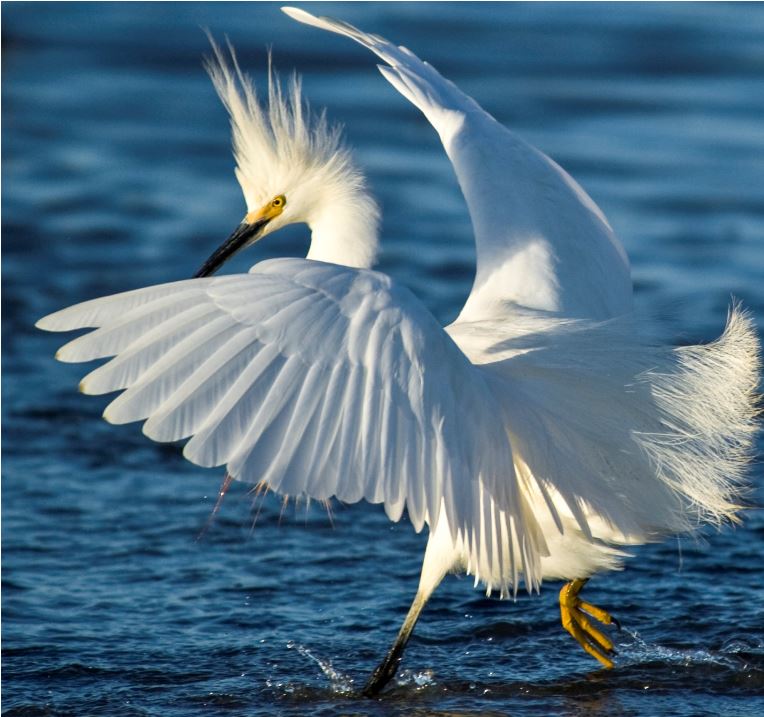 The Pew Charitable Trusts study included photos of wildlife in wetlands, such as this snowy egret.

But they are also under pressure from coastal development and increasingly strong storms, the study says, and should be protected.

The report did not estimate the overall economic impact that the area’s natural resources generate, but said Pew used “ecosystem service valuation that estimates the intrinsic and nonmarket value people place on nature.”

Those things are not always measured in typical economic indicators such as spending or revenue, but should be, the study by Joseph Gordon and Caitlin Lang said.

The watersheds are directly or indirectly responsible for 1,251 jobs in the region, across 83 businesses dominated by restaurants, bars, hotels, campgrounds, a zoo and an aquarium, but also include other marine- and coast-dependent industries, such as shipping and warehousing.

It cited examples among tourism.

The Delaware Nature Society’s recreation- and tourist-centered Abbott’s Mill Nature Center—which offers hiking, wildlife viewing, and family-centered activities—is valued at between $313,000 and $6.3 million. Leisure activities at Mispillion Riverwalk Greenway have values of $465,000 to $1.19 million. These ranges are so wide because recreational activities may have vastly different ecosystem service benefits associated with them.

The Marvel Saltmarsh Preserve Boardwalk, popular for shorebird viewing, was valued at $428,000, but the study said that’s likely low because it was measured during the COVID-19 pandemic. The study also said the Mispillion Harbor Reserve, DuPont Nature Center and Slaughter Beach, which support wildlife, shorebird and horseshoe crab viewing, and bay beach recreation would top $1 million combined.

The study estimated values of $574,000 to $1.15 million from day trips and overnight stays for shorebird viewing, and $458,000 for Slaughter Beach recreational activities.

In addition, it said, Slaughter Beach’s and Milford’s salt marshes and wetlands provide storm protection valued at between $7,800 and $125,200 per extreme weather event, according to an examination of flood insurance records.

Dan Bond, part of a group that wants to buy the Vinyard Shipyard, which sits on the Mispillion River in Milford, and continue its historic and education mission, says a report like this will be invaluable while the group tries to raise money to take the site public.

Ideally, he said, Vinyard would become part of Milford’s parks, but the city has been reluctant to take on such a large project.

Owners Joan and Sudler Lofland are willing to sell for about $2 million, but plan to return some of that as an endowment, Bond said.

Already, $800,000 was set aside in this year’s Community Redevelopment Funds, which are projects picked by legislators for their areas, to be given to Downtown Milford Inc., an umbrella organizaton for the Vinyard Shipyard Task Force, for the acquisition and renovation of the shipyard.

The Vinyard is specifically named in the Pew study as one of the sites that benefit from the interest in natural resources and so contribute to the watersheds’ value.

The Pew study says a broad coalition is working to establish a nature-based investment strategy to increase economic opportunity while simultaneously conserving coastal habitats and boosting the communities’ resilience to sea level rise.

The study was released Wednesday by the Environmental Finance Center at the University of Maryland. It was funded by the Waterways Infrastructure and Investment Network, which focuses on the Mispillion and Cedar Creek areas, and is an offshoot of the Delaware Resilient and Sustainable Communities League, a consortium of 22 organizations helping Delaware communities improve how they respond to changing environmental conditions.

“This project helps communicate the benefits nature provides to the economies and people living in and visiting the communities profiled,” EFC wrote. “The values help support broader statewide planning to implement, invest in, and enhance nature-based solutions and ecotourism opportunities in the city of Milford and town of Slaughter Beach, their respective counties of Kent and Sussex, and potentially other Bayshore towns.”

Other entities involved with the work included the Delaware Department of Natural Resources and Environmental Control, the Delaware Nature Society, Delaware Sea Grant, Kent County, Milford, the Partnership for the Delaware Estuary, Slaughter Beach, Sussex County and the finance center.

Pew plans to continue the study, focusing next on land-use decisions.

The study said that at 60 feet, Delaware has the lowest mean elevation of any U.S. state, so areas within it experience a rate of sea level rise twice the international average, according to Delaware Sea Grant.

Researchers plan to identify community assets and natural resources at risk of flooding, sea level rise and changes in land use. This phase will be funded largely by a competitive grant recently awarded to the coalition by the National Fish and Wildlife Foundation’s National Coastal Resilience Fund.

Researchers said they wouldn’t attempt to establish the precise value that a healthy coastline provides to the area but noted, “The monetary value of storm protection by marshes and barrier beaches is increasingly urgent to quantify. Notably, the increasing intensity of storms will make this protective value essential in planning future land use.”

Healthy salt marsh beds and wetlands generally reduce the cost of damage that communities sustain from weather events by about 10%, the study said.