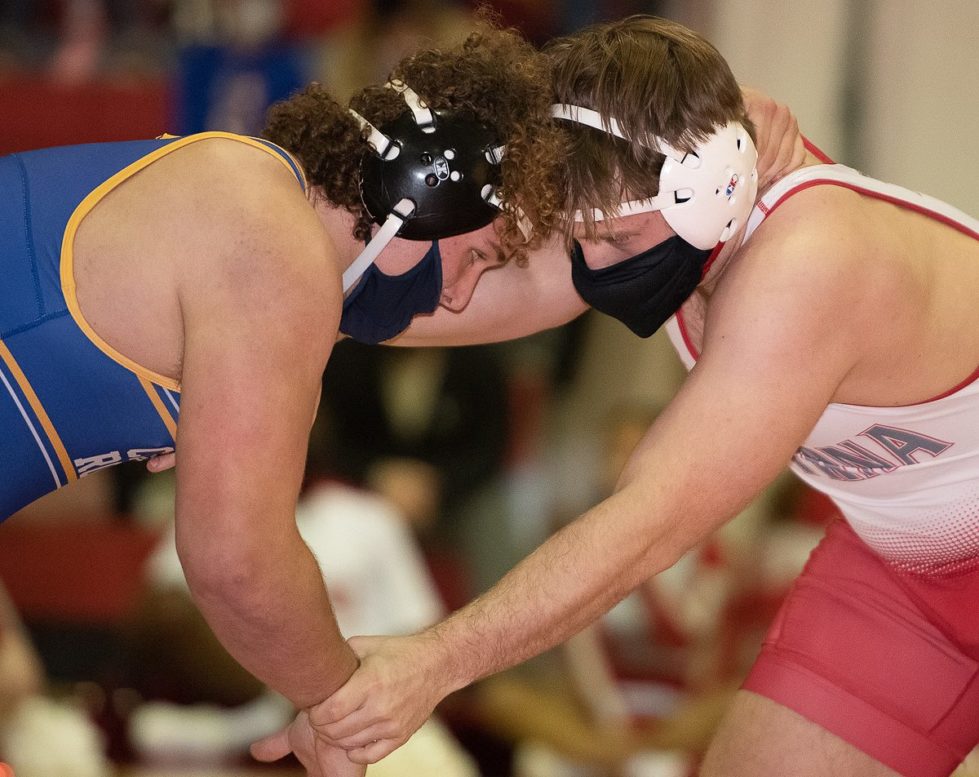 Smyrna – The last time the Caesar Rodney Riders wrestling team beat the Smyrna Eagles was the 2018 state championship. On Wednesday night the Riders ended a four match losing streak with a 34-23 victory over their rival.

“It was really about who showed up and who didn’t show up. A lot of things went our way tonight and if we see them again in state duals it could go their way. That’s the way the Smyrna-CR rivalry goes,” Caesar Rodney head coach Dan Rigby said.

Conner had a key pin at 170 pounds that helped spark the Riders in the upper weights were they won four of five bouts.

“I don’t even know what to say, I am just excited. I don’t remember beating them in anything since I have been in high school,” senior Brock Conner said.

The two rivals battled trading bouts back and forth to start the dual. Smyrna’s Quantez Watkins won a 15-6 major decision over Dylan Bennett at 126 pounds to start the match.

At 132 pounds the Riders M’Ja Smith answered with an 8-0 major decision over Jake Wagner to tie the dual at 4-4.

The back and forth pattern continued into 152 pounds as the Eagles Garrett Hudson won an 8-4 decision over Mason Bush, but the Riders answered as D.J. Baker won a 16-9 decision over Brandon West at 160 pounds as Caesar Rodney led 11-10.

Conner gave the Riders back to back wins for the first time of the night as he recorded a pin in 2:00 over Shaun Atkinson at 170 pounds.

Derek Davis got Smyrna back in the win column with a 6-3 decision over Owen Dixon at 182 pounds.

Caesar Rodney then reeled off four straight wins starting with Shamar Nelson who recorded a pin in 4:17 over Tyler Downward at 195 pounds.

“I just believed in my training, my coaches and my teammates said a prayer before I went out there and did what I do best,” Nelson said.

At 220 Josh Dyer grinded out a 3-1 decision over Kael Howell.

In the most exciting bout of the night the Riders Bobby Meister and Smyrna’s Chi Chi Eule brought the crowd to the edge of their seats with Meister edging out a 3-2 decision.

The wins in the upper weights came up big for Caesar Rodney since in the past few matches the Riders have suffered several upsets.

“Like they say in baseball when your hitters are in a slump you keep putting them up to the plate and they keep swinging,” Rigby said.

Caesar Rodney’s Alex McEvoy sealed the victory as he recorded a pin over Warren Coates in 4:46 giving the Riders an insurmountable 35-13 lead with just two bouts left.

Wyatt Miller won a 10-1 major decision over Cole Moffett at 113 pounds and Gabe Giapietro received a forfeit as Smyrna closed the final score to 34-23.

The Riders improve to 7-5 overall and 6-1 in the Henlopen North.

“With the parity in Division I this year it is going to come down to which team has that edge going into state duals is probably going to come out on top,” Rigby said.

Smyrna drops to 6-2 overall and 5-2 in the Henlopen North.

Smyrna’s Brandon West (top) attempts to turn Caesar Rodney’s D.J. Baker with a power half in their 160 pound bout on Wednesday night. Baker won a 16-9 decision photo by Gene Shaner