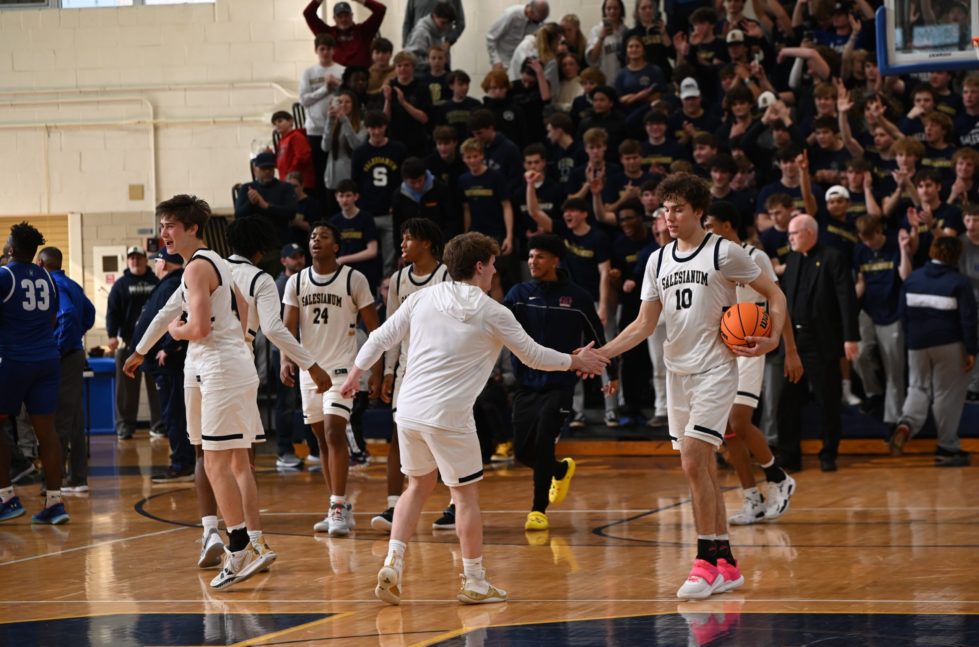 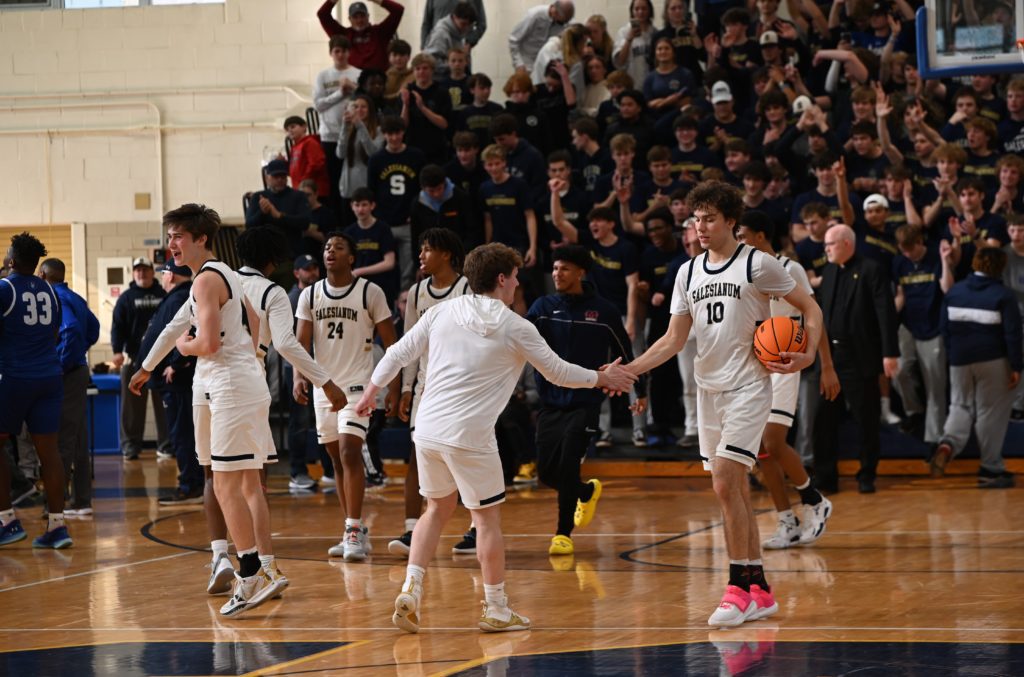 It was a shame that this matchup had to take place so early in the DIAA Boys’ Basketball State Tournament.  These two programs were in Delaware Live’s top 10 all year and were in the top 5 most of the year.  Dover came into this game as perhaps the best 9-seed ever because of the weighted point system used to determine seeding.  One could say they were unfairly seeded because they are forced to play against each Henlopen North team twice during the season, but that’s another topic for another day.  This quarterfinal game lived up to the hype and then some!

It was a slow start at Birkenheuer Memorial Gymnasium, as Sallies led 9-6 after one quarter of play.  However, the game picked up in the second quarter.  The Sals & Senators would combine for 39 points in the second frame.  Dover led the game 25-22 with 55 seconds left in the half, and that’s when the first turning point of the game took place.  Salesianum would burst into the lead with 7 points before the halftime buzzer, capped off by Isaiah Hynson’s deep three as time expired.

The run would continue in the third quarter as Dover would not score until the 4:07 mark.  The Sals run would end up a 14-0 spirit that covered a little over 7 minutes, as they led 36-25.

This was turning point number two of the game, as Dover would end the scoreless drought with a Tyrone Tolson wing-3.  This is when the fun of this game really began.  He & his fellow sophomore star Jaheim Harrell would get hot from deep.  They would each have a pair of threes to close out the quarter to pull the Senators within 7 points after three quarters, 44-37.  At this time, the atmosphere in the gym was electric.  Salesianum’s student section & the Senator faithful who made their way up to Wilmington from the State Capital, were going back and forth with chants & friendly banter.

Duece Mutts would score the first four for Sallies in the 4th, but Tolson would once again hit a huge three-pointer to pull Dover within four-points with under 5 minutes to play.  Sallies would hold a 5-point lead until the final minute.

Amir Hite would hit a huge step-back three with under a minute left to play to pull Dover within two, 49-47.  The Sals would use some clock, and hustle down a missed Justin Molen three to save possession and call a timeout with 29 seconds left.  Out of the timeout, Molen would dribble to mid-court and have the ball knocked away by Lance Rainford, who would chase down the loose ball & tie the game at 49 with the fast-break layup.  The gym was rattling at this point due to all the excitement from Dover’s fans.

Sam Walsh would get a clean look from three, but couldn’t connect & the game would go into overtime.  As I said, this game was a true gem.

Lance Rainford would come up with another great play, as he opened the scoring in the extra frame with a put-back layup.  This was the last of positives for the Senators offensively, as turnovers on three consecutive possessions would seal their fate.  Sallies would convert a fast break layup to tie the game.

The final momentum swing happened with 1:20 in overtime when Tolson had a three roll in & out, and the Sals would convert a second-chance opportunity.  Dariyon Williams would rip down an offensive rebound and Justin Molen would take a pass and dribble into a corner-three, nothing but net with 41 seconds left.

This moment was not without controversy, however.  It appeared as though Williams double-dribbled prior to passing to Molen, however whistles were silent.

The Sals would lock in on the next defensive possession, and the Senators were not able to get the ball in either Tolson or Harrell’s hands and would settle for a Rainford step-back three with only 9 seconds left.

This game still had one more fascinating sequence left in it.  Molen grabbed the rebound off the Rainford miss and was fouled to stop the clock.  He would make his first foul shot, to push this game to a two-possession game with only 7 seconds left.  However, he would miss the second shot and Salesianum would foul Rainford on the rebound!

We would walk the floor for free throws.  Dover had a chance to pull within two-points and set their defense up to potentially get a steal & bucket for the tie.  Many of the Senators fans were exiting the building during this sequence.

Unfortunately, Rainford couldn’t convert on the free throws, and we didn’t get the crazy finish potentially available.  Williams would sink two free-throws to the chorus of “happy birthday” being sung to him by his student section.  This brought us to the final, 57-51 Salesianum in overtime.

The Sals go back to the Bob Carpenter Center to take on the Howard Wildcats Thursday, time to be determined.