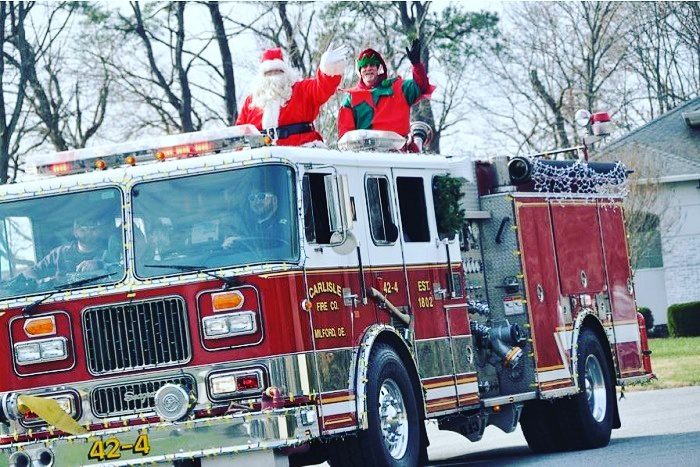 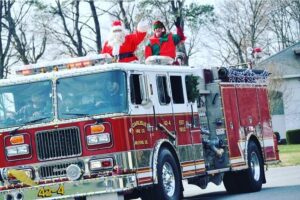 Thanks to the efforts of Carlisle Fire Company, Santa will once again make his rounds through the Milford area. After receiving Santa’s travel plans, the fire company announced that the jolly old elf will again climb aboard one of the company engines and travel around, much to the excitement of children in the area.

“Santa has checked his travel plans for the Carlisle Fire Company Santa Run on December 4th for Kent County and December 11th for Sussex County,” the fire company’s Facebook post read. “Yes, two separate runs on the 11th, even Santa needs help! If your location or neighborhood is not listed, we should be there around the time frame closest to your area. Remember to listen for the sirens! We cannot wait to see everyone!”

On December 4, will travel throughout the Kent County section of the city, starting at North Shore Drive at noon. By 1:15, he is expected to be at Knott’s Landing and by 2:30, arrive at Woods Haven. He will return to North Street, Church Street and other areas in the northern downtown area around 3 PM. He does plan to be in the Walmart parking lot around 12:50 PM and the Riverwalk Shopping Center around 4 PM. He will end his tour at around 4:45 PM in the Milford Plaza Shopping Center.

Using some of his magic, Santa will make two tours on December 11 when he visits the southern area of the city. He will begin one of the tours at noon in the Montgomery and Franklin Street areas before heading to Shawnee Acres and arriving at the Meadows of Shawnee around 1:30 PM. He will then head to Hidden Meadows, Mattlind Estates and West Shores, arriving there around 2:45 PM. He will end near Brady Lane around 4:45 PM.

The other area covered on December 11 will begin at noon on King’s Highway, traveling to Old Shawnee Road, Woodside Drive, and Bowman Terrace. Around 1:45 PM, he will be on Seabury Avenue, Cherry and New Street before heading to Lakeview Avenue. Around 3:15 PM, he will arrive on Causey Avenue before heading to Elks Lodge Road, Orchard Hill, Eastman Heights and down into Lincoln. He will end his tour at Mispillion Apartments and Walnut Crossing around 4:30 PM.

“Santa’s arrival will be slightly early or late due to travel routes,” the fire company explained. “Please have patience with us. Please do not approach the fire trucks as they cannot stop. Our goal is to keep you safe.”

The entire itinerary for Santa can be found on the Carlisle Fire Company Facebook page.