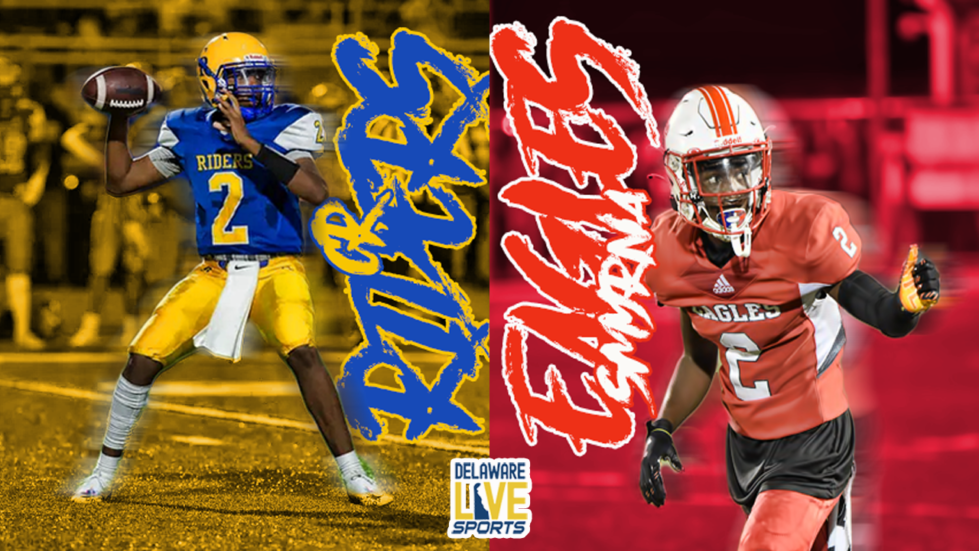 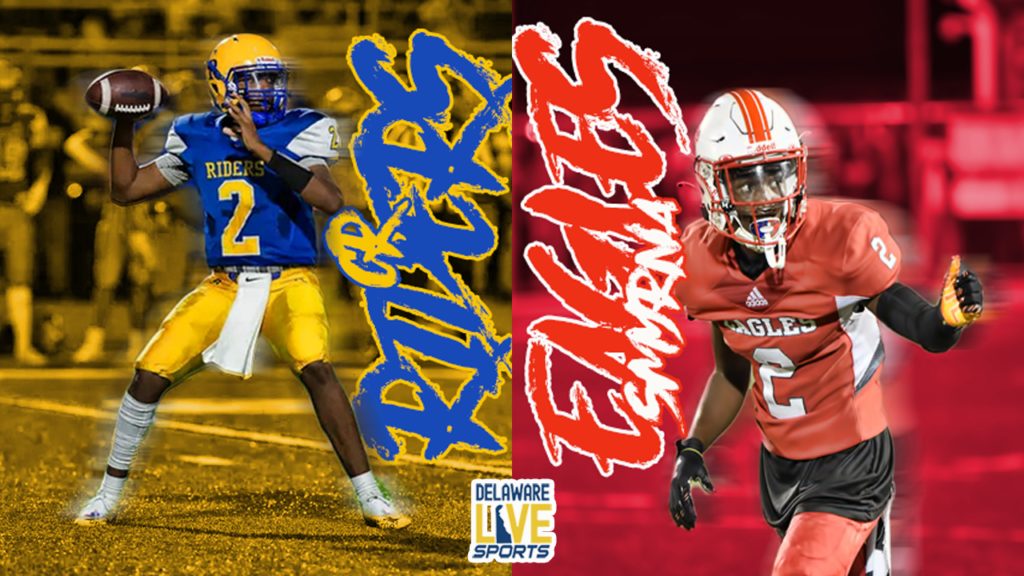 The Smyrna Eagles rebounded from a loss to Middletown in the Harvest Bowl last week with a second quarter explosion in a 40-0 win Thursday night against Caesar Rodney.

The “big play” ability of the Eagles was on full display as they recorded scoring plays of 24, 50, 51 and 63 yards in their 8th consecutive victory over the Riders. The last time Caesar Rodney won in this series was 2013.

Smyrna scored on its first possession of the night, just :50 seconds into the game on a 24-yard touchdown pass from Cameron Edge to Devin Demoe. Both defenses controlled the remainder of the opening quarter and it was 8-0 in favor of the Eagles going into the 2nd stanza.

That’s when Smyrna exploded for 24 points. The first score came on a one-yard run by Edge. Six minutes later, Edge found Wayne Knight open in the middle of the field for a 50 yard touchdown. The Eagle defense pressured Rider quarterback Andrea Moore as sophomore linebacker Cole Moyer sacked him for a loss, forcing a punt. It took Smyrna just one play to get back in the endzone when Edge connected with Yamir Knight in the flat. Knight faked out two defenders and Devin Smith made a nice downfield block to spring Knight for a 63 yard play with just 1:15 left in the half.

The Eagles had trouble running the ball in the first half as the Riders held them to minus 15 yards, but Smyrna would remedy that in the third quarter. Following a CR punt by Kyle Pounds pinning the Eagles back at their 9 yard line, Wayne Knight rushed for 18 yards on two consecutive carries and completed the drive on a 51 yard run. Knight was held to zero yards on 6 attempts in the first half, but gained 87 yards on his 3 carries in the third quarter. That score and the subsequent conversion run put Smyrna ahead 40-0 to start a “running clock” the rest of the game. Both teams rested several starters in the 4th quarter.

Caesar Rodney gained 133 total yards – all rushing. Smyrna’s Moyer recorded 2 sacks and intercepted a pass as his teammates swarmed to the ball the entire game.

Edge connected on 10 of his 14 passes for 277 yards and three touchdowns plus he scored on a one yard run. Wayne Knight rushed for 87 yards, scoring two touchdowns and made all 5 conversion attempts. He scored 22 of the Eagles 40 points.

Smyrna won its first game in the new Class AAA – District 2 conference and improved to 2-2. The Eagles will take to the road next week for a meeting with a very good Sussex Central team. The Riders fall to 0-1 in District 2 and 0-4 overall. They host rival Dover next in the “Civil War” game Saturday, October 2nd.