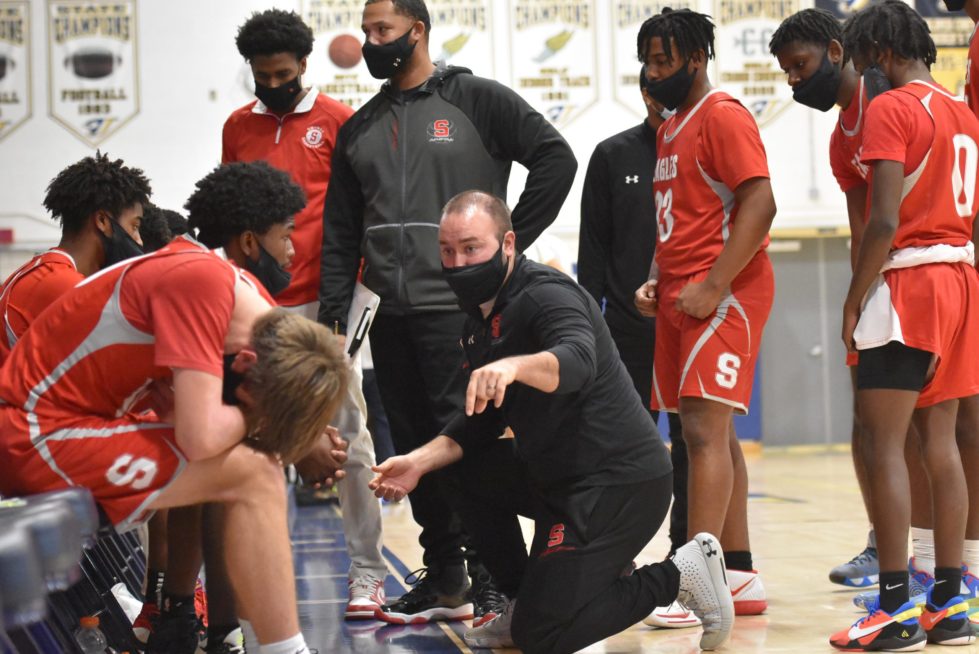 The Smyrna Eagles out-scored St. George’s 43-25 in the second half to win their opening round game in the DIAA boys basketball tournament Tuesday 69-46.

Smyrna broke open a close game at the half by posting a 17-11 third quarter over the Hawks, then opened the final period on a 17-0 run to lead 60-32 on a “crowd-pleasing” breakaway slam by Lish Gregory.

The Eagle defense held the Hawks scoreless for nearly 5:00 of the 4th quarter as Coach Andrew Mears credited the team’s execution and feeding off the home crowd.

The two teams were tied after the opening quarter at 13-all. The highlights included 2 three-point shots from Smyrna’s Devin Demoe and 8 points by the Hawks’ Robbie Johnson as he was dominating in the paint.

Majesti Carter got the home crowd going with 2 three-pointers in the second quarter. Carter scored 9 of the Eagles 13 points in that quarter, and Smyrna took a 26-21 lead at the break. There were four ties in the 1st half.

St. George’s junior guard, Aaron Rambert nailed his team’s first long range shot early in the 3rd quarter to close the gap to 28-26. However, Smyrna used an 8-2 run to push the lead back to 8 points.

That run was capped by Daniel Lerro’s deep three in the corner. Following a basket by the Hawks’ Naaman Tucker, Smyrna finished the quarter on a bucket by Demoe, a three-pointer by Gregory, and a breakaway layup off a steal by Carter to grab a 43-32 advantage with 8:00 left.

The 4th quarter “brought the house down” as Smyrna scored 17 unanswered points to take a 28-point lead. Gregory drained a shot beyond the arc to start the 4th, had two slam dunks, and scored 13 of those 17 points in the run as the student section plus home fans “rocked” the gym.

Gregory scored 21 of his 24 points in the 2nd half to lead the Eagles. Carter added 17 and Demoe contibuted with 10. The Eagles only made one shot beyond the arc when these two met a week ago. In this game, Smyrna connected on 8 three point shots.

The Eagles will travel to Wilmington Thursday for a 2nd round game against Howard.