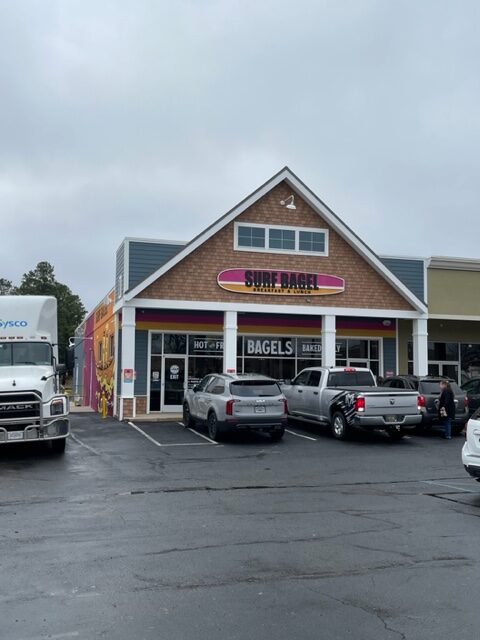 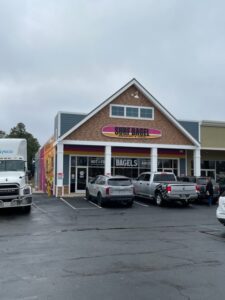 After a soft opening on Thursday, Surf Bagel officially opened their new Milford location on Friday, December 16. The parking lot and the restaurant were packed all day, according to Matt Patton, Vice President.

“We are so stoked to be open in Milford,” Patton said. “It has been a really busy day today; I think we may have served over 700 people in the new location. Normally, we do a soft opening, but somehow the word got out we were open, and it has been extremely positive already.”

When the company first announced that they planned to open a new location in Milford, Scott Kammerer, President of SoDel Concepts who owns the Surf Bagel franchise, said that he had always loved Milford. He recognized the town as a growing area with incredible people and he was excited to see one of their restaurants open downtown.

Surf Bagel is known for its authentic, fresh bagels, accompanying spreads as well as creative breakfast and lunch sandwiches. The Milford menu is the same as their other two locations while 45 new jobs will be created as part of their opening.

“We do plan to do a ribbon cutting or official grand opening in the future,” Patton said. “Right now, we wanted to get the store open and iron out any bugs that may exist before we do the official opening. We are open from 6:30 AM until 2 PM every day, only closing two days a year on Thanksgiving and Christmas.”

The Lewes location, the flagship store for Surf Bagel, opened in 2004, the vision of brothers, Dave and Tom, who wanted to combine two passions – a love of surfing and a love of good food – to the beach area. At the time, there was not a place in the beach area that served homemade New York-style bagels, which led the brothers to focus on that as a menu staple. The business grew with many customers visiting almost every day and the Midway location opened in 2017.

“As a coastal business, we appreciate Milford’s rich history as an important hub in Delaware,” Kammerer said. “Its history, attractions and communities have much to offer visitors and residents.”

The new Surf Bagel location is located at 204 Northeast Front Street, next to Arena’s.