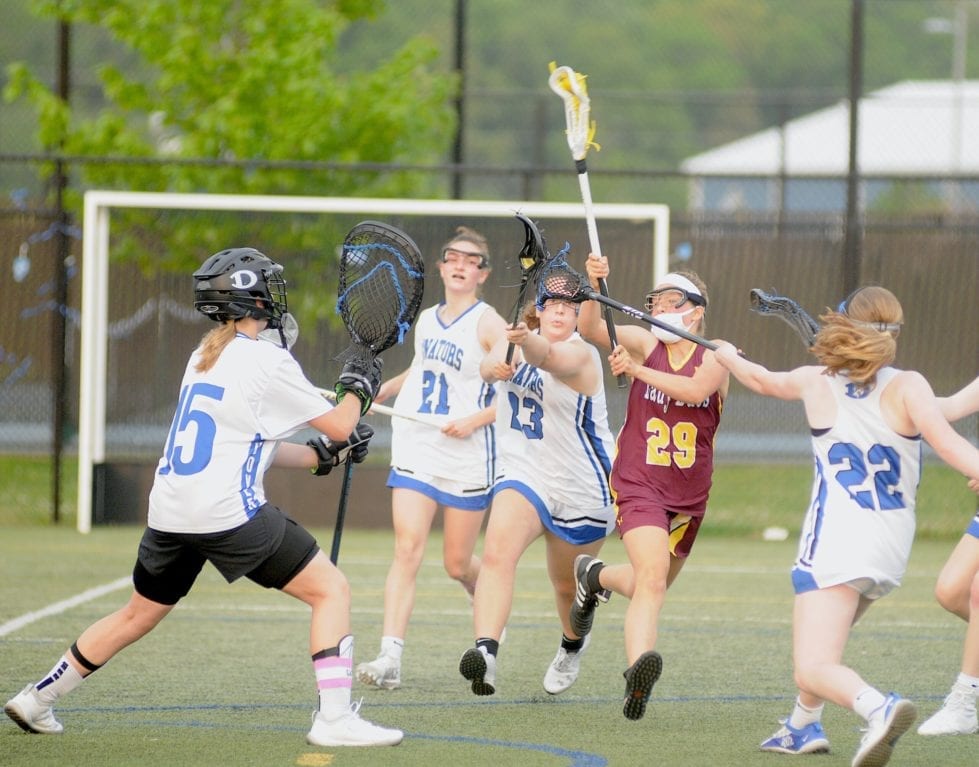 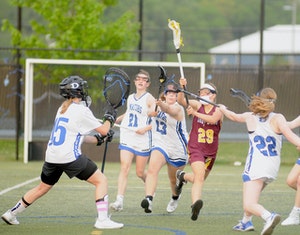 But it is the first time the trio of eighth graders have played the sport at the varsity level. In fact, it’s the first varsity season for the entire Milford High girls’ lacrosse program.

You wouldn’t be able to tell that by the way Frederick, Zimmerman and Masten have been playing this season, though.

“It’s definitely special for us — we’re going to remember this forever,” Frederick says of getting to play varsity this year. “It kind of makes me speechless because I’m just so happy we get this experience and that everyone gets to do it together. Without a season last year it just makes it even more fun and we’re even more grateful for the games.” 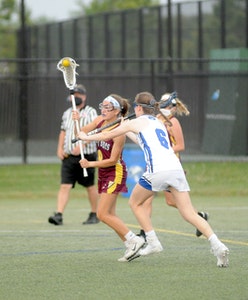 After making the high school team as eighth graders this spring, the trio has been a crucial part of the young squad’s development throughout the season.

“It’s such a developmental team, it being the first and last year having nothing and obviously some of these girls who are playing had never played this sport before in their life — they’ve been picking up things left and right,” said head coach Amanda Frampton. “Our three eighth graders, I just love them to death. They’re so sweet, so positive. They’ve played travel before this so they have plenty of experience and they’re bringing it to the team.”

It wasn’t supposed to be the team’s first season at the varsity level, but thanks to last year’s schedule being wiped out due to the COVID-19 pandemic, the program opened its first varsity campaign with a 15-7 win over Hodgson Vo-Tech High on March 22.

Zimmerman and Frederick scored four goals each in that win while Masten added two of her own. Zimmerman also tallied three assists.

In nine games, Zimmerman has scored a team-high 33 goals, including two games in which she scored a game-high seven times. Frederick has netted 18 goals in nine games for the Bucs while Masten has tallied 10.

Frederick says she’s been playing lacrosse since before kindergarten, while Masten and Zimmerman each started playing a few years ago. The trio have used that previous experience to help some of the older girls on the team who are just picking up the sport and are still learning the fundamentals. 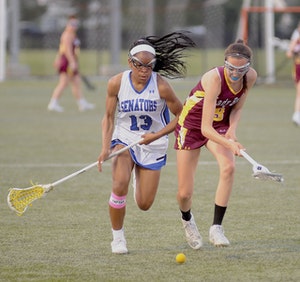 “It’s a really great opportunity for us to be able to play varsity as eighth graders and we have a lot of experience so we are able to help some of the older girls as well,” said Zimmerman.

The win-loss record doesn’t tell the whole story and, especially for Frampton, even the losses feel like wins sometimes as the girls continue to develop and get better every day.

“As a coach you always want them to win, but honestly I couldn’t care less if they win anything else (this year) as long as they continue to get better and grow,” she said. “These girls have such a good future and they’re honestly the youngest team in the state of Delaware and we’re probably one of the only ones who just started the program … Everyone else has years on us. So they’ve been doing phenomenal and I’m really proud of them.”

With six games left on the schedule, Milford visits Mt. Pleasant High Monday, May 3 at 3:45 and has three tough remaining Henlopen Conference Northern Division matchups with Caesar Rodney High (May 5), Cape Henlopen High (May 11) and Polytech High (May 14).

“The future really looks bright for this team,” said Frampton. “I think it’s really going to grow and it’s going to be really phenomenal for this team in the next few years.”