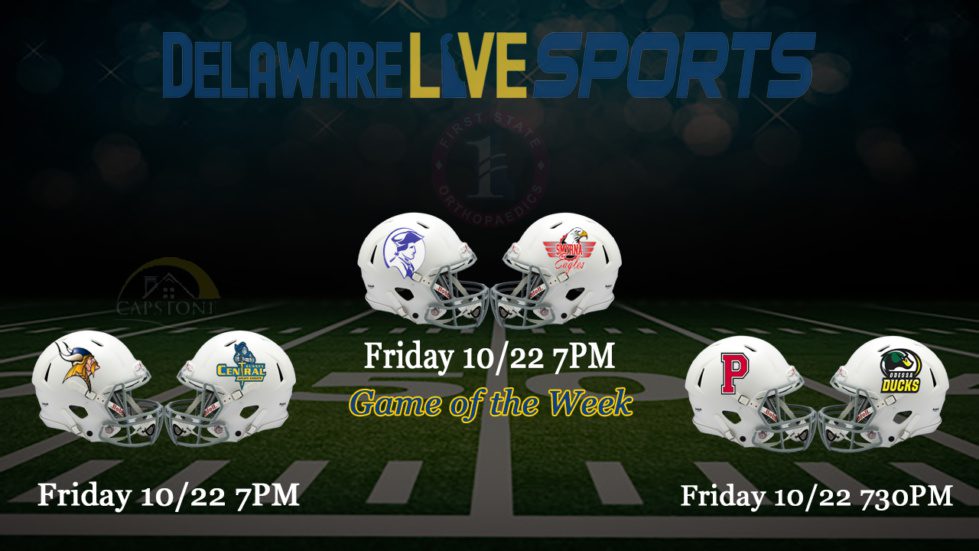 Both teams come into this contest with 2-4 records on the season. Polytech’s two wins are over First State Military Academy and a good Charter of Wilmington football team. In their last contest they suffered a loss to a tough Indian River team. Odessa is the newest school in our state. The team is made up of all underclassmen as the school starts its first varsity season. Their wins came over First State Military as well and Early College @DSU. This will be our first ever live production from the new & beautiful campus of the Odessa Ducks.

Cape Henlopen comes into this matchup on a high note after they got their first victory of the season with a 14-7 victory over Caesar Rodney. Cape has battled some adversity over the season as they lost some key players at key positions.  They have a tough schedule this season and this game wont get any easier. Sussex Central is 3-3 on the season. They will look to get back on the winning side of things after suffering a loss at Dover last week. This team loves to play at home as they host Cape at home in the castle.

This game has lined up to be a big time 3A battle of top ranked teams. Dover is having a turnaround season after coach Chip Knapp took over the squad. Dover is 4-2 on the season and only in state loss came to Appo a couple weeks back. Last week they got a signature win over Sussex Central last week. Smyrna is 4-2 on the season & they to have only one loss to an in state team which is #1 Middletown. Smyrna is coming off a bye week, but they had a big win before that as they made a great comeback to defeat St Georges at home. This game should be fun to watch as two big play offenses faceoff in Smyrna.

This week we will have special guests from our Capstone Homes Rivalry Game of the Week as we will be joined by Cape Henlopen & Sussex Central football teams. We will also reveal our football top 5 rankings, and talk about this week’s upcoming games. Be sure to tune in as we also reveal our 10 ten plays of the week.