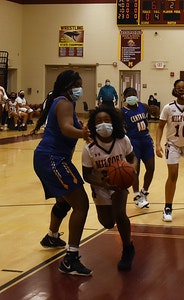 This year was eagerly anticipated for the Milford girls’ basketball team, with a young team coming back with a year’s worth of experience under its belt. In the age of COVID-19 however, not everything happens as expected. With three juniors expected to start deciding not to play this season, due to the deadly outbreak, Milford is a little less experienced than it had hoped to be. Speaking with coach Kevin Barkley it is clear the plans for this season have changed. “We have a younger group than expected, but that’s OK. We are going to take advantage of it and get some players experience they normally wouldn’t get. For younger players, jumping up to the varsity level and having them play big minutes every game isn’t ideal, but it will pay off in the future.”

With just one senior on the squad, Haliegh Baker, the team’s leading scorer this season, Barkley has counted on her to help keep this young group together. “Haliegh is a solid player and she is helping to bring the younger players along. It’s great to have her on the court because she is a player and demonstrates her leadership, even when things aren’t going our way,” Barkley said. 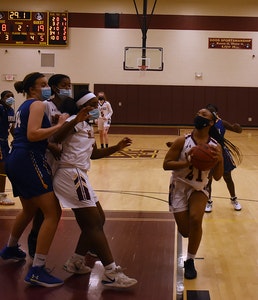 Looking past Baker, eighth graders Tayanna Bibbins, Airelle Gray and Arianna Hughes are seeing significant minutes. While it is unusual to see one eighth grader on a squad, let alone three, Barkley knows that the minutes they see this year are going to provide precious experience for players of their age. “These young players have come in here and hit the ground running. What they lack for in experience, they are making up for in heart. Every game, every practice they are improving. That is what the goal is for this season,” Barkley said.

Freshman Khyla Tilghman is also seeing lots of playing time and exhibiting a great deal of potential. She is another player that Barkley is counting on not only for points, but leadership. “While she is just a freshman, Khyla has shown that she loves the game and really plays hard. That is the kind of attitude we are trying to bring to this team. We need to learn and understand how to win, and she is going to be a big part of it.” 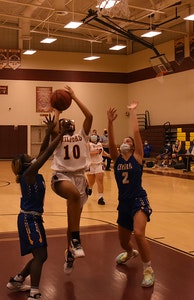 This past Friday, Milford hosted Sussex Central and was on the wrong end of a 42-22 score. While the score was lopsided, the Buccaneers showed in the first quarter what they are capable of as they played solid defense and came out of the quarter with a 6-5 lead. “That first quarter was important for them, it showed them what they can do. This is what learning is all about. To ask a young team to play that intense for four quarters is difficult, and we obviously wore down a bit. But what we can really take away from this game is our girls didn’t quit, no matter what the scoreboard said, we played till the end and that is all I can ask for,” Barkley concluded.

Milford has started the season 0-2.