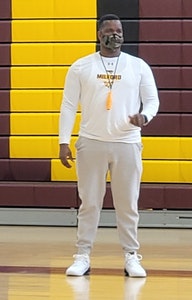 A split second, that’s all it was between Milford winning the D-I State title and losing it. In wrestling that split second can seem like an eternity. Unfortunately for Milford last season, it was on the wrong end of that split second and would eventually fall to Smyrna, having to settle for second place. “That is just one of those moments where the call can go either way and it just didn’t go ours. It was so close, but I had no problem with the call,” Milford coach Don Parsley said.

Nothing is given in high school sports, so to expect Milford to enter the State finals or tournament for that matter, is nothing to be taken for granted. In today’s climate what most coaches are hoping for across all winter sports is to just be able to compete. While Milford sets a high bar for itself when it comes to wrestling, this year may be a little bit different. There will be no special tournaments, no invitationals, just 12 dual meets against mainly Henlopen Conference competition. “It’s going to be different this year, with what we have gone through over the last year, we have to be diligent and safe. We don’t know what the year is going to bring us in terms of sports, but we must make sure health and safety is out top priority,” Parsley said.

Milford graduated four key seniors last year – Bevensky Augustin, Gail Copes, Anthony Diaz and Dominic Feightner have all moved on. These were solid wrestlers and State finishers who will be hard to replace. However, the cupboard is not entirely bare. “We graduate wrestlers every season, so this is nothing new. The program adapts and moves on, that’s what we are all about here at Milford,” stated Parsley.

With some understandable reluctance, it has been a little bit of a different task this year filling out what would normally be a deep team. “Well, here we are at the beginning of January and we finally have everyone in the wrestling room. We have been working hard and I have no doubt that many other teams in Delaware have been in the same situation of trying to fill out their squads,” Parsley said.

Leading the charge for Milford will be the returning State Champion at 120 pounds, junior Jack Thode. Senior Corey Messick who has finished third and second at 113 pounds in the State tournament will be returning, along with junior Tim O’Hara who was also a third-place finisher in the State tournament last year. “I am really counting on those guys to step up in their leadership roles and help bring the young guys along. They have been working very hard during the off-season and I am really looking to see how their hard work translates to the mat,” said Parsley.

Some newcomers to keep an eye out for this year are 8th grader Trevor Copes along with his brother, sophomore Averi Copes. Some of the more experienced guys returning who saw varsity action last year are sophomores Ryan Mejia, Dwayne Wiltbank and junior Aaron Briscoe amongst others.

When asked what the team goals were for this season, Parsley answered “It’s always been about effort and leaving it all out there on the mat. We always aim high and while this year may be measured a bit differently, our aim is to be competitive in the toughest wrestling Conference in Delaware.”