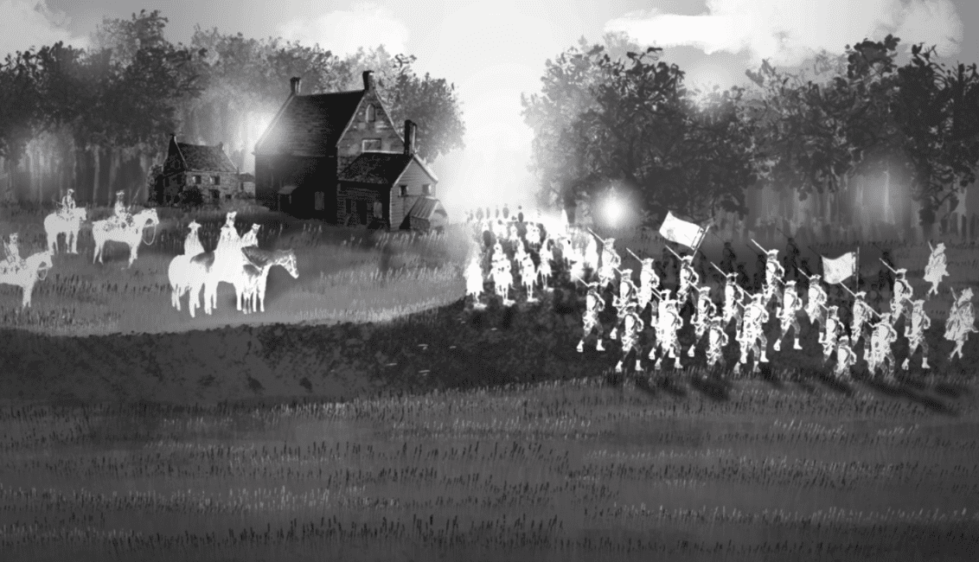 A Wilmington history buff has uncovered many of the roads and paths General George Washington marched Continental Army troops along en route to Chadds Ford, Pennsylvania for the 1777 Battle of Brandywine.

The George Washington Society of Delaware will hold a champagne luncheon at the Ed Oliver Golf Club on Sunday, Feb. 20 at 12:30 p.m. with Knightly as the featured guest.

“I’ve always had an interest in history and Delaware just has a fantastic history that not many people know about,” Knightly said. “I’m trying to uncover that history and make it interesting for people to learn about.”

In order to stop that, Washington positioned 20,000 Continental Army troops between then-Head of Elk and Philadelphia, near Wilmington — but he was outflanked.

After a clash at Cooch’s Bridge south of Newark, the British troops traveled north and Washington ordered his troops to deploy against the British at Chadds Ford. The resulting conflict became known as the Battle of Brandywine.

“For historians, it’s more sexy to focus on the Battle at Brandywine and nobody focuses on how Washington got there,” he said.

“There’s two reasons. Reason one is, that’s just not their major focus. They want to focus on the battle. And number two is that Washington didn’t write any orders to get there. It was done so quickly, all the orders were verbal orders and so there’s not a lot of written documentation.”

Some of the roads still stand that Washington marched his troops along en route to Chadds Ford, PA for the Battle of Brandywine.

The question of the Continental Army’s route to Chadds Ford sent Knightly on a five-year quest for answers — one that involved canoe trips along the Brandywine River, walks along its banks and long hours in the Hagley research library.

“I’ve also got some maps,” he said. “There’s a guy named Jacob Broom — if you’re familiar with Wilmington you’ll recall there’s a Broom Street — and Jacob Broom was a surveyor in the late 1700s.”

“When Washington brought the Continental Army to Wilmington, he needed a map and Jacob Broom made him a map in August of 1777,” he continued. “I found a copy of that map at the Hagley research library hidden in the files — I just stumbled across it. I had been looking for it and I had no idea where to look to find it and lo and behold, it’s the last file I look at and it’s got Washington’s actual notes on the map.”

That map, for Knightly, was “like a Rosetta Stone,” he said, because it showed him the road network in New Castle County and southern Pennsylvania in 1777.

That, along with regimental orderly notes taken by troops during their march to Chadds Ford, and newspaper articles from the 1800s, prepared Knightly to go into the field to trace Washington’s troops’ steps.

He said his findings could provide archeologists an idea of where to look for valuable historical artifacts.

One obstacle Knightly has faced is that much of Washington’s route traverses private property, including Granogue, a  du Pont estate by Smith’s Covered Bridge near the Pennsylvania/Delaware border.

Irénée “Brip” du Pont, who lives at Granogue, was surprised when Knightly told him that Washington had once stationed troops just beneath his property at Smith’s Ford.

“After Washington did reconnaissance of Chadds Ford, he issued an order and I have it,” Knightly said. “It’s a written order where he stationed a battalion of troops at Smith’s Ford, the ford right below the du Pont house there. Mr. du Pont was not aware of that.”

Fords are river crossings. Troops would have waded through these shallow waters to continue marching toward Chadds Ford. Much of the Brandywine was far deeper in 1777.

Knightly’s written a number of articles on his research and has even produced a short documentary.

Now, he plans to write more about his findings and eventually publish a book on a separate subject, the little known British occupation of Wilmington.

Knightly will present his research on Sunday, Feb. 20 at 12:30 p.m. The champagne luncheon will be held at the Ed “Porky” Oliver golf club, located at 800 N DuPont Road in Wilmington.

The luncheon is open to the public and costs $35. Attendees are asked to RSVP by email to [email protected].