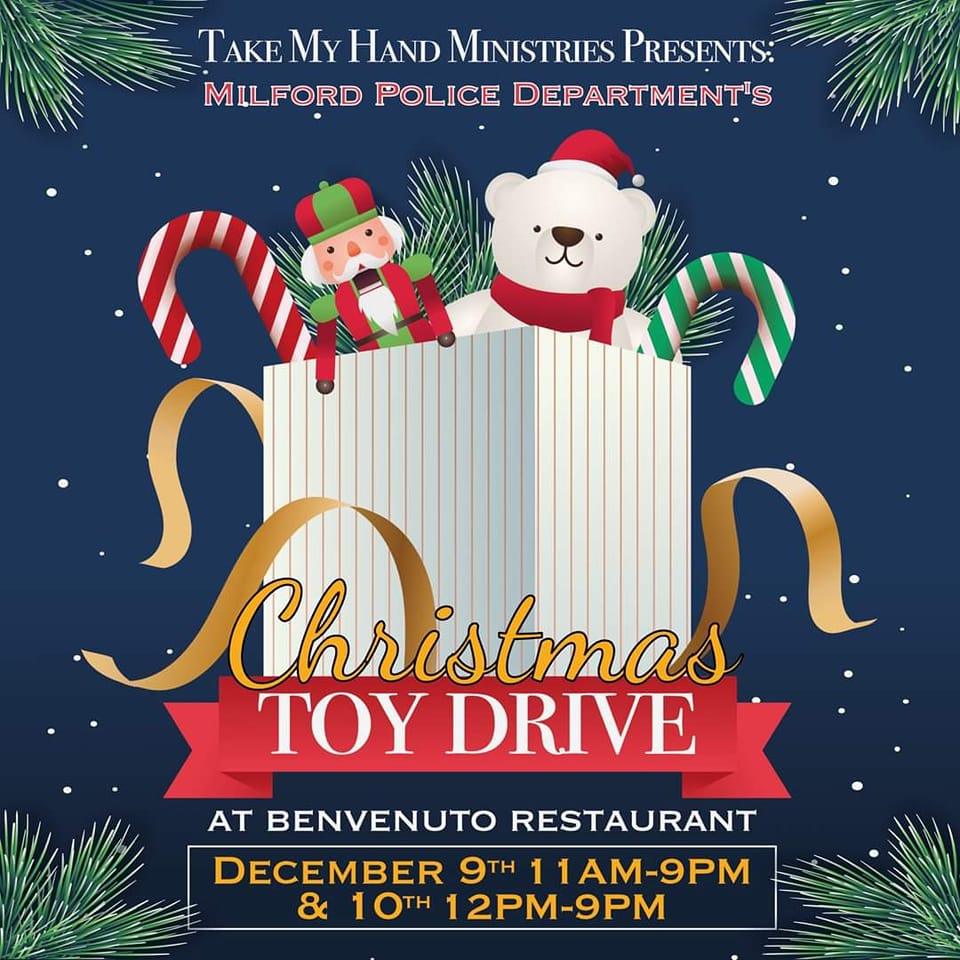 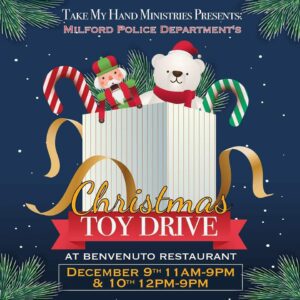 What began as a way for Poncho and Lisa Johnson to teach their son, Colby, that Christmas was not just about getting gifts when he was five years old will continue this weekend at Benvenuto. The annual Milford Police Department Toy Drive will be held at the restaurant on Friday and Saturday, December 9 and 10 during the restaurant’s regular hours.

“Anyone who brings in a wrapped toy worth $25 or more will receive a $25 gift card to Benvenuto,” Mrs. Johnson said. “We also will take a $25 Walmart gift card as they can use that to purchase items that are not provided. Take My Hand Ministries pays for half the gift card and Benvenuto pays for the other half in order to encourage people to donate.”

When their son was just five years old, Mrs. Johnson explained that he began talking like most children do around the Christmas season, telling his parents about all the things he “wanted” or hoped to “get” for Christmas. She and her husband felt this was not a good thing for him to focus on and she reached out to the Milford Police Department to see if they could assist with a toy drive.

“At that time, they didn’t even have one,” Mrs. Johnson said. “So, we decided to do it ourselves, just me, Poncho and Colby. We did it here at the house.”

Eventually, the Johnson’s began to include friends and family in the toy drive which grew to be a huge event. They would have people bring a gift to the house where they would provide wagon rides with a police escort to deliver the gifts to the police station. Everyone returned to their house for pizza and fellowship.

“It grew so big, we ended up having to get school buses to carry people to the police station,” Mrs. Johnson said. “We had more than 100 people at our house and Santa would make an appearance. We had a bonfire where we roasted marshmallows and had hot chocolate.”

As Colby and his friends outgrew the wagon rides, fewer people were coming to the house for the celebration although they continued to deliver gifts. This led the Johnson’s to offer a free Sunday brunch at their home and turned over management of the toy drive to Take My Hand Ministries. When they opened their Tuscan restaurant, Benvenuto, they decided to move the Sunday brunch there.

“We held the first brunch before we were even open,” Mrs. Johnson said. “There were not even booths installed yet. The Bridge radio station set up tables for us the night before and we held a blessing of the restaurant party with the ministry handling the cost of the food.”

In 2020, the COVID pandemic forced the Johnson’s to cancel the brunch, but they still wanted to offer something in exchange for the donated toys. They decided to offer the free gift cards instead.

“People liked it so much that we figured we might as well keep that going,” Mrs. Johnson said. “For each toy or gift card donated, you receive a $25 gift card that you can save and use yourself or give as a gift.”

Over the years, Mrs. Johnson said that people have donated bicycles, scooters, hoverboards and more. Because so many of the gifts are for younger children, the gift cards are used to take parents shopping for children who are 12 and older.

Gifts can be delivered to the restaurant from 11 AM to 9 PM on Friday, December 9 or 12 Noon to 9 PM on Saturday, December 10. Once collected, all gifts are turned over to the Milford Police Department for distribution.