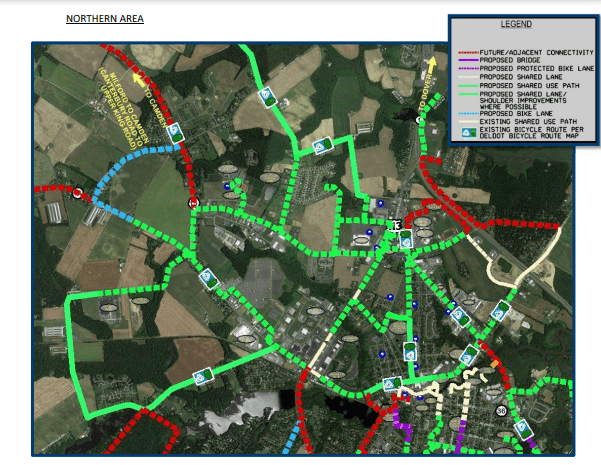 Northern Loop of a proposed Bicycle Master Plan adopted by the City of MIlford.

Milford City Council recently adopted a Bicycle Master Plan presented by Sonia Marichic-Goudy, Associate Vice President of Century Engineering. The was created with input from DelDOT, the Bicycle Advisory Committee and members of the Milford community, including Lifecycle.

“The City of Milford was awarded the Bicycle Master Plan Grant to provide a citywide Bicycle Master Plan,” Marichic-Goudy said. “It builds on the previous studies, in particular the 2011 Bicycle Plan. It’s consistent with the city’s comprehensive plan and it seeks to improve the bicycle level of stress that is generally defined by DelDOT for cyclists within the city. It looks to reduce the gaps in current infrastructure and ultimately provides recommendations and prioritization of those recommendations to collectively create a comprehensive bicycle network.”

Marichic-Goudy explained that the goal of the plan is to provide the citizens of Milford with a dynamic, active transportation system with trails, roads and paths that are inclusive, safe and functional for all levels of recreation as well as for commuters. The plan includes a comprehensive list of improvement options designed to address gaps in the existing network and create an overall bicycle network within the city. The plan also includes future plan projects as well as projects that are on the books but have not yet been completed.

“The City of Milford is unique in that it lies in both Kent and Sussex County,” Marichic-Goudy said. “So, we wanted to leverage this and make sure we are able to get funding from multiple sources, hopefully at the same time when the project’s going to design. So, we broke down the ultimate master plan into three sub-regions. The Northern Loop, the Southwest Loop and the Southeast Loop. Each of these are connected with each other so you could have standalone projects that ultimately will help connect the entire city.”

Marichic-Goudy provided council with slides that indicated bicycle routes that had been prioritized by DelDOT’s prioritization tool as well as the City of Milford. Green on the maps indicated routes with the highest priority while red were future connections. The planners also looked at intersections on each route, determining which would need configuration to make them safer for pedestrians and cyclists. The plan also included routes that would connect the city to outlying areas in order to bring economic vitality.

“The last part of our study looked at cost because in order for these projects and these routes to move forward into design and construction, we needed costs,” Marichic-Goudy said. “These were very large as this is a very large-scale plan. So how do you associate cost? What we did is we looked at industry standards, recent bicycle routes that were constructed through DelDOT and we develop a cost per foot. So, for example, a shared use path would be approximately $350 per foot.” Based on this estimate, costs for the routes in the plan ranged from $1 to $5 million.”

After the presentation, Mayor Archie Campbell asked how far out in the road a bike path would be, referencing a temporary path on Marshall Street.

“It depends on the facility type,” City Planner Rob Pierce said. “If it’s a shared path, there’s going to be some sort of separation between the travel lane and the actual bike path. That’s the most ideal situation giving some separation from the rider and actual vehicle traffic. So, it really depends on the location. Where we’re asking for shared use paths, we’re likely going to end up having a grass strip similar to what you have here at Chick-Fil-A or what you have around the Sussex Health Campus. Those are bike paths that are along the frontages of those sites. They’re not adjacent to the road. In areas where we ran out of real estate, we may have to do things like improve shoulders where you’re riding in the shoulder adjacent to traffic but that would be in low-speed situations.”

Pierce explained that the Marshall Street project was unique because it was a Pop-Up Project with the University of Delaware designed to lay out a potential scenario. Because they had limited resources, the city chose to put the bike lane on one side of the road, but there were recommendations to place a bike lane on both sides of Marshall Street. James Puddicombe, City Engineer, stated that DelDOT was already working on some of the sections outlined in the plan, pointing out that the state agency was currently working in the Silicato area.

“Just remember that when the TOP project heading out the east side of Milford is done, that is going to be a big chunk of downtown,” Pierce said. “The police station is going to construct a portion of the shared use path. DelDOT already has in their project list similar to what James was saying from Rehoboth Boulevard out to the overpass. So, a lot of this is in the works. Some of the site plans we have had in recent years, on Walnut Street as you get down to Simpson Crossing and Milfod Ponds, their developments are constructing a shared use path from Milford Ponds all the way up to McCoy Street. So, there’s large sections already being constructed.”

Later in the meeting, council voted to approve the Bicycle Master Plan unanimously.