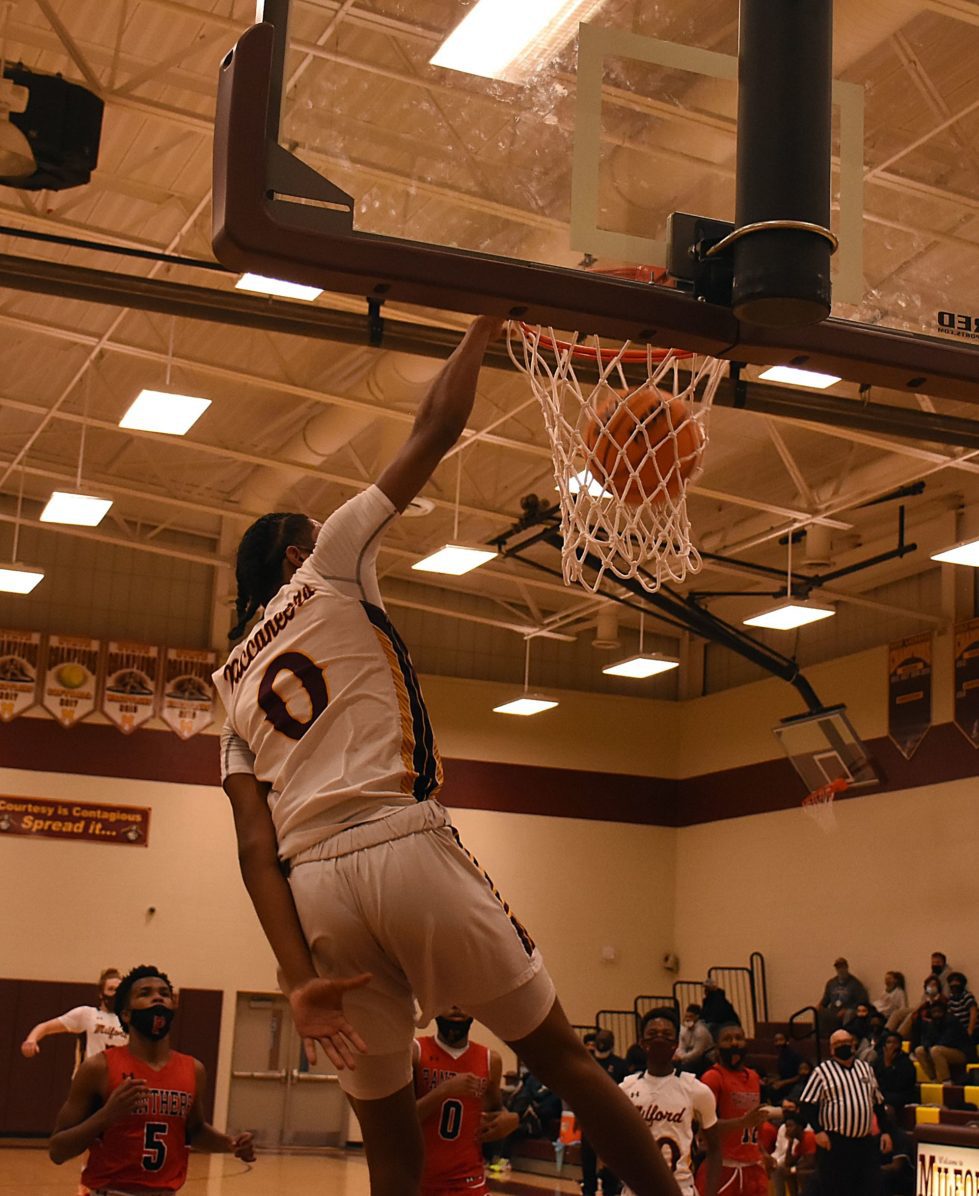 Last season was not an easy one for first year Milford basketball coach Lamarr Shorts. Between COVID and the youth of his first-year squad, Shorts knew it was going to be a tough time for everyone. One thing he also knew was that his team was going to be well served this season from the experience they had garnered. A great deal of it was evident last Wednesday as Milford hosted Polytech in what turned out to be a 65-57 victory – which was much closer than the final score would indicate. The play which put the exclamation point on the game came late in the fourth quarter as Buccaneer senior A.J. Kravitz broke down the right side of the lane and slammed it home giving Milford a 10-point advantage, with just under four minutes to go.

While the Kravitz dunk may have been the icing on the cake, it was the team play, hustle and savvy which provided the substance to it. Kravitz would lead the Buccaneers with a team- high 21 points on the evening. However, this was far from a one-man show for Milford. Whether it was the varying defenses Milford employed or players making key plays in big moments, this was a team win for the Buccaneers. “I was really thrilled with how we stuck together tonight, how our team was able to maintain their intensity throughout the entire 48 minutes tonight. That was something we had a hard time doing last season, but what you saw out there tonight is the kind of effort we want to bring to every minute of every game,” Shorts said.

As mentioned earlier, the game was close through most of the contest, with Milford finally pulling away in the fourth quarter. The key for Milford came at the free throw line, where the Buccaneers went 8-of-9 in the game’s final five minutes. While free throws are something most teams work on religiously, Shorts has taken a bit of a different approach as to how he is treating them in practice. “We still shoot them, but we don’t wear our players out doing it. These guys have been around long enough to know that they are important, so why continue to pound it into them. We made up our mind that when we go to the line, we are going to be relaxed about the process. The players know how to shoot them, so we just let them,” Shorts said.

Besides the game’s fourth quarter, the game was even throughout. Milford had the game’s biggest lead midway through the first quarter, which Polytech was able to erase. By the time the opening frame ended, Milford held just a 16-15 advantage. From that point on, until midway though the fourth quarter, the teams were never separated by more than three points, quite rare for a basketball game. “You have to congratulate both teams on this game, neither refused to go away, even at the end when it looked like we had it locked up, Polytech still made some crucial three-pointers to try and stay in the game,” Shorts said.

While the game was a solid effort for the most part by Milford. They missed several plays in transition, which could have made the game much easier for them to win. It is something that Shorts believes Milford will improve on as the season goes on. “We weren’t as good as we wanted to be in transition tonight. It’s the first game of the season, so you can let it go a bit as the guys are still getting their timing down. I expect that aspect of play to improve as the season goes on,” Shorts stated.

Besides the 21 points from Kravitz, Milford also had two other players in double digits as sophomores Jordan Norman (14) and Desmond Aladuge (15) were big contributors as well. Aladuge was also a solid presence in the paint, an area where Milford has been lacking in over the last few seasons. “Desmond is just coming from football season and is in very good shape, even after all the hard work he did on the field. I am pleased that he was able to contribute to us right away, he has gotten into basketball shape very quickly,” Shorts said.

While some people score more points than others, based on their roles on the team, perhaps no play summed up what Coach Shorts is looking for when the Milford lead was at six points with about four minutes remaining in the game. A mad scramble ensued at near mid-court with bodies flying everywhere. Milford senior Javier Scott made a crucial play, diving for and gaining possession of the ball, while quickly calling a timeout to give Milford the crucial possession. “That is what this team is about, it’s about not giving up on a play. I was getting ready to call timeout when I saw him gain possession of the ball, he just beat me to it. That is game awareness, selflessness, and leadership, all in the span of about three seconds, that’s how you win basketball games,” Shorts concluded.

Milford travels to Caesar Rodney Tuesday with tip-off set for 6:30.