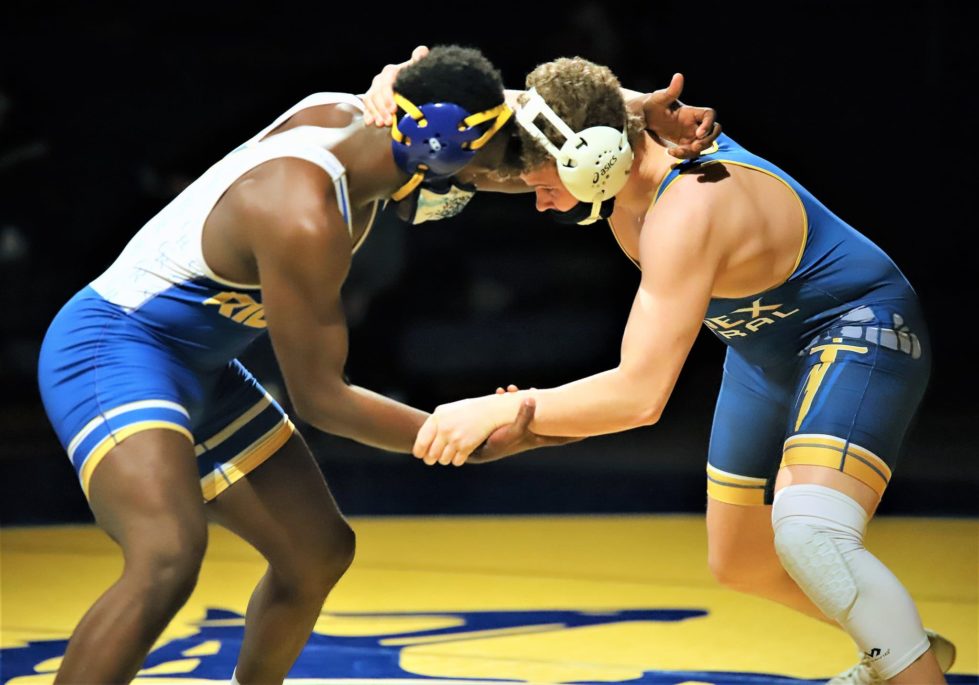 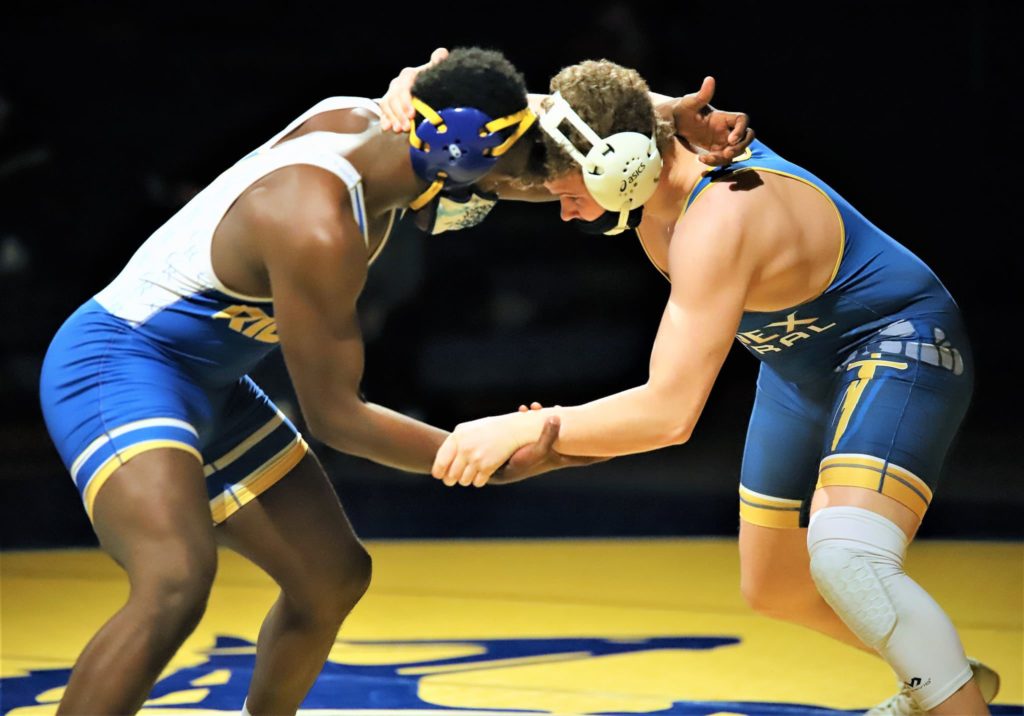 Camden-Wyoming – Caesar Rodney and Sussex Central squared off two months ago with the Riders narrowly winning by one point.

The two rivals met again on the mat in the D.I.A.A. Dual Meet State Tournament quarterfinals on Wednesday night both teams knowing every team point was valuable.

Caesar Rodney won eight of the 14 bouts and recorded three pins enroute to a 34-31 victory and advances to the Division I semi-final round where they will wrestler Salesianum.

“We knew our last match with them was a barn burner, they are well coached and we had a few things go our way tonight. The flip at 170 was huge for us,” Caesar Rodney head coach Dan Rigby said.

Sussex Central jumped out to a quick 9-0 lead with Chase Murray winning by technical fall over Cole Moffett at 113 pounds followed by Evan Cordrey’s 15-7 major decision over Antonio Darby at 120 pounds.

Caesar Rodney answered by winning the next four bouts.

Cameron Cataldi won a 10-5 decision over Gunnar Abbott at 138 pounds followed by Cody Waski winning a 20-7 major decision over Justin Negron at 145 giving the Riders a 16-9 lead.

Caden Cope won a 10-0 major decision over Mason Bush for the Golden Knights at 152 pounds, but the Riders D.J. Baker answered with a pin at 160 pounds over Cody Layfield in 5:23 putting the Riders in front 22-13.

“When D.J. is on he is really tough kid to beat. What he did for the team tonight perseverance, staying mentally tough in that match was really big for us tonight,” Rigby said.

For Baker the pin was a feeling of retribution from the first match back in December where he was taken down late in the match losing 7-5.

“My team needed me, I could have given up when he had that arm bar, but I heard everybody chanting my name and I knew I had to do it for my team. They are my family and they would do it for me,” Baker said.

Brock Conner extended the Riders lead to 25-13 with an 8-5 decision over Ivan Neal at 170 pounds.

Caesar Rodney bumped Shamar Nelson up to 220 pounds where he responded with a pin over Ryder Robinson in 4:29.

“I felt really good on my feet tonight and was able to get some early takedowns, but I knew I would have to pin. I was working on the cradle, but he was defending it, I saw a cement mixer open and went for it,” Nelson said.

With Nelson moving up Josh Dyer moved up to 285 and won a 2-1 decision over Michael Harmon sealing the match for the Riders 34-25.

Malachi Stratton received a forfeit at 106 pounds for Sussex Central.

“At this point we are just happy to be moving onto Saturday.”

Caesar Rodney’s Antonio Darby (Top) puts Sussex Central’s Evan Cordrey to his back during their 120 pound bout Cordrey went on to win by a 15-7 major decision. Photo by Michael Williams