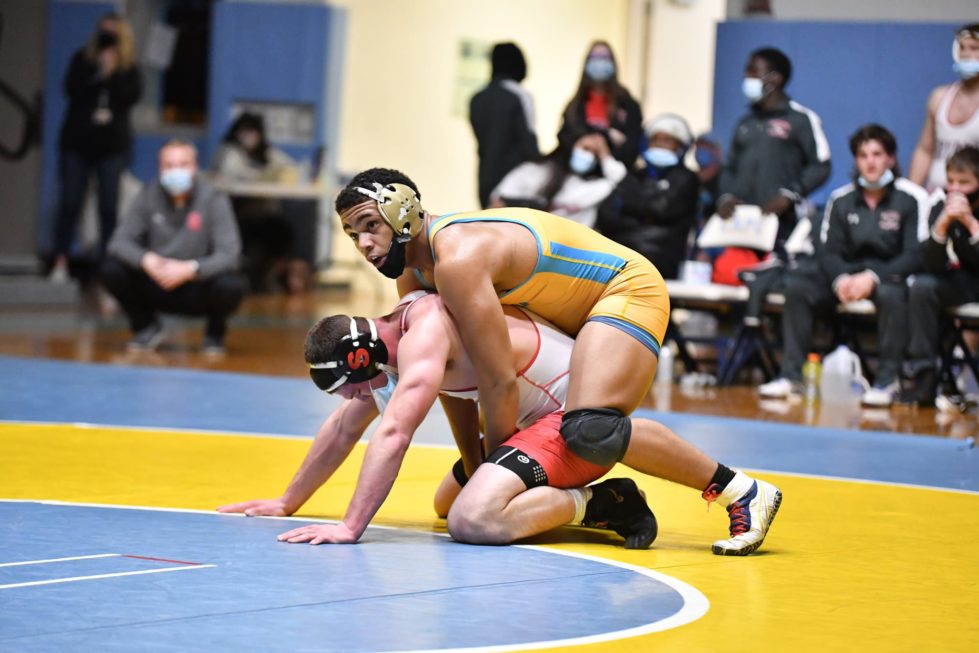 Cape Henlopen’s Alex Taylor looks toward the bench for instruction during his 195 pound bout against Tyler Downward of Smyrna. Taylor won a 19-12 decision photo by Dave Frederick

Lewes – In wrestling dual meet action results often come down to matchup, but to get those matchups it can come down to something as simple as the coin toss prior to the match.

Cape Henlopen won that coin toss on Wednesday night giving head coach Chris Mattioni the ability to make a move in the lineup that would help lead to the Vikings 34-30 victory over Smyrna in a Henlopen Conference Northern Division match.

“When they won the flip we knew it was not good, we were going to make the same move at 138 pounds if we had won the flip,” Smyrna head coach Aaron Harris said.

The match began at 182 pounds where Smyrna’s Derek Davis recorded a pin over Jack Wiggins in 3:37.

Cape Henlopen answered winning three straight bouts starting with Alex Taylor winning a 19-12 decision over Tyler Downward at 195 pound. Dalton Deevey followed with an 11-6 decision over Kael Howell at 220 and Lucas Ruppert recorded a pin over Chijioke Eule in 1:27 at 285 pounds giving the Vikings a 12-6 lead.

As the match turned over to the lightweights the fortunes changed for the Eagles.

Warren Coates tied the match for Smyrna pinning Jacob Goodsell in 2:54 at 106 pounds. Wyatt Miller followed with a 6-4 decision over Max Meadows at 113 pounds.

Gabe Giampietro continued the streak of Smyrna victory pinning Holt Baker in 1:49 at 120 then the Eagles Qwantez Watkins delivered a 12-5 decision over Josh Wright at 126 pound to give Smyrna a 24-12 lead.

Cape’s Josh Alveres would put a stop to the Smyrna string of wins with a 6-2 decision over Jake Wagner, but the Eagles would get back in the win column with a pin by Jamar Wells over Braydon Cole in 1:54 at 138 pounds.

Trailing 30-15 with four bouts left Mattioni was able to employ his lineup change by bumping Andrew Schaen and Mikey Frederick up a weight class to cover for defending state champion Luke Bender who is out for the season with an elbow injury.

The pair delivered key bonus points in their victories. Schaen won a 15-4 major decision over Tyree Heath at 145 pounds followed by Fredericks 18-2 technical fall over Michael Blair at 152 pounds.

“Losing Bender puts a void in our lineup, depending on the match ups we have the ability to move Mikey and Andrew up,” Mattioni said.

Mattioni continued, “Our goal is to put us in a position to win dual meets. Since win won the coin toss we were able to move Andrew off of Wells and maximize our points.”

In the night’s finale Carson Kammerer controlled the match with a pair of takedowns and a reversal, but struggled to turn the Eagles Shaun Atkinson until the 5:17 mark where Kammerer put Atkinson on his back and recorded the pin giving the Vikings a dramatic 34-30 comeback victory.

Cape Henlopen improved to 4-1 and will next compete in the Grapple at the Brook at Springbrook High School in Maryland. The Vikings will return to dual meet action on Wednesday, January 19 when they will host Polytech.

Cape Henlopen will next appear on our Delaware Live Sports livestream on Friday, January 21 when they travel to Delaware Military Academy. The match is scheduled to start at 6:00pm.

Smyrna drops to 1-1 and will host Milford on Friday, January 14.

Smyrna’s Gabe Giampietro rides Holt Baker during their 120 pound bout on Wednesday night. Giampietro won by a pin in 1:49 photo by Dave Frederick