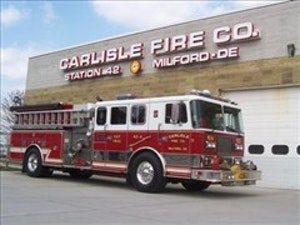 At a recent workshop, Carlisle Fire Company provided Milford City Council with details on how they were managing a severe volunteer shortage, an issue that is plaguing volunteer companies throughout the state. Ryan Knowles, Chief of Carlisle Fire Company, explained that the company has expanded recruitment in an effort to bring in more volunteers, a task that was growing more and more difficult.

“Let’s face it, in today’s world, the volunteer world is not the greatest thing to get a hold of.  Thirty years ago, when I joined, the firehouse was the place to be, that was a place where you stayed out of trouble,” Knowles said. “That’s the place where you went, where you learned, where people furthered their career. In today’s world, we have travel everything for the kids. I don’t think there’s a sport that they don’t travel in. Parents are working two jobs. Sometimes three. People are working nights. They’re working weekends. There’s not a lot of time where we have people eligible for volunteering basically.”

About ten months ago, Knowles stated the fire company implemented the dual role of EMT/Firefighter and they try to have at least three members as well as two EMT/Firefighters on the trucks. However, it was becoming increasingly difficult to meet those requirements, something all fire companies across the state are facing. Knowles explained that the fire company covered 4,000 plus ambulance runs each year as well as more than 700 fire calls. As far as response times, the NFPA recommends response times to be within 10 minutes of dispatch. In Delaware, the standard is six and a half minutes.

“If we don’t respond within six and a half minutes, the re-alert us and then re-alert the next company, which could be Houston, could be Slaughter Beach, could be Frederica,” Knowles said. “We are well under the standard response time for working fire alarms as we are re-alerted for them at four and a half minutes. A lot of our members do not live in town, so they are fighting congestions, fighting traffic, fighting every single thing everyone else does, but we’re trying to get to the station quicker. With that being said, I do not think we have a problem with response times.”

Knowles explained that he had been asked why other companies were responding to alarms in Milford, stating that this may appear that Carlisle was not meeting response times. Actually, that is a county standard that requires two stations to report to a working fire or an accident with entrapment. Knowles explained that the company was trying to be competitive in an effort to attract both volunteers and staff. He stated that most of the incentives were in higher salaries which has required the company to come to the city for additional funding.

“Have you looked into any possibility of bringing a medic unit to Milford?” Councilman Andy Fulton asked. “We’re not a small city and Milford is growing. We are split between Kent and Sussex County.”

Because paramedic units are controlled by the county, Knowles pointed out that the fire service had little to do with where the units were located. He explained that Carlisle fought for a unit but the last one placed in Kent County was put in Frederica. Because Dover is so busy, that unit tends to be pulled north rather than south toward Milford.

“I see from this, from council’s responsibilities, and I see Milford is supported by a foru-legged stool of public service,” Councilman Jason James said. “You have police, you have education, you have fire service and you have a city manager. We can hire the city manager and the chief of police, but we don’t own the school district and we do not have a say in the fire service. I can tell you, speaking to the chief and members of council, if we don’t start a good and true working relationship with the fire service, then fire protection in the city of Milford will become a problem.”

Councilman James stated that volunteerism in the fire service had been dwindling for many years and that it was not specific to Milford. He felt that council should not just sit and wait for there to be no more volunteers before they stepped in to protect the citizens. Knowles explained that was the reason for the fire company attending the meeting, that they could seek alternative funding, but they wanted to work with the city to continue bringing quality fire protection to the citizens. Knowles also stated that he was open to any incentives council wanted to provide to encourage volunteering for the fire company.

“We get a $1,000 tax credit now from the state of Delaware,” Knowles said. “For a lot of people, that helps and for some it doesn’t. I don’t live in city limits, so I don’t want an incentive. I’ve been doing this for 30 years. But if you want to pay our volunteers an incentive, I am 100 percent for whatever gets them to the firehouse and volunteer with us. We have spots other than active firefighters on trucks. I have also talked to the city manager about city employees who are members. When the fire whistle blows, we need help. I will make a promise to the city that if you let your employees go to an alarm, I will have them back to work in 30 minutes. In 30 minutes, I will have additional resources on the scene and your employees can return to work.”

Councilwoman Katrina Wilson thanked Knowles for the explanation regarding two fire companies at an alarm, pointing out that the fire company saved her brother’s life when his heart stopped at the age of 55, stating that she wanted to do whatever she could to be sure the company was fully funded and staffed. Knowles also explained that the location of the firehouse was a problem due to the heavy traffic near Route 113. He also explained that the company had outgrown the firehouse as trucks and engines were much larger than they were when the building was built. Knowles stated that it would be helpful to have a substation close to the new hospital but that would need to be studied to be sure that location would still be adequate in 10 to 20 years. Council also discussed reaching out to Milford School District about creating EMT/firefighter curriculums in an effort to expand volunteerism as the students could intern at the fire station.

“One other topic to discuss is the siren itself,” City Manager Mark Whitfield said. “I have heard from many people about the disruption the siren causes in its current downtown location, both from festivals to the theater and then just daily life. I think one of the things we talked about is that many of the firemen actually live outside of town and, the company has asked for more sirens to be activated. The primary reason for having the siren is that you have volunteers that are on the road with their four way flashers or blue lights on trying to get to the firehall. That it’s important to warn people they are on the road trying to make a response. It seems to me that the siren in the middle of town is really not conducive to that overall goal in terms of alerting motorists.”

Councilman Todd Culotta stated that because he grew up next to the fire siren, it did not bother him but his wife hated it. He also stated he got a lot of complaints from his neighbors. He saw a need for the siren but agreed that the center of town was probably not the best place for it to be located.

“I’m in complete sympathy with the people who have to deal with this,” Knowles said. “For us, it’s the way we were brought up and raised, we relied on that siren. WE still rely on on that siren for our members. I understand if I was not in the fire department, I would probably be discussing it with the city manager, too. We are in agreement to move toward some alternative locations and solutions outside of town, but we need to make it clear that we do rely on that siren.”

Councilman Culotta asked if it were true that the fire company was required to have two adequate forms of communication for alarms and Knowles confirmed that was true.

“We must have two adequate forms of communication, the fire siren being one,” Knowles said. “One thing is guaranteed to happen. When there’s a fire alarm, as long as that fire siren is operational, it will go off. There will not be a time when it will not go off due to a malfunction of the call board. It’s within the wiring of the box of that siren. Yes, we do need two forms of communication built in and we do rely on the fire siren. We have phones with apps but it is not as reliable.”