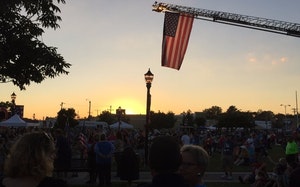 At their regular meeting, Milford City Council approved a request from the Chamber of Commerce for Greater Milford (CCGM)  for an alcohol waiver for Bicentennial Park, planned for Sept. 18, 2021. This will be the 20th anniversary of the festival as it was cancelled for 2020 due to the COVID pandemic.

Jo Schmeiser, Executive Director of the CCGM, explained that all alcohol would be contained in a gated, closed-in area of the Red, White and Brew Garden and that there would not be alcohol all over the park. A letter presented to council by Dorey explained that there would be a fenced-in area with a view of the stage. Volunteers will check identification and handstamp anyone over 21 to allow them to purchase and consume alcohol within the gated area. No alcohol can be removed from the fenced area. It is family-friendly, so all ages are permitted inside the fence where families can sit in chairs provided or use their own to view the bands and fireworks.

Councilman Jason James commended the committee, stating that the last event was well-monitored and well-maintained. He did not notice anyone getting out of hand and no alcohol leaving the area.

“Last year, our funding was approved at $30,000,” Schmeiser said. “We have held events recently for the chamber and all have been well-attended, whether indoor or outdoor. We keep it safe for everyone and we plan to do the same with the festival.” CCGM plans to use $5,000 of the funding for Kids Corner, $5,000 for advertising, $10,000 for entertainment, $2,000 for crossing guards and security, $1,000 for signage for health and safety protocols and $7,000 towards fireworks.

City Manager Mark Whitfield stated that there was funding the budget under Community Festivals to grant the financial support. Councilman James stated that he felt the community desperately needed this festival.

“Not to be a Negative Nelly, but what happens if you can’t hold this event?” Councilman Andy Fulton said. “What if the numbers go way up again and they shut us down?”

Dorey stated that CCGM planned to work very closely with the Department of Health to be sure that strict protocols were in place if they were necessary.

“We are coming up with a plan for the way things are right now,” Dorey said. “Because it is outdoors, we are hoping we will be able to spread out, but if the numbers get bad enough and we need to cancel the festival, that is what we will do based on the Governor’s recommendations.” Councilman Todd Culotta asked what recourse there was with the funding should the festival be cancelled.

“Most of the vendors we work with are local,” Dorey said. “I think they will work with us. The fireworks vendor allowed us to postpone last year, and our entertainment is local so I think we should be able to work it out with them.” City Solicitor David Rutt suggested that any contract that required a deposit include a clause that should the event be cancelled due to COVID, the deposit would be used for next year or refunded.

Schmeiser explained that if they used any of the funding for advertising and those ads ran prior to the cancellation, the money would be gone.

“We do get some funding from Delaware Tourism, but not much,” Schmeiser said. “We do try to do a lot of advertising as a trade which meant we didn’t spend any money, but we start advertising for this festival in June.” Dorey pointed out that only $5,000 of the $30,000 was allocated for advertising, so if they did have to cancel, the amount lost would not be significant.

Council unanimously approved both the funding request and the alcohol waiver for the festival.