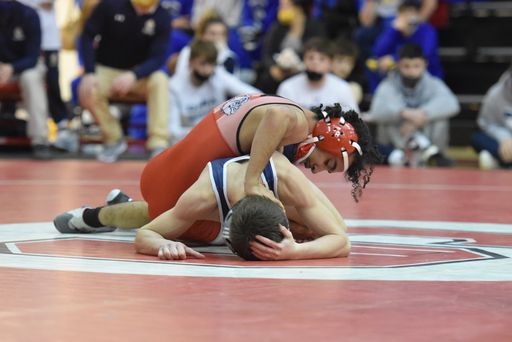 Laurel’s Brennan Harrington (top) looks for a way to turn DMA’s Gavin Mundy in their 106 pound bout. Mundy went on to win by pin in 432. Photo by Ben Fulton

Smyrna – Delaware Military head coach L.A. Collier has sat in the corner of the DIAA state dual meet finals, but he was head coach at St. Mark’s. Saturday was his first time as head coach of the Seahawks.

“I think this win gives us the energy to move on, this is pretty big for our program. It’s the first time in school history we made the finals,” Collier said.

But it was Laurel that got the momentum going to start the match when Stanley Pete pinned Alyssa Mahan in 2:43 at 120 pounds. Elijah Niblett won a 3-2 decision over Edward Orth at 126 pounds as the Bulldogs jumped out to a 9-0 lead.

The Seahawks took their first lead of the back and forth match when Daniel Williams won an 11-3 major decision over Kyler Weaver at 132 pounds followed by Dylan Delcollo recording a pin over Nathan Austin in 5:30 at 138 pounds giving Delaware Military Academy a 10-9 lead.

“We really always rely on the big guys like Luke Spoor who came through with some bonus, but then kids like Delcollo roll through and get a stick Hayden was kind of getting it put on him, but he comes out on top. It was just not giving up and keep on going,” Collier said.

Delcollo was trailing 11-3 and Austin had him on his back before he was able to get a reversal and the pin for the Seahawks.

The Bulldogs Xavier Limehouse won an 8-2 decision at 145 pounds before Delaware Military answered with a 14-2 major decision by Luke Spoor at 152 and a pin by Drew Simpson at 160. Steven Novack won a close 3-2 decision over Jett Furbush at 170 as the Seahawks regained the lead 23-13.

Travis Rife stopped the string of victories by Delaware Military, winning an 8-3 decision over Malcolm Roy at 182 pounds. The Seahawks Hayden Moaney trailed 6-1 before reversing James Johnson and recording a pin in 1:06 at 195 pounds to start another run of victories for Delaware Military.

“We have another one to go and we are going to give it everything we got, that’s all we can do,” Collier said.