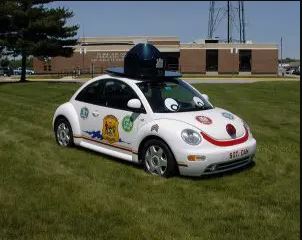 Sgt. Dan has retired from his safety program duties, and State Troopers want fairgoers to help name his replacement.

After wearing out two Volkswagen Beetles as safety education vehicles, the Delaware State Police fleet has been joined by a turbo-charged 2019 Beetle that needs a name.

You can submit your suggestion at the Delaware State Fair, which starts today.

The new addition follows in the proud tradition of two of its cousins, named Trooper Dan and Sergeant Dan.

The State Police in 1974 converted a VW Beetle into a safety beetle with his own campaign hat, red light for a nose and eyeballs on the windshield wipers. He served throughout the 1970s at school programs, a well as highway and bicycle safety programs.

A two-legged trooper would converse with students through a hidden speaker in the front of the vehicle. Trooper Dan would acknowledge students by shifting his eyes or flashing his nose.

After Trooper Dan retired, a 1999 VW Beetle was promoted and named Sgt. Dan, serving from late 1990s and into the early 2000s. He recently retired.

The new Beetle will officially be a member of the 96th Delaware State Police Recruit Class, which is slated to graduate from the Police Academy in September.

Troopers will be on hand from 5 p.m. to 9 p.m. at the State Fair in Harrington with ballots so fairgoers can submit name suggestions.

The Beetle, along with a modern Chevrolet Tahoe, will be located between the Delaware and Dover buildings.