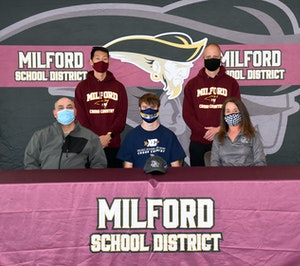 Every athlete has a story, every athlete must overcome some form of adversity in one way or another. Soon-to-be Milford graduate Connor Sylvester is one such athlete. It has been a long road for Sylvester, as his primary battle came from inside himself as he battled Attention Deficit Disorder. As with any challenge, Sylvester did not do it alone. With the support of parents, coaches and friends he has become a quality runner, and more importantly, a quality student. Speaking with his mother Kelly, she demonstrated the expected pride a mother feels for any of her children when they succeed. “It has been a long road for Connor, it took us a while for us to diagnose exactly what the problem was. We tried so many medications that didn’t work, but with a lot of focus we were able to get his grades in order and that allowed him to be able to compete in sports. He went from barely able to pass, to an A student, who has now found a way to excel without the aid of medication. I can’t begin to explain to you how proud I am of him.”

While Connor always felt that there was an athlete inside of him, he really didn’t know what his sport should be. He tried baseball, soccer and even considered football for a bit, before settling on running. It turned out to be the perfect choice for him. Competing in both cross country as well as his favorite event, the 800 in track, Connor has seen a constant rise up the standings as his speed and endurance increased. This past fall he was a captain on the cross-country team, finishing in the top 10 in the Kent County Championships. Connor also garnered All-Conference honors too.

Speaking with his cross-country coach Lance Skinner, he believes that the best may still be ahead for Sylvester. “I have coached Connor since he was a freshman here at Milford. During that time, he has just continued to improve. What’s more important is his love of running, that is something you can’t teach. That is how he went from the middle of the pack to a captain and leader on this team. It really speaks to how much time and dedication he has put into running,” Skinner said. 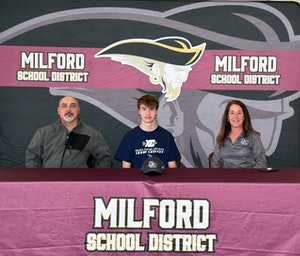 When speaking with Sylvester and Skinner, it was clear that there was one story that stood out in both their minds. One time at a cross-country meet, Connor didn’t finish. More importantly, he was nowhere to be found. A search party was put together and after a half an hour, still no Connor. It all turned out well however when Sylvester was found safely, sitting on the bus alone. With a bit of a mischievous chuckle Sylvester recalled the incident. “I got sick in the middle of the race and knew I couldn’t finish. I figured the best place for me was on the bus. Obviously, I probably should have told someone, but it was a mistake I learned from. Coach Skinner explained it all to me and I understood, that’s what I try and do, learn from my mistakes.”

The bus adventure aside, Sylvester finds great joy in his running and is looking forward to college. He will be studying Business Marketing at Goldey-Beacom, with plans to go into the business world or possibly someday start his own company. As for running, it will always be a place in which he has increasingly found great joy and solace. “When I’m running it really frees up my mind, to the point where all the challenges of life just fade away. The result is I’m really able to focus on the rest of my life, which really makes me a better person overall.”

After last year’s track and field season was canceled, Sylvester is ready for the upcoming year. “Oh, I’m ready to go for sure. I am really looking forward to one last season at Milford,” he concluded.