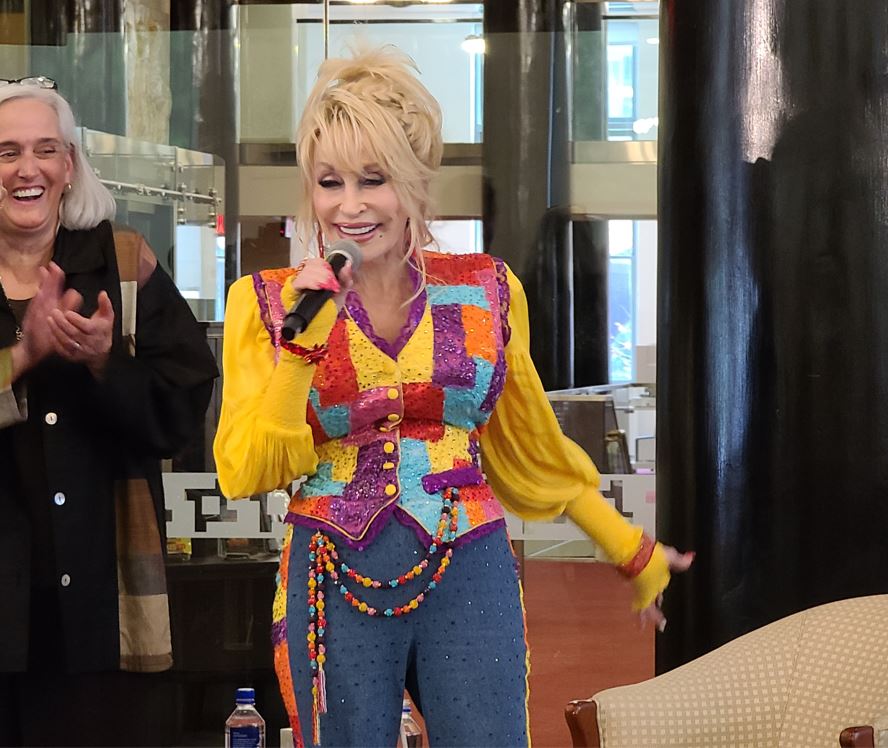 Dolly Parton talks to a crowd of politicians and librarians Thursday at the Wilmington Library.

Delaware politicians and librarians told superstar Dolly Parton Thursday that they will always love her and her Imagination Library program, which sends one free book each month to 21,515 state children.

During an invitation-only program at the Wilmington Public Library, the state officially thanked Parton for including it in her program.

Gov. Jack Carney and First Lady Tracey Quillen Carney interviewed Parton on stage before she sang “Try,” a song about always trying to make your dreams come true, and “Coat of Many Colors,” a song that she turned into a children’s book.

In between, Parton presented the library with an autographed copy of “Coat of Many Colors.” Her inscription said, “This book belongs to you, Delaware. Dolly Parton.”

The Carneys presented her with a small stuffed blue hen, the mascot of the Delaware Libraries early reading program, and a box of Dolle’s salt water taffy from Rehoboth Beach.

Carney joked that just for today, they were changing the spelling to Dolly’s.

“That’s kind of like our Goo Goo Clusters out of Nashville, right,” she said. “I’m probably going to rip out all my crowns.”

Educators and libraries are wild about the Imagination Library program because one of the keys to success in school is being familiar with language. Parents reading books to children from birth helps them form a vocabulary and pick up on verbal and visual clues and the ways that letters sound. Learning to read is built on that.

Family members can sign children up for the Imagination Library at any Delaware library. Birth hospitals sign up newborns before they even leave for home, the First Lady said.

Dolly Parton performed her songs “Try” and “Coat of Many Colors,” a hit she turned into a children’s book.

State Librarian Annie Norman said after the event that the 21,515 Delaware children ages newborn to 5 who are enrolled represent 38% of those who could be getting the books. About 55,000 children are eligible, and the Imagination Library program would like to see the percentage of those enrolled rise to 60%.

The state also has 5,000 children who have aged out of the program, Norman said.

She said that each time the program is prominently mentioned — in the State of the State address, for example — more families sign up.

“Now I’m waiting to see what this bump is going to be with Dolly Parton here,” Norman said. “It could be exponential.”

Parton said her own father, Lee, inspired her to start the library. He was a hard-working farmer who raised 12 kids.

“My dad didn’t get a chance to go to school and couldn’t read or write and so many people in the mountains didn’t get too close,” she said. “The school houses were usually a long ways off and they had a whole bunch of kids, so all kids just have to go work in the field and do whatever they could to try to help support the rest of the family. ”

She was always aware that he was bothered by not being able to read, and she came up with the idea of helping children learn to read by sending them a book every month to help instill a love of reading.

“I thought maybe it would maybe go to a county or two over,” she said. “I never imagined that it could be all that it has become, but my dad got to live long enough to see it.”

Parton said that the family bonding that takes place when books are read is precious to her.

She said the program sends out 2 million books a year and expects in early 2023 to hit the 200 million mark of books mailed out, which drew lots of whoops from the crowd.

She thanked Delaware for making the Imagination Library program a statewide one.

“It’s just a great honor for you to take this on with us,” she said.

“It’s a little easier in our state to take it statewide,” Carney joked.

First Lady Tracey Carney laughs as Dolly Parton talks during a state thank you for her Imagination LIbrary project.

Parton herself has just released a mystery thriller, “Run, Rose, Run,” written with James Patterson that’s already slated to be turned into a movie starring Parton and produced by actress Reese Witherspoon.

Asked what she’ll do next, Parton said she gets new dreams every day. Right now, she’s working on a Christmas musical that will be filmed at her Dollywood theme park in Pigeon Forge, Tennessee.

Also prompted by the First Lady, Parton said she hopes to be remembered for everything she does, including her music.

She said she wanted to be rich and famous, partly so she could help other people.

John Micklos, whose book “One Leaf, Two Leaves: Count With Me!” is included in the Imagination Library selections, attended Thursday’s event at the invitation of Norman.

He said on Facebook Thursday that his 2021 picture book “Raindrops to Rainbow,” illustrated by Charlene Chua, is an Imagination Library selection for 2022.

It was exciting to see Parton in Delaware, he said.

“It’s great that we’re able to get her,” he said. “I know how busy she is and how much she travels. So it’s great that she can be in Delaware to promote the program. Delaware is one of the handful of states that does it statewide, so it is a big deal.”