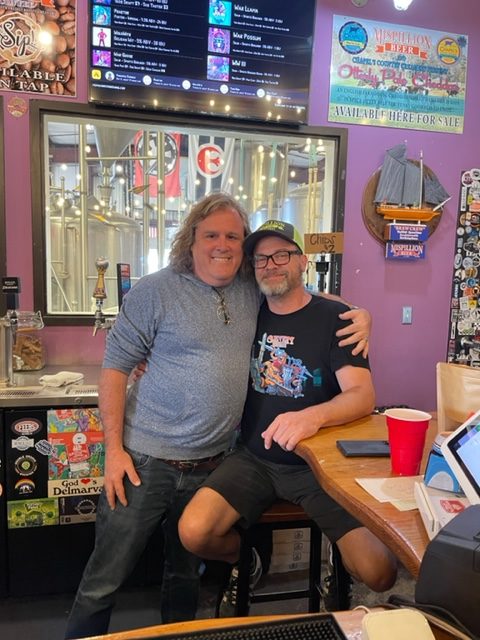 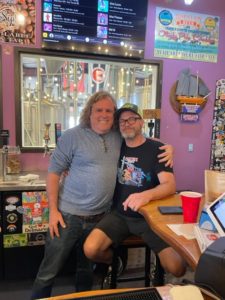 After 25 years in education, Dr. Kevin DiCostanzo, a history teacher at Milford High School, has decided to leave the classroom and begin a new career at Mispillion River Brewing Company as their Events and Concessions Manager. DiCostanzo explained that this has taken his career full circle.

“Strangely enough, I was a bartender first, back in 1988 and my eighth grade science teacher used to come in and patron the bar that I was working at in Pennsylvania,” DiCostanzo said. “He had said to me when I was working for Olan Mills selling portraits, “Well, why don’t you go into education. It seems like you’d be pretty good at it.” At the time, I was just married, my oldest daughter was just a baby. I had left Millersville University. And at one point in time, I think it was probably around 1993, so I had to make a decision either to go back and finish a degree or to allow those credits just to go away. I had 90 something, but I changed my major twice. I was a computer science major first, then a finance major. Then when the stock market broke in 1987- 1988, I left school When Mr. Simms, this eighth grade science teacher, was coming into the bar where I worked and told me “Well, yeah, you’ve really got to think about doing education”. So, I started thinking about it a bit. I had to start thinking about what I was going to do with the credits, and I thought, well, you know, ‘m pretty good at history. And I liked working with, at the time, the teenage kids that I was working with, back in Millersville. So, it was okay, let’s do that. I graduated in 1997 from Millersville. And Milford was the first school that picked me up and I took the job and been there ever since.”

DiCostanzo has seen education change considerably over the past 25 years and, since the pandemic, things have gotten “trickier.” He explained that teachers are trying to make sure students get through the system and keep as many of them in school as they can. He admitted he will miss working with students but believes administrations are trying to transition into this new normal. Since the pandemic, DiCostanzo noticed it was more difficult to get students motivated, something that was not really an issue when he started in 1997. He stated that, back then, students understood what they were in school for, knew what they had to do and what would happen if they did not turn work in properly. Although there were students that would not do the work they should have back then, it seems as if in recent years there are more of those students.

“Well, it’s kind of like I’m going backwards actually, because I came from here to begin with. And, you know, the best training I ever had for working with students was actually working as a bartender in hospitality,” DiCostanzo said when asked how difficult the transition from education to hospitality would be. “You have to learn how to handle the public, keep them happy. And at the same time, you have certain rules that have to be enforced, and there are certain things that you’re trying to accomplish. And it was pretty much the same with me with that and education.”

DiCostanzo joked that he actually created his own title when he took the job at Mispillion Brewing and that he started as a customer there initially.

“So, I got to know Eric. I know that the that the brewery has been open five days more than my marriage. My anniversary with my wife is on November 18, 2013, and they opened on November 13. So, over the years, I got to know Eric pretty well, and he just kind of brought me in as a volunteer doing canning work in the back and then I picked up some bartending shifts here and there,” DiCostanzo said. “I’ve been writing trivia here since 2018. And then there were a couple of shifts that came up and he asked me if I wanted those, and I took those. The more I started thinking about it, that me coming in here to try to manage the tap room as a full time thing was something I was really interested in doing so since then, and it gives us really goes back to April, where I’ve really been putting a lot of effort into it. I have bands scheduled from now until the second week in December. I’m trying to have food trucks here every Friday and Saturday night as well. It’s funny because like when we were talking about it, I told him, I came up with the slogan “Mispillion River Brewing as a premier live music venue for Milford,“ and I just thought. if you say it, enough, people will believe it and so far it seems to be kind of working so I’m hearing a lot from you know, people saying that they’re really happy with the way things are going here entertainment wise on the weekend. So I’m, I’m pleased to be making the transition. I mean, I’ll miss school to a degree and who knows I may even sub here and there. Yeah. It’s funny because you know, people ask me when I’m retiring and I’m not really retiring. I’m just leaving education and going into full time into hospitality.”

When he worked as a bartender before becoming a teacher, DiCostanzo said he did do some event planning and bar management. He stated that his title sounds fancy but he his duties are basically the same as a taproom manager.

“Eric’s number one thing really is his strength is expanding the market in the field, and while he’s a really good bartender, he wants me to kind of come in here and take this stuff over, so he doesn’t have to worry about that end,” DiCostanzo said. “Like, on Thursdays, we didn’t have much going on, so he gave me Thursdays. Initially, other than the Tuesdays I was doing the trivia. I added music bingo on Thursday and that just came up when a customer asked if we ever did it. I took a look at it and did some research and then put it together for here and it’s been okay. No complaints. But yeah, now it’s like right now I have a couple of days open in June I have to figure out. I’m taking care of all the social media at this point for the brewery. I’m doing the scheduling of the bartenders. I have hired bartenders. Eric’s kind of like backing off and kind of like “hey, here you go.” It has been interesting, and I was not surprised, but it certainly shows his faith in my ability that I can bring something here.”

One of the events DiCostanzo has planned is his “retirement” celebration. For several months, he has posted on is personal social media teasers about where, when and what the celebration will be. Recently, he announced the event will be held on June 18 at the brewery. Chapel Street Junction will be the live entertainment and there will be food trucks.

“We know Scott and Tammy of Chapel Street Junction because they are part owners of the brewery,” DiCostanzo said. “I am looking at like 200 people who say they are going. This started as a one-shot thing for me and now that I am working to bring more people into the brewery, we may make this an annual event.”

When asked what the most difficult part of shifting to this new career would be, DiCostanzo stated he really did not think it would be difficult.

“As a classroom teacher, it is dealing with the things that we deal with from day to day. You know, environment and everything else and we know everybody’s doing the best they possibly can but it’s just so tricky right now,” DiCostanzo said. “I am leaving a more stressful environment. In here, I’ve got to know the vast majority of customers that come in here that are super helpful. I am just here to coordinate and make sure that they are enjoying themselves while they’re there. So, I’m going from mid-stress to no stress. I mean, other than the occasional cancellation or something that’s the worst that it gets in this job.”

DiCostanzo’s retirement celebration will be held on June 18. The celebration begins at noon at Mispillion River Brewing, located at 255 Mullet Run in Milford.