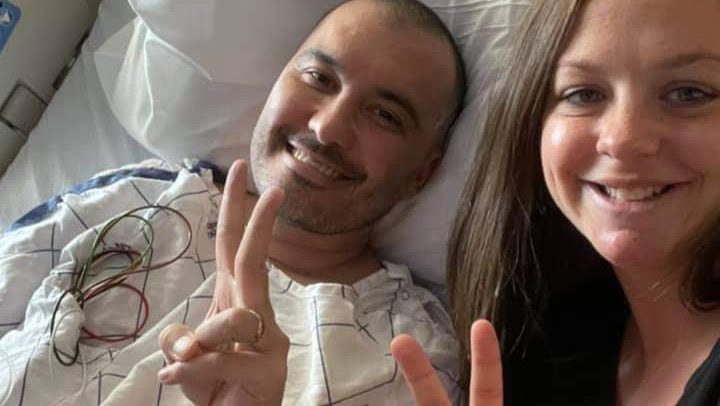 Todd and Lauren French continue to be optimistic about a new heart as friends rally around them. (Photo courtesy of GoFundMe)

Todd and Lauren French are familiar faces in the Milford community. Both teachers, the two have touched many lives in their classrooms as well as on the soccer field. Todd served as head soccer coach in Milford while both French’s helped with “Girls on the Run.” However, today, the couple is facing significant medical obstacles, leading friends to create a GoFundMe to help support their growing family.

“Many of you know Todd and Lauren French and have had your life touched by them in some way,” the GoFundMe, created by the Friends of Todd and Lauren, reads. “Maybe you grew up with them in Milford or went to school with Lauren at UD or Todd at Eastern (or one of the other 10 schools Todd has a degree from). Maybe your son or daughter was lucky enough to be taught by Todd or Lauren or coached by them in soccer or Girl’s on the Run. However, you know them, you know they are the kindest, most caring, compassionate and dedicated individuals and that they make this town, our lives and this world a brighter and better place.”

Seven years ago, Todd was diagnosed with cardiac sarcoidosis, a rare inflammatory disease that can impact any organ, but is especially dangerous in the heart. The disease causes immune cells to form granulomas in the heart, leading to arrhythmia and potential heart failure. A device that acts as a pacemaker and defibrillator was implanted in Todd’s heart to try to keep his heart beating in a normal rhythm. He has also undergone ablations where doctors burn parts of the heart to try to force it into a normal rhythm. This has led to many helicopter rides to Penn Hospital, long stays in the hospital, many of them alone due to COVID. Recently, Todd was placed on the national transplant list as a Status 2 patient which normally means he could have a new heart within one or two months. Until a heart is found, however, he must remain at Penn Hospital.

“In late October, the French’s were told that there were two hearts available,” the GoFundMe reads. “The team passed on one only to discover that the second one was unacceptable. They had barely enough time to process that information when Lauren gave birth to their second child, Penelope Rose “Penny” French who was born on October 20. Penny met her big brother, Teddy, a few days later while Todd watched via Facetime.”

In an effort to support this growing family, friends are trying to raise $100,000 to take some of the burden from Lauren while Todd remains in the hospital. Several businesses have contributed to the fundraiser, including Baked on Eighth, the Nashville bakery owned by Adam and Leah Carmean as well as Radka’s Boutique in Lewes, owned by Chelsea Carmean. Currently, the group has raised almost $41,000.

“Waiting is getting tough, and we are all growing anxious,” Lauren posted on social media on November 7. “Two calls for hearts that did not pan out in two weeks has been a lot on our spirits. One doctor let Todd know that it is extremely rare to occur. Praying the next heart is the one. Now for the good stuff, Penny and Todd met in person today. Moments like these are helping us push through.”

On November 12, Lauren provided an update on the GoFundMe page.

“Third time’s the charm. Todd’s heart transplant is complete,” the page read. “We received a call around 6 AM yesterday (11/10) that a heart was available. Penny and I went up and spent the day with Todd while we waited. Todd told me that this was the heart. He said ‘God knows I can’t go another day with the heart I have.’ He finally headed to the OR around 10 PM and called at 10:30 to let us know all was good and they were getting started. Todd’s parents stayed up at Penn through the night. Around 3 AM, we got an update that the heart is functioning well and the procedure went smoothly. Todd’s parents were able to see him in recover at 5:30 AM and he is stable. Thank you for all the prayers and love. Moving forward, we pray that Todd begins to heal and we pray that over the following days, weeks and months, his body accepts th heart and recover is smooth. Teddy, Penny and I can’t wait for dad to be home.”

The fundraising site went on to say that the doctors were able to remove the breathing tube, Todd was able to take a few sips of water and answer questions about the children. He was able to sit in a chair with some pain, but nothing beyond what is to be expected after such a surgery. As he continues in a positive direction with his recovery, the family hopes to see Todd moved to a step down unit from the ICU.

Anyone interested in donating to the GoFundMe can do so by visiting https://gofundme.com/f/for-todd-lauren.