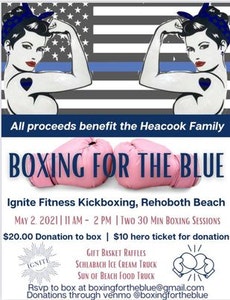 A fundraiser was held for Corporal Keith Heacook, a 22-year veteran of the Delmar Police Department after he was brutally beaten by an assailant in the Yorkshire Estates community on Sunday, April 25. Randon D. Wilkerson was initially charged with attempted murder, assault and other offenses in connection with the attack, but those charges may change since Cpl. Heacock passed away from his injuries on Wednesday.

“We had many raffle items to help raise funds,” Amanda Webb, one of the organizers of the event, said. “All proceeds will be to benefit Officer Heacook and his family. We decided to hold the fundraiser because we feel that his family needs more support than ever.”

Webb stated that this fundraiser is very dear to her family as her husband is Senior Corporal Timothy “TJ” Webb who was shot during an apprehension attempt in December.

“We wanted to find a way to give back and support Officer Heacook’s family like we were,” Webb said. “We are a strong community that uplifts and supports each other during difficult times.”

For those who could not attend but want to provide assistance,  Hero tickets are available for $10 through Venmo using @boxingfortheblue.

“It’s been a hard time to be a law enforcement family during these times and I know it meant the world to us to see the outpouring of support,” Webb said. “We wanted to lift up the Heacock family as much as we can during this time. It’s also a very important value we have to ignite to give back to our community.”

Cpl. Heacook passed away on Wednesday at Baltimore’s Shock Trauma Center. In addition to Heacock, an elderly couple, Steve and Judy Franklin, were also attacked. Mrs. Franklin was transported to Shock Trauma as well.