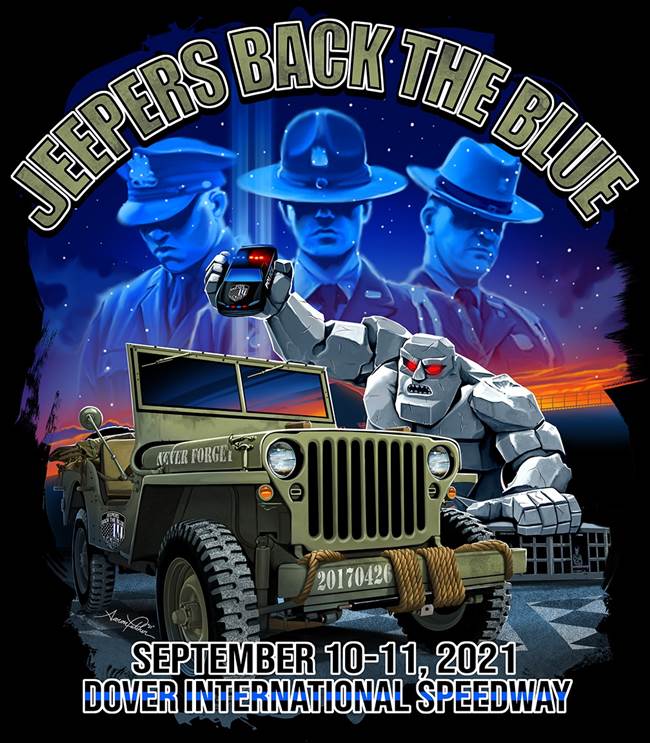 After the death of Corporal Stephen Ballard of the Delaware State Police on April 26, 2017, Jeff Lehnert wanted to do something as a tribute to the fallen officer. His desire to do something led to the creation of Jeepers Back the Blue Foundation.

“At the time, I was running a Jeep club, so I organized a Jeep convoy to his troop,” Lehnert said. “We had about 75 Jeeps show up and we collected over $1,000 that we donated to the Concerns of Police Survivors. The following year, I wanted to do it again, but wanted to make it a celebration of our men and women in blue, ending with a law enforcement appreciation event. The second year, we had 709 Jeeps from 12 states come for a 35-mile convoy from Dover International Speedway to Delaware Park. That year, we chose three Delaware Police Officers that had passed away while on active duty, but not in the line of duty, to donate funds. They all had school aged children that we wanted to help out and we collected over $24,000.”

Jeepers Back the Blue Jamboree

After the second event, Lehnert knew what law enforcement meant to the Jeep community. It was then that he decided to create Jeepers Back the Blue Foundation. This allowed transparency with any funds raised and created a way to help as many people as possible.

“We decided that taking that many Jeeps on the road the second year was not a good idea, so we found a home at the Dover International Speedway for the two events we have had since,” Lehnert said. “The event is the Jeepers Back the Blue Jamboree and we have raised over $200,000 that has gone to police families in 12 states.”

Lehnert is married with three daughters and has been a probation/parole officer for the State of Delaware for almost 24 years. He feels this foundation is a way to show his law enforcement family how much support they have from the Jeep community.

“There has been a change over the past few years of how the media portrays LEO’s and I look at this as an opportunity for me to bridge that gap,” Lehnert said. “We have helped LEO families from every walk of life with the common denominator being that they all proudly served their communities until the very end. The thank I get from police officers all over the country that see how much they are appreciated is the most rewarding thing for me. I think we have created more than just a foundation, but a movement that people are extremely proud to be part of.”

K-9 demonstration at Jeepers Back the Blue Jamboree

The Jeepers Back the Blue Jamboree is planned for September 10 and 11 at Dover Downs International Speedway. Jeeps get the chance to drive on the track, there are police displays and demos, live music, food trucks and raffle prizes.

“We also have an emotional Honor Guard Ceremony complete with the Delaware State Police Pipes and Drums,” Lehnert said. “Pre-registration is only open to Jeeps, but anyone can come out, pay a daily fee and be part of a great cause.”

Anyone interested in the event can learn more at www.jeepersbacktheblue.org. There is also an online store were those interested can purchase merchandise.