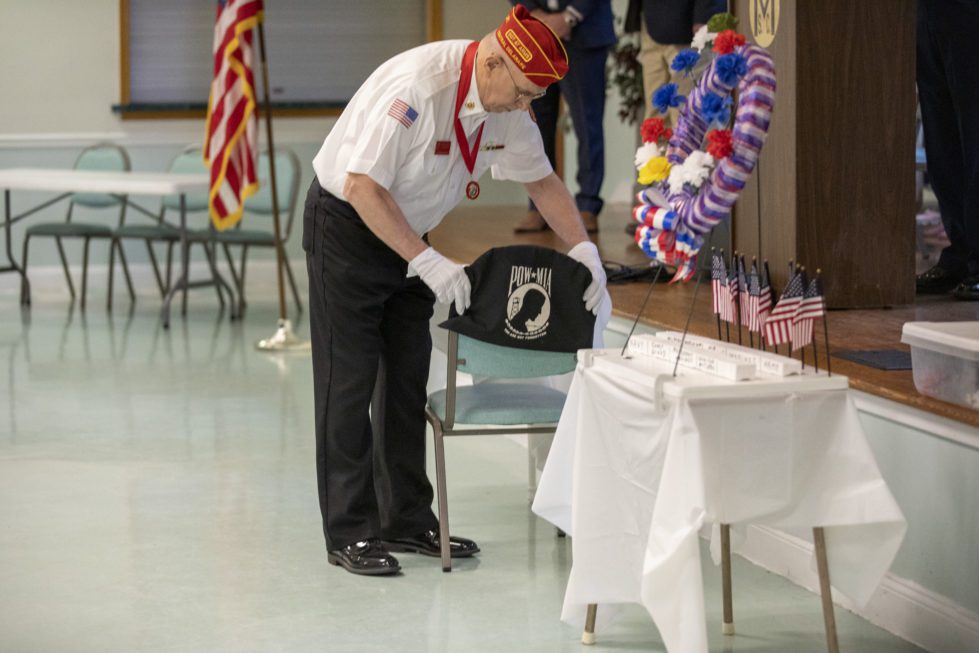 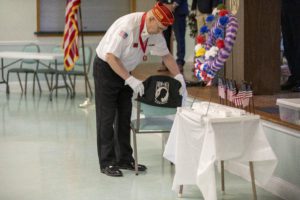 Milford remembered the fallen at the Memorial Day Remembrance Ceremony

After a two year absence due to the COVID-19 pandemic, the annual Milford Memorial Day Remembrance was held on Monday, May 30 at the Milford Senior Center. The event features patriotic music, presentations honoring those who gave the ultimate sacrifice for freedom and remarks from military members and local dignitaries.

“Today is not a celebration. It is a remembrance of those that gave their all,” Charles Garrod, Chairman of the event, said. “Often during a speech on patriotic days like Memorial Day or Veteran’s Day, statistics are floated out about the total number of sacrifices over all the wars. I’m not comfortable with that. I cannot read about those numbers of military and civilian casualties without thinking of them as people. The so called numbers were someone’s parent or someone’s child. Thinking about that brings tears of sorrow but also tears of wonderful memories. And tears of loneliness that follows. And thank you all who are here today to participate honoring these great men and women.” 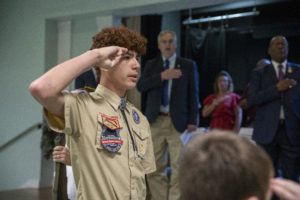 Garrod explained that the flag in front of the senior center was at half-mast as the United States Flag Code required that the flag be raised to full height on Memorial Day, then lowered to half-mast until noon when it would be raised to full-mast. The Milford Community Band was scheduled to appear at the event, but a large number of the group tested positive for COVID and they felt it better to cancel their appearance. Instead, solos were performed by Lorraine Leavel during the ceremony. After colors were presented by the VFW Color Guard along with two Boy Scout Troops, Dr. David Perdue opened the event with a prayer followed by Mayor Archie Campbell who welcomed everyone to the service. Representatives of each branch of the service placed flowers on a wreath honoring the fallen. The guest speaker for the event was Major General Michael Berry, Adjutant General of the Delaware National Guard.

“President John F. Kennedy is quoted as saying a nation reveals itself not only by the men it produces, but also by the men it honors. The man who remembers those words ring true today, and by all rights represent both men and women who wear the uniforms,” Major General Berry said. “Which leads me to reiterating the importance of what is taking place this morning. Not only here but all over our state and our nation. This ceremony is so much larger than a recognition of our fallen heroes. This ceremony is about creating a link between those members of our society who were not serving in uniform, and those that have answered the call. All of you are saying thank you for your service. And should the tragedy of last warrior occur, we the American people are here to fulfill our end of an unwritten contract. We the citizens of the United States of America are honoring a contract that we make every day as our young men and women raise their right hand and make an oath to serve and protect our citizens at home and abroad. This contract requires all of us to appreciate the risks inherent in the profession of arms. And to never forget their sacrifice especially when one of our warriors lose their lives while performing their duties.” 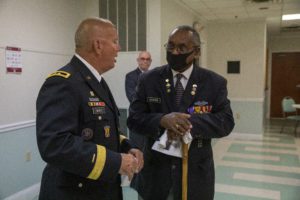 Major General Berry pointed out that currently, less than one half of one percent of the population serves in the Armed Forces and that percentage drops every day as the numbers of veterans in our population decrease.

“As we grow up in our society, we have an obligation to recognize just how fortunate we are to be citizens of the United States. Each of us benefits from all the freedoms guaranteed by the Constitution, as well as the political, social and financial advantages we enjoy every day,” Major General Berry said. “Each of us has a freedom of choice, of course within the law, to set our course for our future and practice the concept of self-determination. A lot of cliches can be used when describing our society. However, the bottom line is, we are all given the choice and the tools to be a productive member of society. And it’s an individual decision as to what path we take. I can spend hours talking about civic responsibility. However, what is important today is to recognize none of these freedoms would exist without the sacrifice of our veterans and our armed forces and their willingness to lay down their lives in support of America’s freedom. I base this statement on the fact that with the stability provided by our own forces in a world is full of constant strife and turmoil as a country is secure in its existence.”

Representative Charles Postles pointed out that although our democratic republic was not perfect, it was better than any other type of government that has existed. 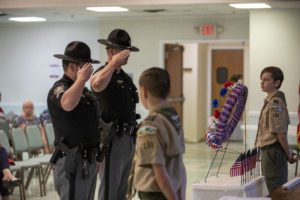 Milford Police Officers add to the Wreath of Remembrance

“General Berry referred to it that we have an obligation. Yes. In this country we have rights, we have privileges, we have freedom. We also have responsibilities and obligations and to those of us who remain, and I’m particularly pleased when where there’s a good representation of young people here today, that have the responsibility to see that this country continues,” Representative Postles said. “That we indeed strive for righteousness that we defend our liberty, and we always pursue justice. We need to remember these things because these are what those you are honoring gave their life for. I do thank everyone here that has given service and encourage you to remember we have come this far, but we have more yet to go. “

Representative Bryan Shupe used a quote from Ronald Reagan’s 1967 inaugural address as Governor of California, reminding everyone that freedom is a fragile thing and that it was never more than a generation away from extinction. He also stated that our freedoms are given to us by the heroes who serve and protect us every day. Representative Shupe remembered talking to a friend who was just back from deployment during Iraqi Freedom and recalling that he struggled with what to say to his friend, believing that his friend’s service was so much more important than what he was doing at home.

“He could see what I was getting at, what I was trying to get at and being more accustomed to my awkwardness than I was he said back to me that everyone has a purpose. So, some people know that it is their purpose to serve in the Armed Forces. And he does it so we’re freed up so that others back home can build their purpose, whatever that may be,” Representative Shupe said. “The sacrifices that our heroes have made to protect our unalienable rights need to be honored, not just for one day, but every single day we should celebrate and honor them by building strong communities and families here at home. We all have been given a path and a gift from the Almighty and pursuing them honors the legacy of the fallen soldier. That was the larger picture that my friend wanted me to understand that his sacrifice and the sacrifices of many that did not return home were in the name of freedom, were not in name alone. It was so that we at home could pursue our destiny and live lives that would honor the sacrifices that were being made.” 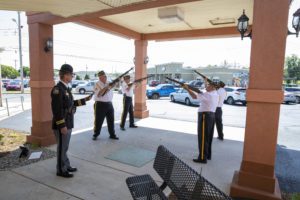 A 21 Gun Salute was fired in honor of the fallen

Representative Shupe challenged everyone to think about how they were living their life, to look deep inside and ask if they were living a life that gives justice to the sacrifices made by these heroes. He pointed out that people should ask if they are living for selflessness, living with courage and working for a higher purpose.

“We can honor the sacrifices by living a higher purpose once we begin to see something bigger than ourselves. This is a common thread we have with others,” Representative Shupe said. “We can achieve enormous accomplishments in living in this way. And the freedom of this type of life is immeasurable and it’s usually been through the ultimate test and is now protected by our heroes. Our heroes are students of great discipline and selflessness, courage and living through a higher purpose. Each of us can think of a loved one who’s served. Today, let’s leave here asking ourselves, how can we do the same in our daily lives to honor their sacrifices.”

After the speeches, there was a 21 Gun Salute outside the senior center and the creation of the POW/MIA Fallen Comrade Table. The words to “Taps” were read and Andy Seville played the song on trumpet. Charles Hammond, who served in the United States Marine, part of the committee that put together the remembrance and Chairman of the Board of the Milford Senior Center, requested Chaplain Mr. Positive, a local pastor, to present a special gift to the senior center. The chaplain presented a tri-folded flag in a case to the center as a thank you for allowing veterans to use the center. 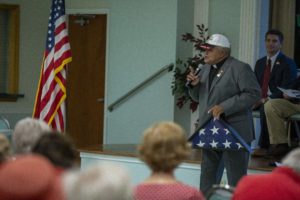 “You cannot buy this flag,” the chaplain said. “Someone in the Armed Forces must have died for me to be able to get this flag. The fact that the senior center honors its veterans every day needs to be acknowledged. I like looking out here and seeing these young faces. All of you out there who think you are not old, you will be. It is the young who we need to listen to right now. All of you young people, step outside that box and be the change. Us older folks need to let them do that and stop saying “but this is how we have always done it.” They are our future so let’s let them build that future.”

Garrod closed the ceremony with some final words.

“There have been a lot of changes in our country. Some are good. Some not so much. But it’s consistent. The spirit of being American has not changed. Some people may feel a little snarky when we say America is the greatest country in the world. I say that that as a whole we are a moral nation,” Garrod said. “We are patriotic. We have a strong work ethic. We believe in peace. We will stand up and fight to defend our country. We have developed wonderful alliances with many nations with friendships. We can always count on. But one thing we all know is that freedom isn’t free.”