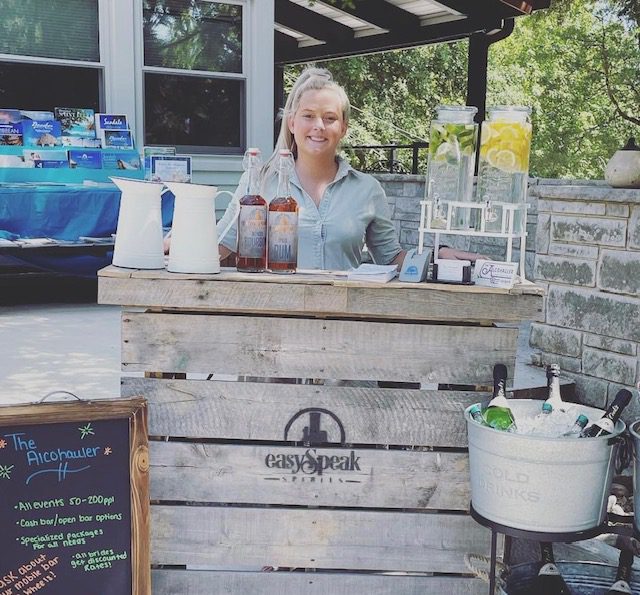 Marissa King is one of two women who own distilleries in Milford.

Two of the six Delaware distillery licenses are held in the Milford area, and both are owned by women, EasySpeak and Feebs Distilling.

“Before getting into distilling, I was in sales,” Stacey Fibelkorn, part-owner of Feebs Distilling, said. “Until recently, I was still working in sales, selling pest control products for Ehrlich. I sold real estate, worked for Comcast and, except for when I was in real estate, always had a quota to meet.”

When Fibelkorn met her now husband, Eric, he was distilling illegally in his backyard. She joked that one of their early dates involved her learning about the still he had on the patio around his pool.

Her family was from Virginia, so she had learned about moonshine while she was growing up, but had no idea how scientific the process was until she started helping Eric.

In 2017, Fibelkorn was diagnosed with cancer and underwent chemotherapy as well as radiation treatments.

“I told him that something had to change after that,” Fibelkorn said. “I did not look good in orange, so it was time to figure out how we can do this legally. We talked to an attorney who told us it would cost $25,000 to do the whole process. I went to the federal website and read through it, many, many times. I went to Eric and told him that I could do this.”

Marissa King, who co-owns EasySpeak with her husband, Zack, has a different history with distilling.

Before partnering in the brewpub and distillery, King worked in the medical field before leaving that to open a store in Florida. When Zack decided to open EasySpeak, that was the start of her involvement in the distilling business.

“I honestly have to give all the credit to my husband,” King said. “This was something he did before me that I just sort of stepped into with him.”

Stacey Fibelkorn of Feebs Distilling said her first date with her husband was learning about his still in the backyard.

Fibelkorn stated that she and her husband were told they could not make money creating their products the way they wanted, but she says that business is doing very well.

“We had no investors/ We are not an LLC. It is just us,” Fibelkorn said. “We have no one to answer to. We do things when we can afford them, and it is working for us. Eric does the majority of the distilling, but I have learned so much watching him. There is a true science to this, special temperatures, the mash, so much you need to know to do this right.”

King explained that she doesn’t have much input in the distilling business now.

“We have an amazing head distiller, Stephen,” King said. “He and Zack really just keep it handled back there. I focus on our other businesses and front of house at EasySpeak. I used to taste test a little, but now that’s out for me as well.

“But just because I am not involved back there anymore does not mean I never was. I used to spend more time in the distillery and still help them watch the stills from time to time.”

Both Fibelkorn and King advise other women who want to start a business, whether distilling or anything else, to just jump in and do it.

“Go into it with a good partner,” King said. “I couldn’t be more grateful to my husband and our work relationship. We are able to balance each other out very well, which is a necessity for growth. Also, make sure to keep it fun. If you hate what you do, your life will be miserable.”

“Do it,” she said. “Eric has been telling me to leave my job for a long time and work for Feebs. And I was recently able to do that. My expertise is in sales and I am successful because I have a never met a stranger personality. Starting your own business will be the most exhilarating, exciting, frustrating and tiring thing you will ever do in your life.”