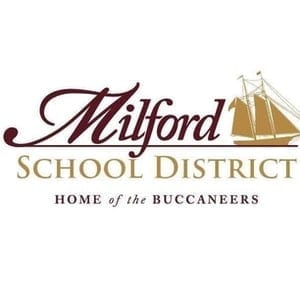 After a lengthy discussion at their regular meeting on June 21, Milford School District approved a new Board Member Code of Ethics policy. The policy outlines a wide range of ethics that each board member must follow after taking the oath of office.

The policy was drafted by Board Vice-President Rony Baltazar-Lopez with the assistance of Board Member Renate Wiley. After reading the policy, which includes statements such as reminders that that the board represents the community, recognition that the board has no legal authority individually outside the board and a commitment to uphold applicable laws and statutes, Baltazar-Lopez explained why he felt this policy was important.

“This policy is quite straightforward and it is quite simple,” Baltazar-Lopez said. “It replaces an outdated board duties policy enacted in 1986. It mentions no ethical beliefs that a board member should subscribe to. In my belief, it does not implicate any board member but, on the contrary, it explicitly establishes the morals and the values this board should hold for itself. I have no doubt all of you follow certain ethics in your lives, but this isn’t about an individual, it is about all of us collectively as the Board of Education who set the policies of the district. This past year, all of us have had to make difficult decisions for the entire Milford School District community. These decisions greatly impacted every student and family in Milford School District. Those decisions should be guided by ethics that we can all agree on and this is a policy to guide future board member when there is no clarity. In fact, we would not be the lone district that has an ethics policy. Of the 19 districts in Delaware, 15 districts have thorough and comprehensive ethics policies, including our neighboring districts like Lake Forest, Caesar Rodney, Cape Henlopen and Woodbridge. Some school districts go as far as requiring that board members subscribe to those beliefs when they first join the board.”

Baltazar-Lopez went on to point out that Delaware Code and the Department of Education only mention general duties for board members, not the ethics they should hold. After speaking, Baltazar-Lopez motioned to make the policy an action item since it had been read twice before. An action item would require the board to vote on the policy.

“Unfortunately, you have made this motion before we have a chance to discuss it at all,” President Jason Miller said. “I have a few questions and comments after reading it for what I guess is the third time. But the process we have is that there is a motion on the table.” The board voted five to two to move the agenda item to an action item with Kris Thompson and Jean Wylie casting no votes. Once it was determined a vote would occur, the board discussed the policy in detail.

“In the line that we should “make decisions based on the educational welfare of all children in the district,” it is followed by the statement “regardless of socioeconomic status,” Miller said. “Not that I take issue, but I just feel like “socioeconomic status” is unnecessary considering the previous statement is “educational welfare of all students.” I also find “be inclusive by ensuring that all goal setting, policy making, evaluation and governance is best for all students of the district” is also redundant to the previous statement as if you are doing one, you are most certainly doing the other. I also find that “welcome and encourage active participation by residents, organizations and the media in the district with respect to establishing policy on current building operations and proposed future development” confusing. Does this mean we are only interested in encouraging participation when it is involving policy related to building operations and future development? I would think that simply stating “encouraging active participation” would be more inclusive.”

“I don’t think any policy you create can create ethics in a person,” Board Member Kris Thompson said. “I don’t see a need for an ethical policy, especially one you cannot enforce. There are no repercussions if someone violates this policy. There is nothing we can do if someone violates it, so it is nothing more than a feel-good measure that we put on record. You either have an ethical person or you do not, and you can create whatever policy you want, but there is no recourse for us if a person violates it.”

Board Member David Vezmar asked if there were other policies that included penalties should they be violated. Thompson pointed out that the dress code policy outlined penalties if there was a violation as one example, stating there were many in place throughout district policies.

“As we know, Red Clay went through this,” Thompson said. “It is very difficult to create a policy and hold a board member responsible for it. That is why we take an oath when we take this position. You are entrusted by the public whether we were voted in or ran unopposed. Now, we are, as a board, trying to create a policy that we ourselves cannot enforce. That is my concern.”

Wiley stated that she did not see a problem with the policy as she felt it was good for the community to see things spelled out.

Baltazar-Lopez asked if teachers had a written ethics policy that they were required to follow. Jason Peel, Director of Human Resources and School Climate, explained teachers were provided information on minimum responsibilities expected of them when they were first hired and that there was policy in place regarding penalties should they break the law. There were also social media guidelines provided when a teacher was first hired, but the information was not renewed with the teacher annually. In some cases, if the teacher failed to meet those obligations, they could be reprimanded or terminated.

“The policy says to avoid being placed in a conflict of interest, and I think we really do need to look at that,” Wylie said. “How we approach ourselves when asking a question, we don’t want to be badgering or placing ourselves in a position where we think we know it all when we don’t. We have to remember to ask in a civil way. I agree we are supposed to have ethics. I understand, Renate, what you are saying about elections, but this policy has a lot of things.”

Miller stated that there was current legislation pending that would penalize or remove a board member, but that had not taken place yet. Wylie questioned who would be responsible for bringing any violations to the attention of the board member.

“This is not about enforceability,” Baltazar-Lopez said. “It’s not that you have to do it or get kicked out. There is no state law that says how to remove a board member. Even the governor cannot remove us. That is just written into code. The purpose behind this is the ethical standards, the minimum standards we should agree on.”

The policy passed with a vote of four to two with one abstaining. Baltazar-Lopez, Vezmar, Wiley and Wylie voted to approve the policy, Thompson and Scott Fitzgerald voted against the policy while Miller abstained. The entire policy can be read by visiting the District website.