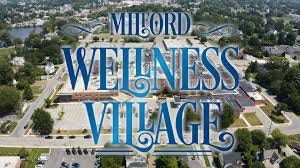 According to Lon Kieffer, Executive Director of Milford Wellness Village, one of the goals when Nationwide Healthcare System took over the former Milford Memorial Hospital was to fill gaps in healthcare in the Milford area. At a recent meeting, he explained that he was not the “brains” behind the village, attributing that to the owner of Nationwide, Meir Gelley and Rabbi Halberstam whose vision was taking formation at the Clarke Avenue location.

“We have 20 tenants on campus now and we truly do try and focus on services that otherwise would not be available,” Kieffer said. “And synergistic tenants create synergy on the campus. We’ve got two or three more that are in the process of moving in. And our big goal is to have an educational component and that is not a secret. We’ve talked about that openly. What I can’t talk about is who we’re talking to. Although I can acknowledge that it’s UD, Del State and DelTech. Whoever wants to partner with us, we are open to it. Milford is really an up and coming area in the eyes of the state as a whole, but also in academia. Colleges these days are having to get off their campuses. I just think between COVID and then DelState has gotten so much national attention because of affiliations with Biden. It’ll happen, we don’t know with who, but it’ll happen soon. And it’s a big goal of the town, as well.”

The latest organization to open in the Milford Wellness Village was PACE, which stands for Program of All Inclusive Care for the Elderly, which Kieffer described as “adult daycare on steroids.” The organization becomes the client’s medical provider, and they are able to coordinate care with other organizations within the village. Polaris, a 100-bed nursing home facility is also open in the Milford Wellness Village as well as their latest wing, the Spiritus Vent Unit. The former Milford Memorial ICU has been transformed into a specialized unit for patients that require ventilator care. Before the unit opened, patients had to travel to northern Delaware, Maryland or Pennsylvania. The two wings of the nursing home have a total of 86 beds and there are 14 in the ventilator unit. LaRed has also opened a location in the Milford Wellness Village, offering low-income medical services.

“What those businesses and services have in common is that they are all part of Nationwide Health Services. We also have a small program called We Care and those are the businesses that Nationwide Health Services. Mr. Gelley and Rabbi Halberstam operate under their umbrella. Everybody else is a tenant. And my role for them is you know, landlord, but I’m also outreach, public relations. And but I do not operate their businesses.”

Another unique organization located in the Milford Wellness Village, Kieffer explained, is Champions for Children’s Mental Health, the second smallest tenant by virtue of size, but probably the most prolific as far as media and public awareness of late because of Uvalde, Texas and other issues that are going on with mental health in the country. Kieffer stated that the organization was a mother who had children with mental health issues. She struggled 25 years ago ttrying to raise them when there were virtually no services for her. She dealt with confusion between autism and mental health as well as professionals who began to think she was the one with a problem, meaning she had to blaze a path of her own and mainstream her children. Kieffer explained that her children now speak nationally on this topic.

“This mother has gotten Medicaid reimbursement and they’re not nurses, are not social workers. It’s very rare to get Medicaid reimbursement without that medical designation, but they’ve created such a arsenal of resources for children’s mental health and I actually have a call later today. Senator Carper’s office specifically asked about them,” Kieffer said. “We just had a ribbon cutting with Delaware Assistive Technology Institute. They are a lending library and supportive of adaptive equipment that people might need to you know, be able to stay in their home and that’s been a great partnership and they bring with them.”

One program initially planned for the village was a dementia unit which will now not be placed there. Kieffer explained that after doing research, it was determined there was significant assistance in the area for dementia patients. However, one area that did have a gap was in drug and alcohol treatment which is why Banyan is now a tenant. One neighbor at the presentation expressed concern as they were unaware that a drug and alcohol treatment center was there until someone who worked in the village explained it to them. The neighbor was concerned as there are two daycares, Kidz Ink and Nurses N’ Kids located in the village. Kieffer stated that the treatment center was in a secure area of the building and, as far as he knew, there had been no issues with them being located in the Milford Wellness Village. When asked about housing for any students coming to the area or the possibility of an older adult housing facility, he stated that there were no plans at that time to construct those types of units but that they may revisit that in the future.

“We do have a gym which is located at Aquacare, a physical therapy facility,” Kieffer stated. “They do aquatic therapy although we do not have a pool onsite. The gym is open to the public and they do offer memberships. We also have the Village Café which is also open to the public.”

Kieffer suggested that anyone who wished to tour the facility should reach out to him or visit their website at www.milfordwellnessvillage.com.