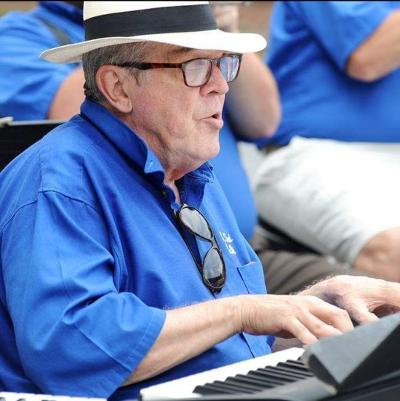 Dr. Gerald “Jerry” Thompson, a beloved educator and band director, passed away on Tuesday, September 28. The news devastated many in Milford who remember him leading the band at Milford High School for many years. Memories of Thompson were shared across social media platforms as the news spread that a Milford icon had passed away.

“I just learned tonight that my number one most favorite teacher and musical mentor, Dr. Jerry Thompson has died,” Mike Burris posted. “As I finish up a record down here in Austin, TX, I can’t help but give thanks to a guy that started me down this path. Jerry Thompson changed my life. That guy LOVED music and it was infectious. He made me believe that I could do it. I am so thankful I was able to see him last summer when he came out to a Dave and Mike gig and we could bust out some Travelling Willburys for him.”

Chris Kenton remembered that when he was a freshman in high school, he decided he wanted to be in the spring musical.

“I had absolutely no idea what song I’d sing for tryouts, so I just went on stage and sang ‘Take Me Out to the Ballgame’,” Kenton posted. My sophomore year, same song. As I walked on stage my senior year, Mr. Thompson, better known as just T, says “OK, Chris, I’m ready fro the best version of ‘Take Me Out to the Ballgame’ I have ever heard. I loved every minute working with that man. He was simply the best!”

Dr. Bob Sutcliffe who worked with Thompson at Milford School District kept in touch with him even after they both retired.

“He left a legacy of service to his country, his community, and most of all his students for whom he cared deeply,” Sutcliffe said. “He and I shared a birthday on the same day. One of us contacted the other almost every year. I’m pleased that we got to do that for the last time this year. Our final conversation was short but meaningful. Thanks, Dr. T., for everything:  your service in Vietnam, the Marching Bucs, the pit band of spring musicals, teaching kids to love music, giving some kids a refuge when needed, community band, American Legion and much, much more.”

Dr. Gerald Wayne Thompson was born in Dover, the youngest of the late Carroll and Emma Thompson’s three children. He graduated from Dover High school in 1965 and grew up on Forrest Street. It was his mother’s love of playing the organ that pushed her to start Thompson in piano lessons when he was young. It was not long before he negotiated a drum set and began playing with Dimensions, a band he performed with throughout high school.

After graduation, Thompson entered the United States Army and as his obituary reads, “attended multiple schools in order to learn skills he would need in a world most of us are fortunate not to know.” He served as an 82nd Airborne Ranger LRRP attached to the 173rd Infantry and Americal division in Vietnam. He considered his service in Vietnam a patriotic commitment and those who knew him understood his service “was more than any government should reasonably ask.”

On August 18, 1968, Thompson left Vietnam and met the love of his life, Colleen Ann Connell. He attended Wesley College and Delaware State University, pursuing his love of music. He convinced Colleen to move to Delaware and the couple began their lives in Milford. In 1972, Thompson took a position as a music teacher and band director, joking with his family he had found a “full time gig jamming with other musicians.” Two of his proudest moments were handing his daughters, Gretchen and Shannon, their high school diplomas.

As a promise to his mother, Thompson continued his education. He studied music in the summer months and earned a Master of Music from West Chester University in 1980. He earned his doctorate in education from the University of Maryland in 1998. After retiring from Milford School District, Thompson took a temporary position with North Caroline County High School in Denton and decided to stay longer.

His daughter, Shannon, created a love of softball in Thompson and he quickly learned the sport in order to coach Little League, soon becoming a travel ball parent. At North Caroline, where he was known as “Doc T,” he not only shared his love of music, but also coached JV softball, helping the team earn a state championship.

Thompson was very committed to Blue Hen VFW Post 6483 and was most proud when the post inducted to World War II nurses who were sisters. His love of music remained with him until the end and he was accomplished at many instruments, including drum, saxophone and keyboard. He put down his instruments for the last time in May 2021, something that his family said, “literally and figuratively broke his heart.”

He was preceded in death by his parents as well as his brother, Carroll Thompson, and his sister, Carolyn Dill as well as two companions, Duke and Dax. Thompson is survived by his wife, Colleen Ann Connell Thompson, his daughter, Gretchen and her husband, Steve Pikus along with his daughter Shannon and her husband, Matthew West. He is also survived by a niece Kathy Ragolia and nephew George Luff. He was extremely proud of his grandchildren, Dalton Pikus, Emma Rose Pikus, Jake West and Luke West.

Jesus Love Temple hosted a visitation on Saturday, October 2 starting at 9 AM with a service beginning at noon. The family asks that in lieu of flowers, donations be sent in Thompson’s name to the United Service Organization (uso.org or email [email protected]) or to the Home of the Brave (homeofthebravefdn.org).

Thompson made strong connections with others as the hundreds of posts on social media reflected when news broke that he had passed away.

“I am so sorry,” Mark Johnson posted. “He was such an influence on so many of us, but I don’t know if I have the words for the wonderful impact he had on my life, direction and general approach to things. I am so blessed to have known him.”

Trish Walder Barnyak summed up the feelings many in Milford had when they heard the news in a post directed at the family.

“Take comfort in knowing there are thousands of lives that were made better because he was part of it,” Barnyak wrote. “Five minutes in the hallways to decades of friendships. Every interaction left an impression. What an amazing legacy. Thank you for sharing him with each and every one of us lucky to have been taught or directed by him.”