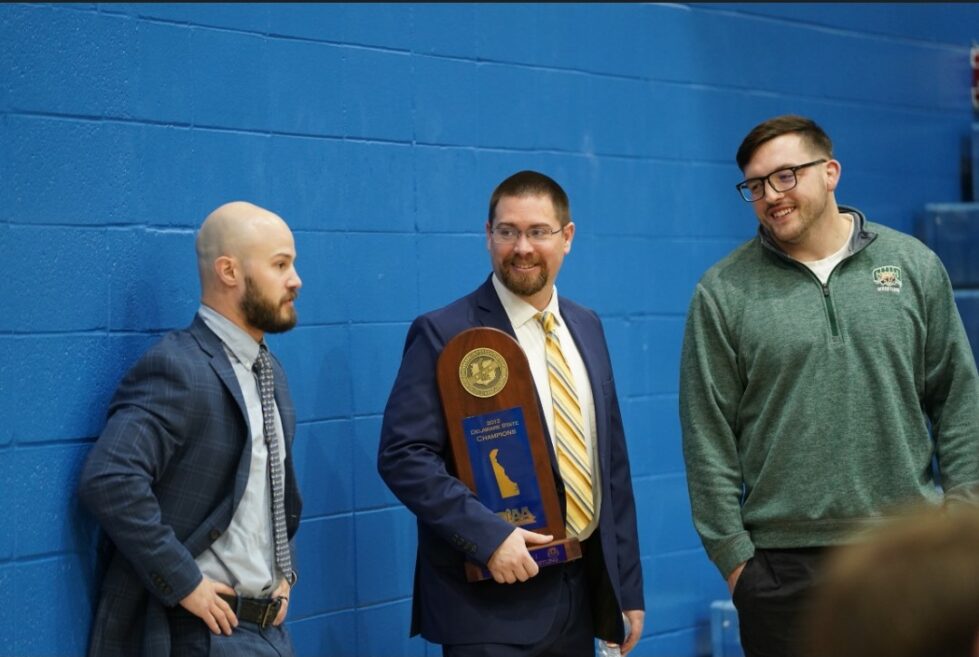 Camden – The Laurel Bulldogs wrestling team came to Camden just eleven days from a state championship football run with several of those players now transitioning to the mat. The Riders however were full steam ahead in their third dual meet of the season.

It was Alumni Day for the Riders honoring the 1982 and 2012 state championship teams prior to the match. The Riders used nine pins and a major decision in their 58-19 win over the Bulldogs in front of men that rolled in the gym forty years earlier.

“It is important for these kids to know and see the guys that were here before them, there is quite a bit of legacy here at Caesar Rodney. 14 state championships, I don’t know how many conference championships as well as a board full of state champs in our wrestling room,” Caesar Rodney head coach Trey Mitchell said.

Freshmen Nick and Nathan Moore are twin brothers who moved to the area last summer and have found themselves in the middle of the Riders lightweights.

“From the start we liked the team and the environment, we have a lot of people to practice with and get better and everybody has the goal to be a state champ and that’s good,” Nick Moore said.

The Bulldogs Stanley Pete answered for Laurel with a pin at 138 pounds, while Aiden Bell’s 13-7 decision at 150 pounds sandwiched a Riders pin at 144 by Jaxson Kopp. The Riders led 34-7.

215 pounds featured the most competitive match of the night as state placewinner from last season Brayden Hearn of Laurel won a 10-2 major decision over Owyn Meister. Joseph Baynard ended the match with a pin as Laurel won the final two bouts of the match closing the score to 58-19.

“I preach to all these guys all the time in dual meets that you have to get your points and your win first, then look bonus and then look pin,” Mitchell said.