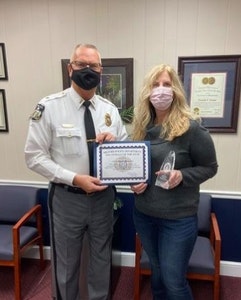 Chief Kenneth Brown announced to City Council at their regular meeting on Feb. 8 that Victoria “Vicky” Sessoms, Administrative Assistant to the Chief was named Milford Police Department “Civilian of the Year.” Sessoms began working at the city in 1996 as a clerk and moved to the police department in 1997, trading positions with Terri Hudson who is now City Clerk. According to Sessoms, she will celebrate her 25th anniversary with the city in June.

“As the chief’s administrative assistant, I pretty much cater to his needs,” Sessoms said. “I handle his calendar, schedule meetings, arrange his travel, answer his phone calls, type his correspondence, that type of thing. I also manage the budget. I am responsible for writing, submitting and monitoring all grants. The biggest part of my job is time and attendance which I have to do every two weeks. We have 50 employees who I must enter information for before submitting it to payroll. That should be a full-time job in itself.”

Sessoms was raised in the Grand Rapids area of Michigan and attended college for a short period right after high school before entering the Air Force. She moved to Delaware not long after getting out of the military in 1995. She is married and has as son and grandson. When she is not at the police department, she enjoys riding bikes, visiting the beach and spending time with her grandson. She and her husband are “foodies,” so they like visiting different restaurants.

“I love my boss,” Sessoms said when asked about the best part of her job. “He is a great chief. I also like the camaraderie here at the station. I also like being a problem solver. If someone comes to me with a problem, I like to try to come up with an answer. The customer service aspect appeals to me, finding out what someone needs and, if I can’t help, finding someone who can. It is important to me to let the public know we are not the bad guys, that we are here to help them. This is a great place to work.”

The biggest challenge Sessoms faces is gathering all the information she needs to do her job since most of the staff in the department work shift work. She also has difficulty scheduling vacations due to her payroll responsibilities every two weeks. However, she stated that she is such a routine person, she handles her challenges easily.

“Vicky goes above and beyond daily,” Chief Brown said. “Even with all her other responsibilities, she took the initiative to start a networking group with other administrative assistants in police departments around the state. We have seen a lot of value, not only here but I have other departments tell us the value they get out of that group. In doing our payroll, most of you through the city know how complicated police payroll is, but she comes in Sundays and holidays quite often to make sure that runs smoothly. She does pretty much anything asked of her and then, just from being here that long, she has become the go-to person for anyone in the department because she has a very good knowledge of the department.”

A photo of Sessoms will be placed in the lobby of the department and will remain there for a year along with a plaque naming her Civilian of the Year. When it is removed, the plaque and photo will be given to Sessoms.